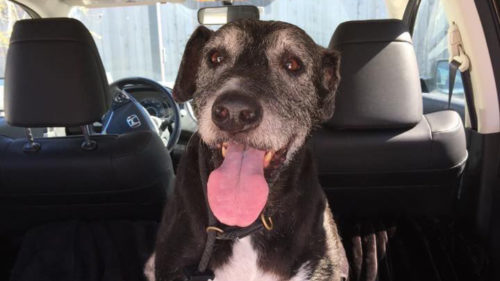 Nawiliwili Nelson, better known as Wili, is spending more than two weeks on the road in a Honda CRV with the Rev. Bill Miller, who calls dogs “God’s best work.” Photo: Bill Miller

[Episcopal News Service] The Rev. Bill Miller is taking a close friend to Las Vegas on vacation, but this trip is about the bark, not the bet.

Miller’s traveling companion is his 12-year-old dog Wili, who is dying of cancer, and Vegas is only the final stop on a six-state road trip that the Episcopal priest from Louisiana is calling the “Last Howlelujah Tour.”

“It’s been extraordinary,” Miller said July 6 when reached by phone in Corsicana, Texas, south of Dallas. “The best parts of the trip have been really what we set out to accomplish, just to spend time together. We’ve just had a ball being together.”

In addition to spending precious time with Wili, the other goals of the tour are to remind people of the spiritual importance of close relationships – whether with family, friends or “man’s best friend” – and to promote and raise money for animal welfare organizations. 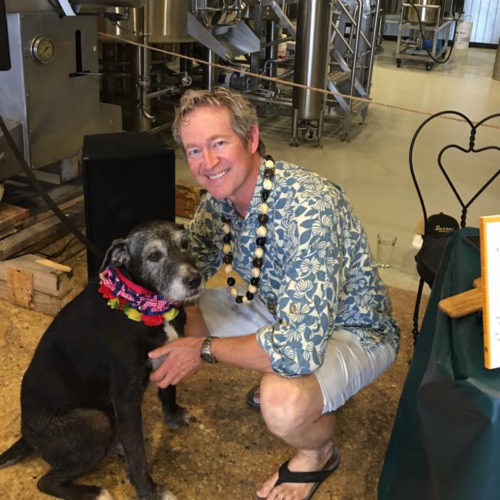 The tour will take the Rev. Bill Miller and Wili from Louisiana to Nevada, passing through Texas, Oklahoma, New Mexico and Arizona. Here they pose for photo July 4 during a stop at Barrow Brewing Company in Salado, Texas. Photo: Bill Miller, via Facebook.

The stop in Corsicana was about a week into the two-week tour, and a fundraiser there July 5 raised $1,600 for the Humane Society of Navarro County. Miller has lined up about two dozen similar events in 18 cities on his route. Miller also is the author of two books, which he sells during his visits to churches, breweries and bookstores, and part of the proceeds of those sales are added to the fundraisers.

“We have met some incredibly gracious and loving people along the way. They have shown [Wili] great hospitality,” Miller said.

Miller, a 58-year-old Texas native, has served as a priest about 25 years. He was living in Austin when he got his first dog, an Airedale named Sam, in 1993. The dog’s story of surviving a house fire became the foundation for Miller’s 2005 book, “The Gospel According to Sam.” (Miller’s other book is “The Beer Drinker’s Guide to God.”)

After Sam’s death and while serving at a church in Hawaii, Miller adopted Wili from the local animal shelter. Part terrier, Wili’s full name is Nawiliwili Nelson, a little bit Hawaiian and a little bit Texan (his nickname is pronounced “Willie”). The priest felt an immediate connection to the pup.

“He just had one of these rare outgoing personalities, and he has maintained that throughout his life, even here as he’s been dealing with cancer,” Miller said.

Miller moved to Covington, Louisiana, north of New Orleans, about two years ago to become rector at Christ Episcopal Church. And he now has three dogs, including a mutt named Sinbad and a pit bull named Mahalia Jackson Queen Liliuokalani, or Lili for short.

In November, Miller noticed Wili wasn’t eating. The veterinarian diagnosed cancer the next day, and Wili was given as little as three months to live. But that three months has extended past six months and now into the summer, with the help of surgery, chemotherapy and a healthier diet for Wili.

Miller took some time off from his work at Christ Episcopal to celebrate Wili’s improved health by embarking on their current road trip. They held a launch party on June 26 at the Abita Brewery in Covington and hit the road June 30. The tour will conclude July 16 in Las Vegas, where they have three events scheduled at Mountain View Presbyterian Church. 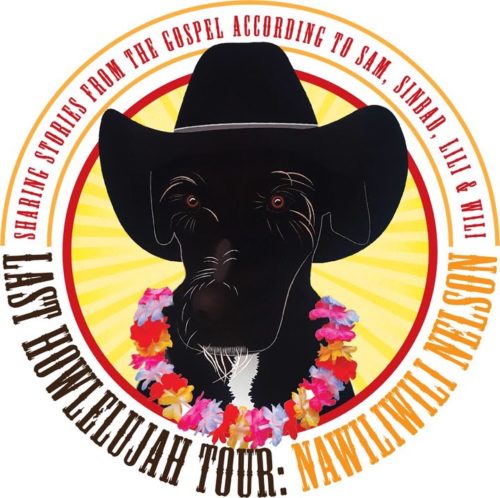 The Rev. Bill Miller is sharing dog stories with fans on the stops along his “Last Howlelujah Tour” of the South and Southwest with Wili. Photo: Bill Miller

The tour will take them from Louisiana to Nevada, passing through Texas, Oklahoma, New Mexico and Arizona, and counting the return trip, Miller expects them to cover about 5,000 miles before reaching home. He also will be preaching along the way, including Sunday, July 9, at St. Paul’s Cathedral in Oklahoma City.

But the most important thing for him, personally, is to spend time with Wili, who has a water bowl and plenty of space to rest with the seat down in the back of Miller’s Honda CRV. They’ve been thanking God for air-conditioning while navigating the hot highways of the South and Southwest. They travel light and look for cheap, dog-friendly hotels when they stop.

“Wili has not lost any enthusiasm for life and his love for people,” Miller said.

“I think what dogs teach us is how to be our best selves, because they exhibit unconditional love and affirmation,” he said. “They’re able to show us such love at every moment. They’re always happy to see us, the tail is always wagging. They take such delight in the simple things in life.”