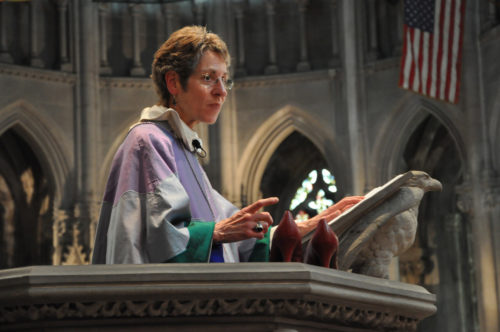 Presiding Bishop Katharine Jefferts Schori during her sermon in 2014 at Church of the Advocate uses a pair of red high heels to illustrate the expectations set upon ordained women. Photo: Mary Frances Schjonberg/Episcopal News Service

[Episcopal Diocese of San Diego] We are excited to announce the selection of former Presiding Bishop Katharine Jefferts Schori as our assisting bishop.

Jefferts Schori will begin her tenure with us on Aug. 13. She will serve three-quarters time performing episcopal functions such as visitations, confirmations, ordinations and receptions. She will share with the standing committee the task of providing leadership and vision for the diocese and shall generally perform the functions of a diocesan bishop as delegated to her by the standing committee in its capacity as the ecclesiastical authority during the transition. She will work closely with the executive council as well.

She is married to Richard Schori, a retired topology professor. Their daughter, Katharine, served 10 years in the U.S. Air Force; she separated as a major. Bishop Jefferts Schori is an instrument-rated pilot and is fluent in Spanish.

We thank you for your continued prayers as we move forward with this transition.