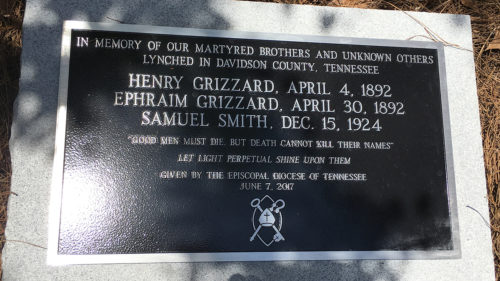 [Episcopal News Service] The Episcopal Diocese of Tennessee is leading efforts to research and memorialize lynching victims in Nashville and statewide, following in the footsteps of a prominent commission conducting similar racial reconciliation work in Atlanta, Georgia.

The Tennessee diocese, which covers the geographic middle third of the state, created its Task Force on Anti-Racism last year, and one of its first projects has been to shed new light on the racial violence buried deep in Nashville’s past. This initial focus on remembering lynching victims culminated June 7 in a Eucharistic service and memorial litany for three named victims and others whose identities are lost to history.

The task force aims to expand its work from Davidson County to the rest of the diocese. An estimated 105 lynchings occurred within the diocese’s current boundaries from 1870 to 1940, task-force co-chair Natasha Deane said in an interview with Episcopal News Service. The initial focus is local, though the Diocese of West Tennessee and Diocese of East Tennessee also are invited to join in the effort.

“Telling these stories plays a role in both education and in healing racial wounds, because when a piece of a story isn’t told, it’s a lot like undiagnosed illness,” said Deane, a retired Vanderbilt University Medical Center researcher. The racial wound “only gets worse.”

The 2014 killing by police of an unarmed black man in Ferguson, Missouri, and similar police shootings were a direct catalyst for the creation of the task force, said Bill Gittens, the other co-chair.

“We were concerned that … the shootings were a continuation of the trauma that black people in general, and black men in particular, had experienced, and it was important for us to initially say that this was enough and that we needed to not only deal with the present but also deal with the past,” said Gittens, a retired Tennessee State University administrator.

The diocese approved a resolution in 2015 calling for the creation of a task force on racism, and the next year the task force was formed, its membership a mix of clergy and lay people. Gittens said the group saw its mission not as political but as church-centered, invoking the Book of Common Prayer and the baptismal covenant’s call to strive for justice and respect the dignity of all people.

That call has been taken up churchwide in the many General Convention resolutions through the years focused on racial reconciliation. The Episcopal Church stresses that racism is a sin that must be overcome – by worshipers and by the institution itself.

A resolution approved at the 1991 General Convention, for example, committed the church to “addressing institutional racism inside our Church and in society,” and a 2000 resolution lamented “the historic silence and complicity of our church in the sin of racism.”

The church amplified its call to racial reconciliation this year when it released “Becoming Beloved Community,” a guide for Episcopalians to work toward racial healing.

“You’re looking at a path for how we, as the Episcopal branch of the Jesus Movement, can more fully and prayerfully embody the loving, liberating, life-giving way of Jesus in our relationships with each other,” Presiding Bishop Michael Curry said in a May news release unveiling the guide.

The work of the Diocese of Atlanta’s anti-racism commission is often cited when discussing such churchwide efforts. That commission also named itself Beloved Community, and its success in developing church-mandated anti-racism training has served as a model for other dioceses.

In October, Atlanta’s Beloved Community: Commission for Dismantling Racism launched a three-year series of pilgrimages to sites of lynchings in Georgia, starting with a trip to Macon.  One of the members of the Tennessee Task Force on Anti-Racism attended the Macon pilgrimage and brought the idea of honoring lynching victims back to Nashville.

Since then, the Diocese of Tennessee’s task force has been busy. In addition to researching lynchings in Davidson County’s history, it held a ceremony in February to honor Absalom Jones and a march in April to commemorate a key moment in Nashville’s history, the 1960 bombing of the home of civil rights leader Z. Alexander Looby.

Lynchings have been described as a kind of racial terrorism, using fear to keep blacks, as well as white sympathizers, from challenging white authority. Lynch mobs were most prevalent in the South in the late 1800s and the first half of the 20th century, and these brutal killings often were enabled by local institutions, from police departments to Christian churches.

“We say truly their blood is on our hands, and we come to you asking forgiveness,” the Rev. Nontombi Naomi Tutu said in her sermon at the June 7 service, according to the Nashville Tennessean. Tutu, a longtime Nashville resident, was born in South Africa and is Archbishop Desmond Tutu’s daughter. “Let us remember that in claiming their stories, we are claiming our own humanity.”

About 150 people attended the service at Fisk University, Deane and Gittens told ENS. Afterward, they processed to St. Anselm’s Episcopal Church to dedicate a memorial marker donated by the Diocese of Tennessee. “In memory of our martyred brothers and unknown others lynched in Davidson County, Tennessee,” the marker reads above the names of the three identified victims: The brothers Henry Grizzard and Ephraim Grizzard, and Samuel Smith.

Catherine Meeks, the chair of the Beloved Community commission in Atlanta, attended the service in Nashville and praised the work of the Diocese of Tennessee’s task force.

“I was really just very pleased, and very humbled that our work had been an inspiration to them,” Meeks told ENS.

Since then, Deane and Gittens said they have been contacted by people interested in conducting research on other lynching victims. One was a relative of a victim, the other a Baptist minister. The Episcopal task force connected each with an Episcopal congregation to assist.

The task force hopes to enlist more congregations to take up the cause locally and conduct research mirroring the effort in Nashville.

“This is an attempt to begin some sustained dialogue in the hopes of raising awareness,” Gittens said.