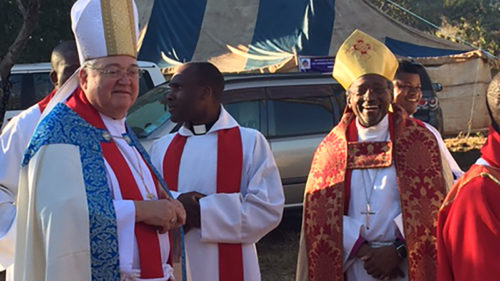 [Episcopal News Service] Presiding Bishop Michael Curry traveled this month to Zimbabwe to attend an annual festival for the martyred 19th century missionary Bernard Mizeki and delivered a sermon there to more than 15,000 pilgrims from across Central and Southern Africa.

Curry was invited to the festival by Bishop William Jay Lambert of the Episcopal Diocese of Eau Claire, Wisconsin, who first attended in 2015. Lambert called Curry’s June 17 sermon “the best sermon he’s ever given.”

“I had hoped that that crowd would fire him up and he in turn would fire them up, and that’s what happened,” Lambert told the Episcopal News Service by phone.

Curry spoke of the Jesus Movement, one of his recurring themes as presiding bishop, and he emphasized Matthew’s account of the Great Commission, saying “go, therefore, and make disciples of all nations.” The repetition of that passage in Curry’s sermon eventually prompted to the crowd to respond by chanting “Go!” over and over.

“The energy was palpable, and the depth of feeling profound,” said the Rev. Chuck Robertson, canon to the presiding bishop for ministry beyond the Episcopal Church. Robertson was part of the American delegation that traveled to Zimbabwe for the Mizeki festival.

Mizeki was born in Mozambique in the mid-1800s. As an adult working in South Africa, he became a Christian in 1886 and helped translate Anglican sacred texts into African languages. Then from 1891 until his death in 1896, he served in what is now Zimbabwe as a missionary who converted many of the Mashona to Christianity.

Although Mizeki became well-versed in the local language and was sensitive to the Mashona’s spiritual traditions, his missionary work angered some African nationalists who saw such work as an extension of European colonial influence. He was speared to death outside his hut on June 18, 1896. Those on their way to help him reported seeing a great light and hearing the sound of wings. When they arrived, Mizeki’s body was gone.

“I have been reading and telling the story of Bernard Mizeki for years, at midweek Eucharist, both as a parish priest and a bishop,” Curry said in a emailed statement. “He is one of the holy people we remember in Lesser Feasts and Fasts and then Holy Women Holy Men. So I often told her read his story. But until I went to Zimbabwe for the Bernard Mizekei commemoration I didn’t realize how profoundly the sacrifice of his life gave birth to the church in a new way.” 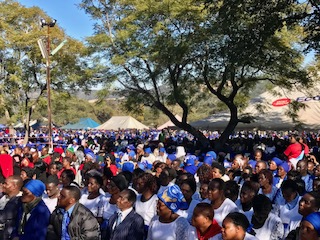 A crowd of about 15,000 attended the outdoor worship service June 17 at the Bernard Mizeki festival in Zimbabwe. Photo Sharon Jones

The annual festival in Mizeki’s memory regularly draws 20,000 or more pilgrims, and it is held not far from where he was killed 121 years ago.

Lambert learned of the festival through Eau Claire’s companion diocese relationship with the Anglican Diocese of Harare, Zimbabwe. He journeyed to Harare for the festival for the first time in 2015, shortly before Curry was elected presiding bishop at the General Convention meeting that year in Salt Lake City.

“I knew right then and there I’d like to have him in Zimbabwe to preach at the Mizeki festival,” Lambert told ENS.

He posed the idea to Curry, who added it to his calendar for 2017.

The service itself was celebrated on a grand scale, lasting more than two hours. All 15,000 worshipers were able to receive the Eucharist through stations set up all around the field where the service was held, with Harare Bishop Chad Nicholas Gandiya presiding.

“Somewhere between 15,000 and 20,000 Anglicans gathered for a three-day series of services, preaching, teaching, singing, dancing,” Curry said this week. “It was a three-day Anglican revival. And it bore witness to the truth that the blood of the martyrs is indeed the seed of the church.”

Lambert described the crowd’s response to Curry’s sermon as “one of the most passionate things I’ve ever witnessed.”

Afterward, Curry joined a group of church leaders who planted trees nearby. Robertson said this was part of Gandiya’s initiative aimed at reversing the tide of deforestation in the region.

“The presiding bishop and those of us who accompanied him gave thanks for the opportunity to witness and participate in an occasion that truly was a foretaste of the great heavenly celebration to come,” Robertson said.

It was an honor, Lambert said, to have Curry join the American delegation on the trip this year.