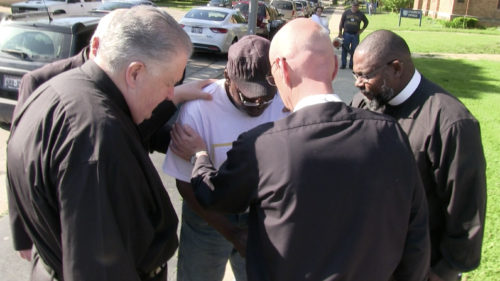 Clergy members from the Milwaukee area pray with Luria Sampson, center, during a Collars on the Corner session in May at West Center and North 51st streets. Photo: David Paulsen/Episcopal News Service

[Episcopal News Service – Milwaukee, Wisconsin] Luria Sampson had plans Saturday morning, and they didn’t include prayer – not at first.

Driving east down West Center Street in Milwaukee, he was on a course for his daughter’s house, his thoughts focused on her safety in a city suffering through a surge in shooting deaths. But when he slowed for the stoplight at 51st Street, an unexpected sight gently altered his morning travels.

Sampson, 59, stopped his car, and prayer found its way into his plans.

He turned to park the Pontiac Vibe next to St. Catherine’s Catholic Church, exited the car and, grabbing his cane, walked up to the sidewalk where men dressed in black and wearing white clergy collars were waiting to greet him.

It is called Collars on the Corner, a public ministry that an Episcopal deacon and Roman Catholic deacon launched after a Milwaukee police shooting last August. The killing of a black man during a chase by an on-duty city officer, also black, sparked days of protests and unrest in the Sherman Park neighborhood and thrust the city’s stark segregation into the national spotlight.

Although the Episcopal Diocese of Milwaukee’s congregations are well represented in the city’s surrounding suburbs, there are no Episcopal churches in city neighborhoods with majority black or Latino populations. Despite lacking a structural presence, the diocese’s commitment to a personal presence in such neighborhoods is embodied by the Rev. Kevin Stewart, the diocese’s missioner for community engagement.

Stewart has spent much of the past year growing the ecumenical Collars on the Corner ministry with fellow deacon the Rev. Jim Banach, with the Roman Catholic Archdiocese of Milwaukee. They invite clergy of all denominations to join them outside collecting and responding to prayer requests, and they encourage churches to host the ministry on their own nearby corners.

The intersection at Center and 51st is the unofficial home base for Collars on the Corner. On this Saturday morning in May, the warm sun rose over the sidewalk at the corner where a card table was set up. Taped to the side was a sign that read, “Prayer Requests.” Atop the table, a prayer box invited submissions.

“We’d be happy to pray with you right here and now,” Stewart announced.

“Yes, please do. I could use a good prayer,” Sampson replied.

The men gathered in a huddle as one of them, the Rev. Anthony Luckett of the nondenominational Saint Paul Church, led the prayer. Luckett called on God to bless Sampson and his family and give him strength as he spreads his compassion to those around him.

The prayer lasted little more than a minute. After tearfully offering his thanks and shaking hands, Sampson continued on, leaving the men in white collars to await their next prayer requests.

Praying here has become a routine Stewart repeats every Saturday morning, as his schedule and the weather will allow. He and Banach teamed up last year after discussing their shared desire to get outside and connect with Milwaukee-area residents in new ways.

“My understanding of scripture is Jesus spent more time out on the streets than Jesus did in a building, so we felt that we should go,” Stewart said. “But go where, and do what?” 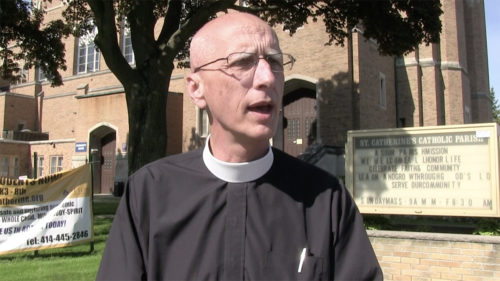 The Rev. Kevin Stewart, the Diocese of Milwaukee’s missioner for community engagement, talks in May about his work on the Collars on the Corner ministry. Photo: David Paulsen/Episcopal News Service

They settled on this street ministry, offering a handshake or hug and a prayer – and wearing their white collars so their calling and purpose would be immediately discernible to passersby. Banach, who was familiar with St. Catherine’s Catholic Parish, suggested the location even before the police shooting in Sherman Park brought wider attention to the neighborhood.

“I thought to myself, it’s busy. There’s a need. This tends to be a pretty proactive social justice parish. I bet if we ask, they’ll say yes,” Banach said. “Then Sherman Park happened.”

Three weeks later, they set up their first Collars on the Corner in front of St. Catherine’s. They found people were hungry for personal and spiritual connection, Stewart said. “They were hungry to pray, on day one.”

Deacon is force for street-level ministries

Stewart, 60, has a track record of addressing hunger. After being hired by the diocese as missioner in 2011, he founded the Hospitality Center in Racine as an outreach ministry of St. Luke’s Episcopal Church. The day center, under Stewart’s leadership, became known in the community and the diocese for its success in providing food and services for the homeless.

“Kevin has a gift for meeting people where they are, learning and listening to their needs and then building a community to address these needs,” Milwaukee Bishop Steven Miller said in an email to Episcopal News Service.

In 2015, with the Hospitality Center well established in Racine, Stewart stepped down to turn his focus to Milwaukee, where the diocese was looking to create ministries that would respond to the city’s sudden spike in deadly violence. The number of homicides in the city hit 145 that year, the most in two decades, and the number of nonfatal shootings had been on the rise since 2010, the Journal Sentinel reported while noting that the causes were hard to pin down.

“As a diocese, we are committed to making a difference in Milwaukee,” Miller said. “This ministry of building relationships is the beginning.”

Stewart was given the freedom to venture into the community, listen to residents and local leaders and use what he learned to develop new ministries, like Collars on the Corner.

That ministry continued to grow in the fall, but over the winter, Stewart and Banach moved it indoors. They distributed prayer boxes across the Milwaukee area, and Stewart now collects prayer requests weekly from 25 locations, including seven congregations and 12 laundromats, from Cedarburg to Waukesha to Racine. He then sends them out to an expanding prayer chain, by email and on Collars on the Corner’s Facebook page.

“To maintain my sobriety,” reads one prayer request.

Another asks for prayers “for my family’s safety and happiness. I also ask you to pray for my strength to overcome things that bring me down.”

The collars returned to the corners in the spring, with prayer request stations set up in downtown Waukesha, in Milwaukee’s Bayview neighborhood and at multiple anti-violence events in Milwaukee. And while Stewart and Banach work to involve more churches, they maintain a regular presence at Center and 51st.

“The beauty of it is we’ve already got some friends in the neighborhood,” Banach said. “They see us out here and they come running.” 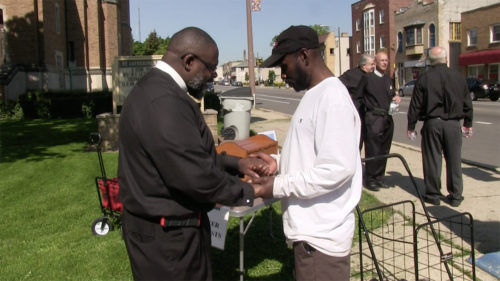 The Rev. Anthony Luckett of the nondenominational Saint Paul’s Church prays in May with Darren Haywood on the corner of West Center and North 51st streets in Milwaukee. Haywood, 48, has grown used to seeing the men in collars here Saturdays and asked them to pray to stop the violence plaguing the city. Photo: David Paulsen/Episcopal News Service

Some of the foot traffic on this corner is generated by St. Catherine’s Saturday food pantry. Jacqueline Garcia, 46, said she stops by the food pantry once a month, but this was her first time seeing the prayer request station.

Stewart prays with Jacqueline Garcia, 46, who was stopping by a nearby food pantry when she saw the Collars on the Corner. Photo: David Paulsen/Episcopal News Service

She and her friend, Micha Jones, 38, each scribbled their prayers on paper and put them in the box. Then, over the sound of cars cruising by on Center Street and the drone of the lawnmower at St. Catherine’s, they prayed – Jones with Luckett and Garcia with Stewart.

By the time they were done, tears were running down Garcia’s cheeks. Jones had been similarly moved by her prayer, and “I don’t cry for nobody,” she said after regaining her composure.

Jones said she sometimes attends church services, but not regularly. That tenuous connection to a physical church is common among the people served here, but these sidewalk parishioners need not be churchgoers. The goal of Collars on the Corner isn’t to fill the pews.

Stewart recalled welcoming someone on the corner who feared going back to church. The person had been away “too long” and had “done too much wrong.”

“Maybe that person will walk inside a church door again, we don’t know,” Stewart said. “But on that day, the church was out here meeting people where they’re at.”