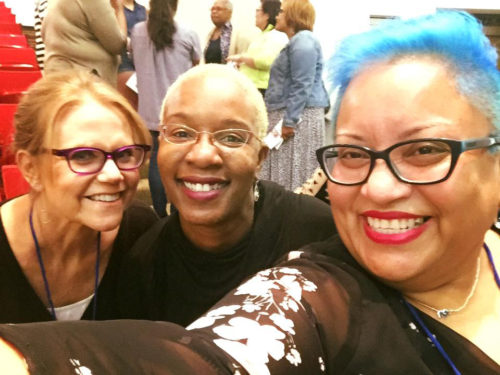 Sandra T. Montes, right, a consultant with the Episcopal Church Foundation, takes a selfie with the Rev. Stephanie Spellers, canon to the presiding bishop for evangelism, reconciliation and creation, center, and Denise Treviño-Gomez, missioner for intercultural development in the Diocese of Texas, during the Episcopal Women’s History Project conference underway at the Maritime Center in Maryland. Photo: Sandra T. Montes via Facebook

[Episcopal News Service – Linthicum Heights, Maryland] The Rt. Rev. Jennifer L. Baskerville-Burrows was deep into her sermon, rhythmically invoking the names of a great cloud of witnesses whose presence was deeply felt by those who gathered near Baltimore this week for the Episcopal Women’s History Project conference.

“You know them, women like Pauli Murray; say her name!  Verna Dozier; say her name!  Margaret Bush, first black woman to serve in the House of Deputies; say her name,” said Baskerville-Burrows, the newly-elected bishop of Indianapolis and the first black female bishop diocesan elected in the Episcopal Church. “Shout them out! Who else? Say her name! The Rev. Carmen Guererro; say her name! Shout out these names to our children, so they know who they are.”

The June 12-15 conference, the first in the group’s history to focus on women of color, brought together lay and ordained women from across the country. Araceli Ma, who works with the Latino ministries in the Diocese of Washington, said she came to ensure a Latino presence at the conference and to show her two daughters, ages 13 and 10, the opportunities open to them.

During their time together, the women shared stories of their own hopes and challenges, often finding an overwhelming sense of connection in their particular experiences.

“My story is our story,” Baskerville-Burrows said during her June 12 homily.

The Rev. Matilda Dunn, president of the History Project, said planning for this year’s conference began about two years ago. The project had been collecting oral histories and stories from women throughout the Episcopal Church, from the famous to the faithful parishioners and altar guild members who often form the backbone of a parish.

“We need to honor them because they’re also doing the work of the church,” she said. “It’s important to me because the history has to be kept for all of us, men and women.”

Yet, Dunn and others felt a need to set aside some time for women of color to honor and celebrate their collective history. Working with the Rev. Nan Peete, they secured Baskerville-Burrows as homilist and the Rev. Kelly Brown Douglas, newly-appointed dean of the Episcopal Divinity School, as the keynote speaker. The conference opened Monday, the 87th birthday of the Rt. Rev. Barbara C. Harris, the first woman ordained a bishop in the Anglican Communion.

On the morning of June 13, Douglas urged those attending the conference to speak the truth about their experiences and how their lives have shaped their view of the world.

During her address, she cited recent census statistics to offer a glimpse of the struggles and challenges faced by many women and in particular women of color. About 25 percent of all black and Hispanic women live poverty, with the figure reaching 28 percent for Native American women. Consequently, children also suffer. Poverty rates range from 13 percent of Asian children to 36 percent of African-American children, said Douglas.

“Given these facts, what does all of this mean to us who are gathered here?” said Douglas. “We are called to show forth what it means to be church. We are called to remember [Jesus] by acting and doing as he would in the world.”

For Douglas, Jesus’ encounter with the Samaritan woman as told in Gospel of John, was a perfect example of how one crosses social barriers, lays aside social privilege and finds true and authentic communion. She reminded them that even though their lives have brought them inside the world of the Episcopal Church, they often remain outsiders with a unique perspective. She also urged them to find common ground with the women who were not in the conference center, where dessert trays and coffee urns filled the tables outside the air-conditioned meeting room.

“The Samaritan women of our day are the women who look like us,” she said. “It is to these women that we must be accountable.”

During a question-and-answer session following the keynote address, Grecia Adriana Rivas, who lives near San Diego, California, spoke of the fear and anxiety rampant in the immigrant and undocumented communities in recent months. U.S. Immigration and Customs Enforcement (ICE) agents are seen patrolling the county fair, or keeping an eye on churches, she said.

Douglas responded with a repeated call for solidarity.

Throughout the conference, the women spent time questioning the meaning of diversity, the practical aspects of being a welcoming church, and the cultural histories each brings to the church. During worship, when they were invited to pray the Lord’s Prayer in the language of their hearts, the familiar words might be heard in English, Spanish or Navajo.

The Rev. Cornelia Eaton, a deacon who serves in the Diocese of Navajoland, mentioned the painful story of Fort Sumner, New Mexico, where in the 1860s the U. S. government forcibly moved thousands of Navajo off their land to live in miserable conditions on the Bosque Redondo. The relocation effort failed and after a few years, the Navajo were returned to their homes. But, the story lives on and the fort and its environs are remembered as “the place of suffering,” said Eaton.

“We are all weavers of many cultures and traditions,” she said. “I became a weaver of the Christian tradition and the Navajo tradition.”

Some of the stories shared involved quirky encounters that resonated with those in attendance and brought laughter to the room. Sandra Montes, who is Afro-Peruvian and is from the Diocese of Texas, recounted a time when she and her mother were shopping for greeting cards in Boston, Massachusetts. Montes said that as they were laughing and reading the cards, two older white women walked up to them and said: “’The Mexican cards are over there.’” Montes said she and her mother looked at the women and replied: ‘”But we’re Peruvian.’”

The Rev. Yein Esther Kim, ordained in 2014 from the Episcopal Divinity School and now serving in the Diocese of Los Angeles, shared that “showing up” can take on a particular nuance for a woman of color.

“When they feel [an event] is not diverse enough, or multicultural enough, they’ll invite me, as if I could bring them just a little diversity,” said Kim, who is Korean-American. “So, I go, because nothing will happen if I don’t show up.”

Indeed, the value of showing up, of being seen and bringing their voice to the cultural conversation, whether in marches, on social media, or in the life of the Episcopal Church was not lost on the women.

”God is faithful—so let us be as well,” Baskerville-Burrows said during her opening homily. “Women of color will not be erased. We will not be made to be invisible.  Let us learn to see as Jesus sees.  For God says to us all, not the least to women of color in the church, “I see YOU”.

— The Rev. M. Dion Thompson is a priest in the Diocese of Maryland.