Executive Council’s Joint Standing Committee on Advocacy and Networking for Mission conducts its business June 10. During the council meeting, other members jokingly referred to the committee as having the best view of any of the committees, most of which met in rooms without windows. Photo: Mary Frances Schjonberg/Episcopal News Service

[Episcopal News Service – San Juan, Puerto Rico] The Episcopal Church’s Executive Council spent three days in a historic meeting here marked by relaxed conviviality during which the members trained their sights on the next General Convention, a year from now.

This was the first time that council met in a Province IX diocese since February 2008 and it is believed to be the first meeting ever in Puerto Rico. Presiding Bishop Michael Curry said during a post-meeting news conference June 11 that it was important for council to have come to the U.S. territory “as Puerto Rico is struggling and seeking to discern its future.”

Puerto Ricans voted that day to become the country’s 51st state. The vote was contentious and attracted the fewest number of people to the poll since 1967. Most observers say that the Republican-controlled U.S. Congress will never grant Puerto Ricans’ request, in part because the territory leans towards the Democratic Party.

Puerto Rico’s economy has been in a recession for nearly a decade, many residents live in poverty and last month it was forced into the largest municipal bond market bankruptcy in U.S. history. That bankruptcy has destroyed the savings of many Puerto Ricans. Many residents resent the fact that they pay in full for Medicare, Medicaid and Social Security but can only collect a smaller amount of benefits compared to other U.S. citizens. Those benefits are now facing cuts from the Trump administration.

Curry said the diocese is “serious about being an instrument” that can fill the gaps in medical and other social service needs.”

As Executive Council prepares for the 79th meeting of General Convention July 5-13 next year in Austin, Texas, the churchwide budget is getting a lot of attention. Its Joint Standing Committee on Finances for Mission constructs the proposed budget to present to the entire council for its approval. According to Joint Rule II.10.c.ii (page 227 here), council must give that proposed budget to the Joint Standing Committee on Program, Budget and Finance (PB&F) no less than four months before the start of convention (essentially by February of convention year). Council has two more meetings before that deadline, Oct. 18-21 and Jan. 22-24.

The FFM committee spent much of the Puerto Rico meeting continuing to sort through the large amount of information it has received in beginning steps of a budgeting process that has reached deeper into the workings and financing of the churchwide mission and ministry than has previously been the case. The committee also met on its own in mid-May, an unusual move by one of council’s committees, and plans additional meetings in the coming months.

“We will be presenting a draft budget in the near future for your review,” FFM chair Tess Judge told the entire council on June 11. 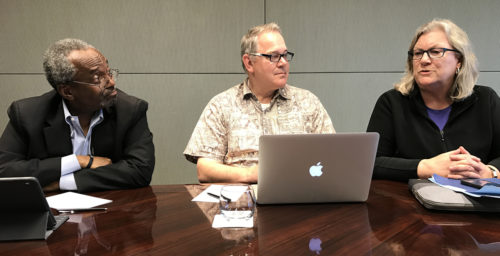 During the post-meeting news conference, the Rev. Gay Clark Jennings, president of the House of Deputies, praised the budget process thus far. “I have seen some budget processes that have been contentious, difficult, painful, draining,” she said of her time on council. “Budget work is hard especially when any organization has big dreams and has restraining forces regarding the amount of money” available.

“This time it has been a partnership between Program, Budget and Finance, Executive Council, the churchwide staff and the officers,” she said.

Jennings acknowledged that there are some unknowns in the process at this point “but it hasn’t been tense; it has really been quite creative.”

That partnership and creativity hint at a growing and perceptible change in feeling of council meetings. Partially, Jennings said, the change is due to what she said is a common tipping point that is often achieved near the halfway point of a triennium. The workings of council, she said, begin to mesh new members who feel that they have their stride with the members who will finish their six-year terms at the end of the next convention.

She added that this particular group of council members, staff and the officers have clarified their roles and responsibilities with the aim that “we’re in a partnership; we all have one goal in mind, which is building up this beloved Church and our mission and ministry.”

“This council laughs. We do hard work and have difficult conversations and we debate and we wrestle and we try to figure things out, but we also laugh and there’s something just profoundly human and helping and healing” about the ability to do all those things, he said.

The Rev. Michael Barlowe, executive officer of General Convention, attributed some of the change in feeling to another practice. Early at the beginning of the triennium the officers of the Domestic and Foreign Missionary Society committed to daily prayer for each other, by name, and to regularly meet together, not just to conduct business but get to know and better understand each other.

“I think when the leadership of the Church prays and spends time together, that has a profound change on everything,” he said. 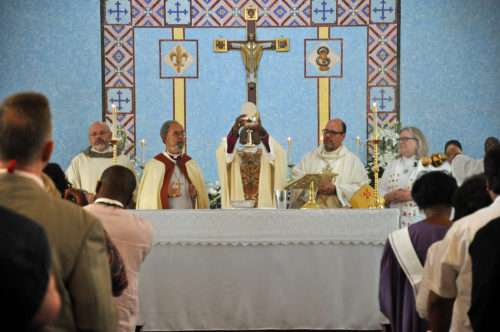 During its final plenary on June 11, Council took several other actions, some of which are detailed below. A complete list of resolutions is here.

Among those actions was one to expand the types of data collected in the annual parochial report. Each Episcopal Church congregation files the report that is, essentially, the Church’s official data-gathering instrument. The major revision involves adding an entire page to the report to gather information about each congregation’s outreach ministries and volunteer activities. The report will also have a question to identify languages used in worship services.

The revisions will pertain to activities in 2017. The parochial report is completed early in the following year. The recommendations came to council from the House of Deputies Committee on the State of the Church in response to General Convention 2015 Resolution A084.

* Consented to Curry and Jennings’ appointment of an acting chief legal officer. General Convention created the canonically required position during its 2015 meeting. The name of the person will be released as soon as the appointee has been notified. Council met in executive session to discuss the appointment before consenting to it during the meeting’s last plenary session. 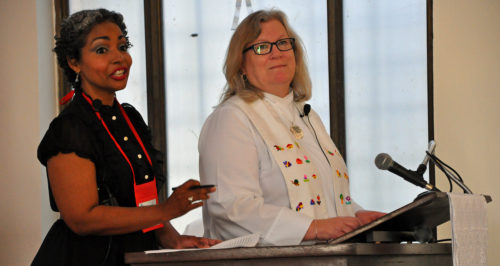 The Rev. Gay Clark Jennings, president of the House of Deputies, listens June 11 as Dinorah Padro translates her sermon during Eucharist at the Cathedral of St. John the Baptist in San Juan, Puerto Rico. Photo: Mary Frances Schjonberg/Episcopal News Service

* Established a committee to continue to support and understand the role of Historically Black Colleges and Universities and the important relationship with those schools. The committee will be made up of the members of the council’s task group formed in early 2015, along with other appointees. Council charged the new committee to make recommendations to council by General Convention 2021 on the long‐term needs of the schools to ensure access to students of color for future generations.

* Received a recommendation from the Rev. Michael Barlowe, executive officer of General Convention, that it consider returning to a four-day meeting pattern in the 2019-2021 triennium. Council had discussed that possibility earlier in this triennium. Barlowe, who is also council secretary, suggested that council revive its previous tradition of holding its meetings in each of the Church’s nine provinces over the course of the triennium. “Obviously, that has budgetary implications,” he said of his recommendation, which is dependent, in part, on the amount of money General Convention budgets for council. Convention meets again in July 2018. Council has typically held three-day meetings this triennium. Council has not had a four-day meeting schedule since the 2004-2006 triennium. The move to a three-day pattern happened, in part, after General Convention reduced council’s budget for the 2007-2009 triennium. The other concern was a concern that three annual four-day meetings made it hard for younger, working people to serve on council.

The June 9-11 meeting took place at the Condado Hilton Plaza.

Previous ENS coverage of the meetings is here. Some council members tweeted from the meeting using #ExCoun.