Presiding Bishop Michael Curry suggested that Episcopalian ought to look to the biblical hero Esther for a model. Set during the time of Jewish exile in Persia, she was initially seen as the beautiful, obedient, and relatively passive woman who was queen to the king of Persia. She came to believe that she was called to save her people and used rhetoric to persuade the king to save her Jewish people living in exile in Persia. Up until then, she had not revealed her Jewish identity.

“I say this with all humility, I really do: Perhaps this Episcopal Church has come to the kingdom for such a time as this,” Curry said.

He said such a time as this is a “strange national, cultural and global moment – when things are being turned upside down, when old patterns don’t work anymore, when the old rules don’t even seem to apply anymore, truth doesn’t seem to be what the truth used to be, and all of a sudden what’s wrong is right.  All of a sudden, even Christianity is co-opted by injustice, by lack of compassion, by inhumanity, by indecency.”

The Church has had many slogans and campaigns, the presiding bishop said.

“Yet, I don’t believe this is not a new slogan, a new campaign, a new program. In fact, it’s nothing new at all,” he said. “The truth is what we’re talking about now is a way of following Jesus. It is about being formed as followers of Jesus and, out of that, making a witness in the world that makes difference and bearing witness to a way of being Christian, which doesn’t sound like much” but deeply matters when “even Christianity has been hijacked.”

Curry, saying he feared he might be treading on dangerous ground, urged Episcopalians to listen to political rhetoric with what might be called biblically-informed ears. “When you sometimes listen to voices that portend to represent Christianity in our public life and public sphere, listen carefully to what is said and what is not,” he said. Do you hear the words of the Sermon on the Mount, or Matthew 25, the summary of the law or Jesus’ words at the Last Supper about love and serving others, he asked. 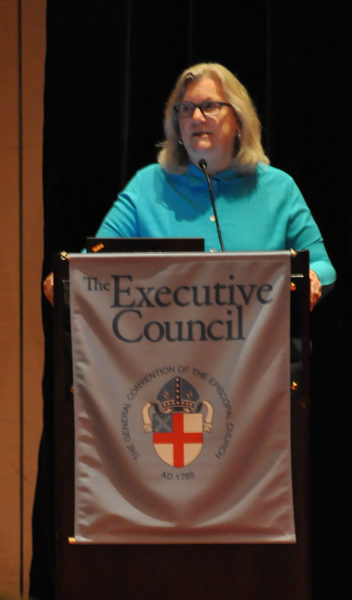 House of Deputies President the Rev. Gay Clark Jennings echoed those sentiments in her opening remarks. This, she said, “is a very difficult time in the United States to be a Christian committed to justice and peace among all people and the dignity of every human being, and it is good to come together in the midst of that difficulty.”

Jennings said she is especially paying attention to three things: the treatment of refugees across the world; the specific treatment of refugees in Texas, along with that state’s efforts to pass a so-called “bathroom bill”; and the Church’s on-going response to caring for creation and President Donald Trump’s decision to withdraw the United States from the Paris Climate Accord.

The Episcopal Church is scheduled to meet July 5-13, 2018, in Austin, Texas, and Jennings said, “we are watching the situation closely with an eye to ensuring the safety and dignity of everyone traveling to General Convention next summer.”

Texas Senate Bill 6 would require transgender people to use bathrooms in public schools, government buildings and public universities based on what the bill calls their “biological sex” as stated on their birth certificate. The bill would also overturn local nondiscrimination ordinances in cities like Austin, Dallas and San Antonio.

The state Senate has passed the bill but the House has not acted. Texas Governor Greg Abbott has called the legislature back for a special session beginning July 18 and said that he wants legislators to pass the bill.

Curry and Jennings wrote a letter to Texas Speaker of the House Joe Straus in February, thanking him or his stand against the bill. However, the letter notes that the Church moved General Convention from Houston to Honolulu in 1955 because the Texas city could not offer sufficient guarantees of desegregated housing for its delegates.

“We would be deeply grieved if Senate Bill 6 presented us with the same difficult choice that church leaders faced more than 60 years ago,” Curry and Jennings wrote.

Jennings told council that she, Curry and others are also watching the legal challenges to Texas Senate Bill 4, which threatens law enforcement officials with stiff penalties if they fail to cooperate with federal immigration authorities. The bill also allows police officers to question people about their immigration status during arrests or traffic stops.

Jennings praised Curry’s recent statement on Trump’s decision to pull the U.S. out of the climate accord. She called on Episcopalians to ensure “that our decades-long witness to the stewardship of God’s creation and the compatibility of science and faith remain strong and steady during this perilous time for our planet.” She said it was appropriate for council to think about the issue in Puerto Rico, which she said is “one of the most vulnerable places on Earth to the impacts of climate change.”

After the opening plenary on June 9, council spent the rest of the day meeting in its five committees. On June 10, council member Bishop Edward J. Konieczny of Oklahoma will lead his colleagues in a discussion of the recent Unholy Trinity conference, that was meant to find and commit to working toward solutions to the problems of poverty, racism and gun violence. Council, staff members and guests will travel to the Cathedral of St. John the Baptist for Eucharist on the morning of June 11. That afternoon, council’s committees will each report to the full body, proposing resolutions for the full body to consider.

The June 9-11 meeting is taking place at the Condado Hilton Plaza.