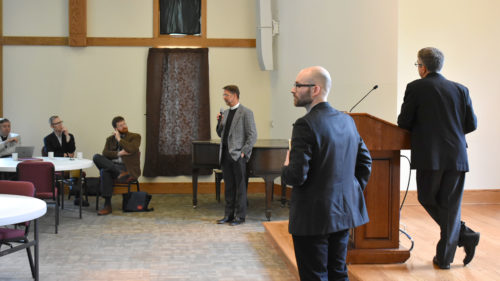 [Episcopal News Service – Nashotah, Wisconsin] The Anglican Communion and the Episcopal Church have wrestled with pointed internal divisions for more than a decade, leading some to identify this as a “broken” communion. The path forward, as described to the dozens attending a conference here this week, first will require looking backward, as well as further inward.

“We didn’t want to try and present the idea of division as if it was a recent phenomenon,” said the Rev. Andrew Grosso, associate dean for academic affairs at Nashotah House Theological Seminary.

Instead, Nashotah House teamed up with the Living Church Foundation to host this week’s conference, “Living Sacrifices: Repentance, Reconciliation and Renewal,” to illuminate the deeper historical and theological context of recent Anglican divisions.

“Our conviction is, to resolve Anglican differences and disagreements, we need to go back to older and richer discussions about the nature of the church, what is the church, in scripture and in history, and ecumenically,” Living Church Foundation Executive Director Christopher Wells said.

The four-day conference that ended June 9 drew 50 to 75 attendees – a mix of clergy, professors, students and lay people interested in the topic – to this 175-year-old Episcopal seminary in rural Wisconsin. Grosso and Wells said they hoped attendees will take what they’ve learned and incorporate these resources for healing into their churches, their classrooms and their conversations with other Christians.

Often divisive topics hinder conversation. Wells alluded to the conference’s opening presentation June 6 by Archbishop Josiah Idowu-Fearon, the Anglican Communion secretary general, who noted that Anglicans and Episcopalians sometimes find it easier to talk to other Christian denominations than to establish internal dialogue.

Ecumenical dialogue was a specific focus of the conference’s first full day, June 7, including a presentation by Sister Susan Wood, a Roman Catholic nun who teaches systematic theology at Marquette University in Milwaukee.

Another Marquette professor, the Rev. Michael Cover, kicked off the presentations June 8 with a detailed analysis of Paul’s letter to the Romans, which supplied the name of the conference, “Living Sacrifices.” Cover, a New Testament professor, said the Anglican Communion is in a “Romans moment,” highlighting both the Communion’s missional character and its historical connection to Rome.

The concept of the Christian church in a constant state of movement underpinned the conference’s marquee presentation, by the Rev. Ephraim Radner, a pre-eminent conservative Episcopal theologian. 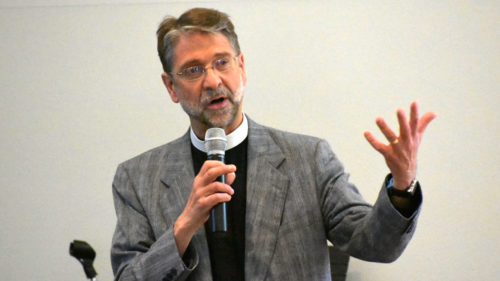 The Rev. Ephraim Radner, professor at Wycliffe College in Toronto, speak June 8 at the “Living Sacrifice” at Nashotah House.

For Radner, a professor of historical theology at Toronto’s Wycliffe College, Christianity has never been fixed to one place, geographically or theologically, but constantly moving and evolving, and “each church … cannot possibly ever be the definitive referent of the finished work of God.”

The proposal he laid out in his presentation was the formation of a new Anglican synod, a communion-wide body empowered to initiate voluntary faith conversations that would seek common ground on spiritual issues across the Anglican Communion. He compared participation in this synod to the United Nations – certain countries may diverge from others on issues like climate change, but they remain in the UN.

“Communion is a common dynamic that Christians follow together as they are in fact changed by God,” Radner said. “Communion then is a path, not a place. It is a road, not a locality. But of course, it’s a road together.”

Nashotah House and The Living Church typically come at these issues from a more traditional perspective, and Wells argued that conservative Episcopalians are “in a perfect place to host a discussion about reconciliation” because of the fact they remain in the Episcopal Church, in contrast with other groups that sought to split from the church over the ordination of women and, more directly, the election of the Rt. Rev. Gene Robinson in 2003 as the church’s first openly gay bishop.

That recent history informs much of the current talk about divisions in the Anglican Communion, though Garwood Anderson, a professor at Nashotah House, told Episcopal News Service between presentations this week that when seeking answers in the church’s historical context, Christians should not forget the church’s origins, in which Jesus’ early followers faced persecution simply for practicing their faith.

“The early Christians didn’t have that luxury (of debating ecclesiological divisions). They were trying to make their way in the world,” said Anderson, who would speak on that topic on the conference’s final day.

Those early Christians may have something to teach today’s church about renewal, now that Christians, particularly in the United States, have become a cultural minority, Anderson said.