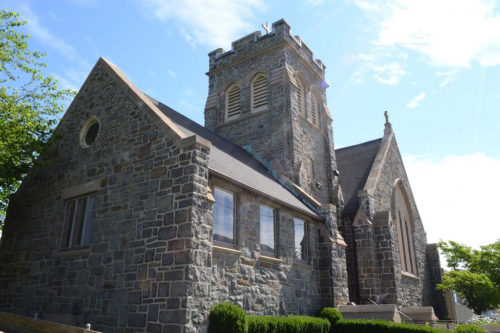 Trinity Church in Cranston, Rhode Island, offered space in its buildings to a Jewish congregation that was in search of a new home. Photo: Trinity Church

[Episcopal News Service] A Jewish congregation that was left without a home after its former Rhode Island synagogue was placed in receivership is being welcomed with open arms by Episcopalians south of Providence.

The new interfaith partnership will be celebrated June 11 when dozens of members of the Congregation Or Chadash will take turns carrying three Torahs from the former Temple Am David in Warwick, Rhode Island, in a procession across the Pawtuxet River to the congregation’s new home at Trinity Church in Cranston.

Or Chadash will be based in a classroom at Trinity that previously was used as a day care center. Trinity is allowing the Jewish congregation to use various other church facilities, including the kitchen and meeting room. And Or Chadash plans to use a small chapel and church hall at Trinity for Shabbat, which won’t overlap with Trinity’s Sunday services.

The Rev. Mitch Lindeman, Trinity’s priest-in-charge, called it a “ministry of facility.” In an interview with the Cranston Herald, he said the response has been uniformly positive.

“From the most senior to the newest members, no one batted an eye,” Lindeman told the Herald, adding that the doors of the church should remain open for the community.

Rhode Island Bishop Nicholas Knisely said his diocese is honored to offer Congregation Or Chadash this hospitality, an example of a wider emphasis on expanding the uses of church facilities.

“We’ve been asking all of our congregations across the state, how do we use our buildings as a resource to empower the whole life of the community and not just as focal point of our Christian worship?” Knisely told Episcopal News Service in a phone interview.

Beth Veltri, president of Or Chadash, which means New Light, told the Herald that hers is a new congregation that is no longer tied financially to the former Temple Am David. The old synagogue was sold to a Buddhist group for Rhode Island’s first Buddhist temple, the Herald reports.

In search of a new facility, Veltri reached out to Warwick Mayor Scott Avedisian, who happened to be a parishioner and senior warden at Trinity. The Episcopal church seemed like a good fit, the mayor told the Herald, and the interfaith partnership was born.

“Our wardens and vestry are excited about this partnering which expresses our commitment to ecumenism and fellowship, while supporting our sisters and brothers in the Jewish faith community,” Trinity says in a post on its website inviting the community to the welcoming procession on June 11.

Knisely is expected to attend the festivities “to welcome this faith community into this new relationship with Trinity Church,” he told ENS. “We look forward to learning together about the riches of God’s love to the world.”

“We do have a tradition within the Episcopal Church of providing hospitality for other faith groups within our buildings,” Knisely said.