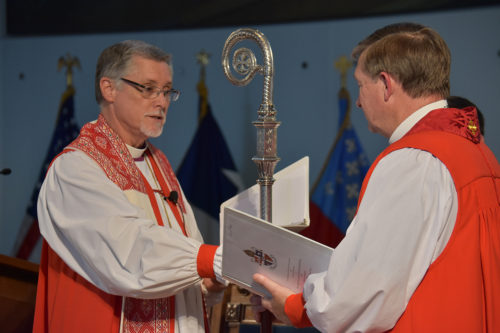 BishopGary R. Lillibridge hands over the diocesan bishop’s crozier to BishopDavid M.Reed. This cozier has been carried by the bishops of the Diocese of West Texas for 98 years. Photo: John Gaskins

[Diocese of West Texas] The Rt. Rev. David M. Reed was invested as the 10th bishop of the Episcopal Diocese of West Texas on June 3, during a service held at TMI – The Episcopal School of Texas in San Antonio. Clergy and lay members of the diocese filled the 500-seat chapel. Reed was first consecrated bishop in 2006 when he was elected to serve as the diocese’s fifth bishop suffragan. Reed is the first bishop suffragan of the diocese to be chosen as diocesan bishop.

On Saturday, the Rt. Rev. Gary R. Lillibridge, ninth bishop of the diocese, who retires this summer, presided over the investiture service for Reed and lead him through the renewal of his ordination vows. During the service, Lillibridge symbolically handed over to Reed the diocesan bishop’s crozier, a crozier that has been carried by bishops of the Diocese of West Texas for 98 years.

During his homily, Reed said he was able to accept all the pageantry around a bishop’s investiture, as long as the diocesan family “doesn’t forget where we’re headed together with Jesus, if we will give ourselves to the work of remembering the life to which we are called by the grace, mercy, and love of God revealed in Jesus Christ. I will go along with this, if you will go along with me … this way, following Jesus … toward the Kingdom.”

Last year, Reed introduced his vision for the diocese: the Kingdom of God, which, he said, is the purpose for which the Diocese of West Texas exists. “Together, we’re going to go this way … the way of Christ.”

On June 3, Reed continued, “I can be audacious enough to take the pastoral staff and serve as a shepherd only because Jesus is our one, true Good Shepherd; and therefore, the whole Church—all of us sheep of his pasture—are called to rise up on our hind hooves and be shepherds of the Kingdom with him.”

Referencing the diocesan annual theme, “Behold, I make all things new,” (Revelation 21:5), Reed said, “This passage is not a call to our churches to shelter in place and await the sweet by-and-by. Our hope and expectation of an end—God’s purposeful completion—frees and empowers us to live, love, and serve more fully in our own places.”

Reed said, “May the Spirit awaken us anew to the liveliness of this kind of life, in which we are empowered to join with Christ in his abundant self-offering.”

Changing up the traditional closing procession, Reed exited the chapel first, along with the other visiting bishops, and he asked the acolytes, vergers, and children to go last, “the place of honor in a parade,” he said.

“Real shepherds don’t stay in the back, but lead and move among the sheep and know them by name. And shepherds are called to lead the Church outside … passionate and open-armed … where Jesus is calling us, into the pain, anger and division of our world,” said Reed.

As the diocese celebrated the Investiture of Reed, many expressions of congratulations and love were received from past parishioners and family friends. Pat Menville, formerly from St. Francis, Victoria, said of Reed and his wife Patti, “Amazing people like you are like ripples in water – and you may never see the shores touched by the ripples, but they have all been shaped by that water.”

The Episcopal Diocese of West Texas comprises 26,000 members in 87 congregations spread across 60 counties in Central and South Texas and covers 69,000 square miles. The diocesan headquarters are at the Bishop Jones Center in San Antonio, Texas.

— Laura Shaver is communications officer for the Diocese of West Texas