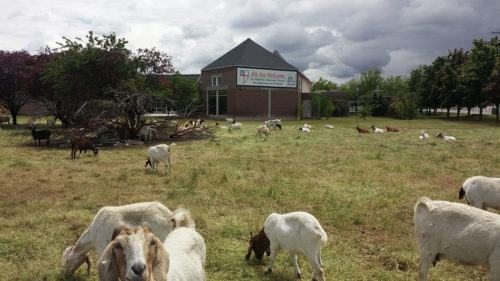 St. Stephen’s Episcopal Church in West Valley City rented a flock of goats to tame an overgrown field of weeds on church property. Within days, the goats had made impressive progress. Photo: The Rev. Mary Janda

[Episcopal News Service] The Rev. Mary Janda has new perspective on Matthew 25:33. If God is to separate the righteous from the cursed like sheep from goats, Janda’s recent experience at St. Stephen’s Episcopal Church in West Valley City, Utah, has gotten her thinking Matthew was a bit unfair to the goats in destining them for eternal punishment.

“I mean, give the goats a break,” said Janda, the vicar at St. Stephen’s.

Janda is not alone in her newfound affection for these biblically maligned animals. She, her congregation and its neighbors spent nine eventful days in May getting to know a flock of 108 goats – give or take a few, due to one death and three births. The goats proved surprisingly useful in taming the church’s field of weeds, when they weren’t escaping and getting into mischief in the neighborhood.

St. Stephen’s, a mission congregation of the Diocese of Utah, chose to rent the flock as a less expensive and more environmentally friendly way of clearing about an acre and a half of vacant church land, Janda said. In the process, the goats became an unexpected tool for evangelism.

“People stopped and took pictures, and we made the evening news,” she said by phone. The goats “just did a fantastic job.”

Churches have long incorporated animals of all kinds into their ministries, from pet-blessing services to farming projects. St. Peter’s Church in Malvern, Pennsylvania, even has maintained a flock of sheep in the church cemetery since 2003. 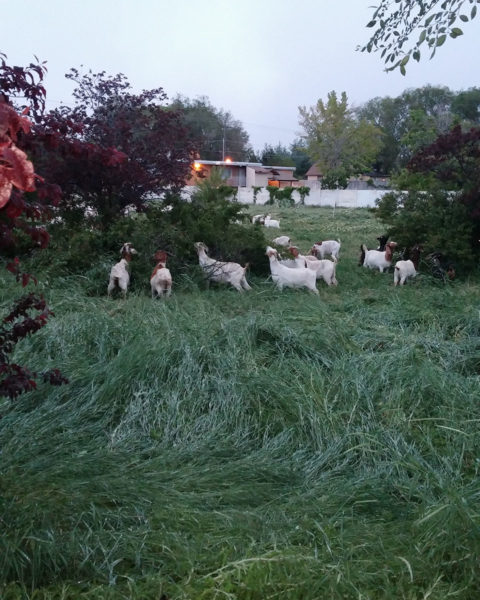 The goats provided by 4 Leaf Ranch had plenty to eat when they arrived at St. Stephen’s Episcopal Church’s overgrown field. Photo: Mary Janda

A flock of goats may not be the best fit for many other congregations, but St. Stephen’s found it uniquely suited to its needs. Years ago, the diocese provided extra land for St. Stephen’s and other churches in Utah with the hope that it would be useful to expanding congregations. Instead, the land in West Valley City has remained vacant – “just a collection of weeds,” Janda said.

This year, when church leaders were discussing the need to hire a contractor or rent equipment to mow the land, someone said it was too bad they didn’t have goats to do the job for them. Someone else mentioned that farms rent goats for jobs like that.

The church took the idea seriously and discovered a flock for hire at 4 Leaf Ranch in Kamas, Utah. The diocese agreed to pay the ranch $1,250 to rent the goats long enough to eat the weeds in St. Stephen’s lot, and Janda said goats munch so close to the roots that their services likely are only needed once a season, rather than hiring someone to mow several times over the summer.

On May 17, the 108 goats arrived by truck and were unloaded at St. Stephen’s. The ranch set up an electric fence around the church lot to keep the flock contained and provided a water trough. One of the ranch’s goat herders was assigned to remain with the flock, sleeping in a small camper that he parked on the property.

The congregation delighted at the visitors, especially when some of them walked up to the church window and stared in at worshipers during Sunday service before returning to their meal of weeds.

The congregation also learned that a lot can happen when you invite a flock of goats over for nine days. In addition to eating virtually nonstop, the goats staged a couple of “breakouts,” in one case getting under a chain-link fence and venturing into a neighboring school yard before they were caught again.

Another time, some of the goats got out and made a snack out of a nearby resident’s flowers. Two joggers stopped to help the goat herder corral the animals back onto church property, and 4-Leaf Ranch covered the cost of the neighbor’s damaged plants.

“All in the life of the goat-herding business,” Janda said.

Life sometimes is mixed with death in this business. One elderly goat died after arriving at St. Stephen’s, a case of old age, Janda said. Two other goats had been pregnant upon arrival and gave birth in the church’s lot, one single birth and one case of twins. The mothers and newborn kids then were taken back to the ranch.

Mostly, though, the goats just ate and ate, paying little attention to the bands of onlookers who gathered now and then at the edge of the lot to watch. 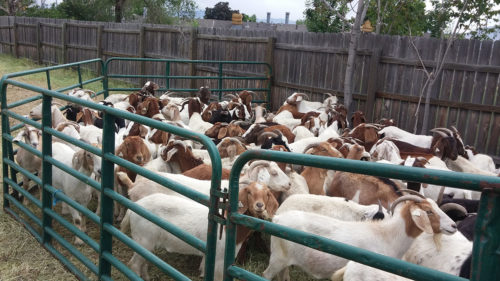 St. Stephen’s is working on a plan to turn part of the vacant lot into a community garden by next year, but the congregation still may need the services of the goats to clear any remaining weed-filled land.

“I just think anything we can do to show how we’re not just your institutionalized church, we’re trying to do things that are environmentally conscious and just have some fun doing it,” Janda said.