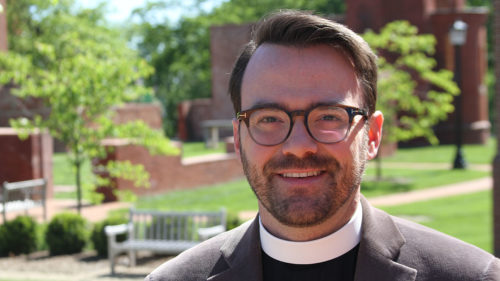 [Virginia Theological Seminary] The trustees of the Virginia Theological Seminary (VTS), at their May 17 board meeting, unanimously approved the appointment of the Rev. E. Ross Kane as the new director of the doctoral programs at VTS. Kane, who currently serves as senior associate rector of St. Paul’s Episcopal Church in Alexandria, Virginia, will join the VTS community on July 1.

“Ross is an exceptional appointment,” said the Very Rev. Ian S. Markham, dean and president of VTS. “He has already proven himself a good colleague, having served as an adjunct for both master’s and doctoral courses here at VTS over the last several years.”

Kane inherits strong doctoral programs from the Rev. David T. Gortner, who has successfully shepherded the programs since 2008. Last year Gortner was appointed associate dean of church and community engagement.

His vocation joins a heart for parish ministry with rigorous scholarship that builds up the church.

Having earned his Ph.D. while serving full-time in the parish, his scholarship and publications explore the lived experience of faith communities, particularly the incorporation of new and unfamiliar expressions of belief and practice into the Christian tradition. Ross also brings an international perspective to his scholarship and priestly vocation, having served in the Anglican Communion in East Africa before entering parish ministry. His publications appear in academic and popular presses alike, such as Christian Century, Journal of Religion in Africa and Anglican Theological Review.

As senior associate rector of St. Paul’s, he crafted innovative adult education offerings and played a leading role in launching and sustaining new efforts to serve Alexandria’s most vulnerable citizens. In recognition of these efforts, Kane was a 2016 honoree in Alexandria’s inaugural 40 Under 40 awards.

“The doctoral programs at VTS have a rich legacy of building up clergy, transforming ministry and training dynamic leaders for tomorrow’s church,” Dr. Kane said. “They offer a rare nexus of scholarship, practical ministry, and prayerful reflection. It is a great privilege to lead these exceptional programs in the years ahead.”

Kane and his wife, Liz Doughty Kane, have two sons, Stephen and Philip.