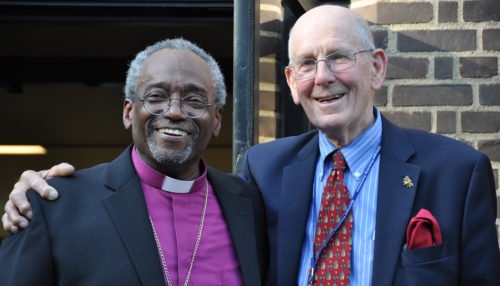 Presiding Bishop Michael Curry is the honorary chairman of the Episcopal Preaching Foundation, which A. Gary Shilling started 30 years ago to improve preaching in the Episcopal Church. Photo: Mary Frances Schjonberg/Episcopal News Service

[Episcopal News Service – Richmond, Virginia] A. Gary Shilling likes to joke that he began the Episcopal Preaching Foundation after he realized he was reading the back pages of the Book of Common Prayer or even balancing his checkbook during a sermon.

That was more than 30 years ago and Shilling decided to do something about it.

Having already founded an investment advisory firm in Springfield, New Jersey, Shilling created, and largely funded, the Episcopal Preaching Foundation. By this year, close to 5,000 Episcopal Church preachers will have been strengthened by the foundation’s work. On May 30, foundation supporters gathered to celebrate that achievement and its instigator.

Presiding Bishop Michael Curry preached during Eucharist at All Saints Episcopal Church in suburban Richmond, Virginia. He later joined in the tributes during dinner at the nearby Diocese of Virginia’s Roslyn Retreat Center. The celebration took place during the foundation’s May 28-June 2 Preaching Excellence Program for seminarians and recent graduates, who attended the celebration.

From the beginning, Shilling said, he was convinced that excellent preaching is key to engaging all Episcopalians, especially those for whom a sermon during worship is their main point of contact, with the Church. Good preachers, he reasoned, were rewarded, so he decided to connect with preachers who were early in their lives in the pulpit. The foundation’s mission is based on the premise that strong and vibrant preaching will attract congregants and grow the Episcopal Church.

During his sermon and in his dinner remarks, Curry, a 1991 Preaching Excellence Program alum, praised Shilling’s instincts. He also argued that preaching in today’s world was not just about growing a church but, rather, growing hope in a weary and troubled world that has a skewed idea of Christianity.

Christians often look like anything but the compassionate, life-giving and liberating Jesus of the Bible, he said.

“We need some witnesses to a way of being Christian that actually looks something like Jesus of Nazareth,” Curry said. “The Jesus of Nazareth who said, ‘the spirit of the Lord is upon me because he has anointed me to preach good news to the poor’” and who preached compassion and love, even for one’s enemies.

“My brothers and sisters who would preach the word, we need you in your preaching to point us to that Jesus and then for all of us to go out into this world as the Jesus Movement to bear witness to him,” Curry said to an applauding congregation. “That is a church that matters and that is a church that will have a future.” 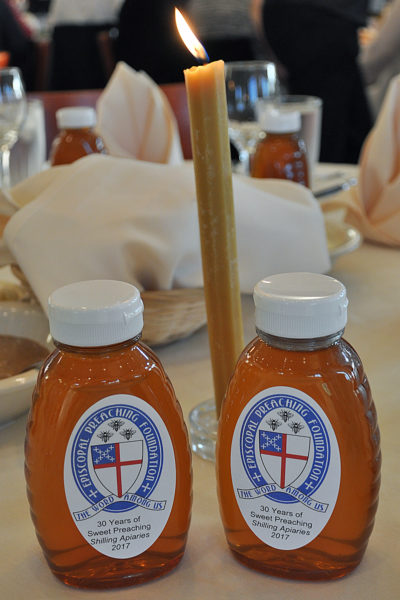 Episcopal Preaching Foundation founder A. Gary Shilling may be an economist, financial analyst and commentator, but his avocation is beekeeping. His bees produced the wax that he used to make the candles that lit the dinner tables during the May 30 celebration of the foundation’s 30th anniversary. Each dinner attendee received a bottle of Shilling Apiaries honey commemorating “30 years of sweet preaching.” Photo: Mary Frances Schjonberg/Episcopal News Service

Later at the dinner, the presiding bishop spoke directly to Shilling, calling him “wise, gentle and courageous.”

Curry, who recently agreed to serve as the foundation’s honorary chair, compared Shilling to Mary. Shilling said yes to “the calling of the Holy Spirit,” he said.

“Yes, so that we would raise up new generations of preachers; yes, so that they would be trained and equipped,” the presiding bishop continued, adding that Shilling’s “yes” has also supported seminaries in their effort to train preachers and supported new graduates who are sent out to preach good news.

The Very Rev. Andrew McGowan, dean and president of Berkeley Divinity School, praised Shilling for epitomizing the ministry of the laity, as described in the back pages of the Book of Common Prayer (on page 855, specifically). The catechism says that ministry is to “represent Christ and his Church; to bear witness to him wherever they may be; and, according to the gifts given them, to carry on Christ’s work of reconciliation in the world; and to take their place in the life, worship, and governance of the Church.”

Shilling, who attends Christ Church in Short Hills, New Jersey, has also served at the local, diocesan and churchwide level.

An economist by training and vocation, Shilling told the dinner guests that the success of the foundation rested on “an uptrend” in interest in preaching, and on a “lot of luck.”

He said he decided early on that the organization should not work with experienced preachers who were already being recognized for their work but with new preachers as they embarked on their careers and as they grew into their ministry.

Preaching, Virginia Bishop Shannon S. Johnston said during a press conference earlier in the day, good preaching is “absolutely critical” to a faith community. “There is no better organization to send people to who want to study the craft and the art and the faithfulness of a good sermon,” he said of the preaching foundation and its programs.

The foundation’s centerpiece is its annual Preaching Excellence Program, which offers seminarians and recent graduates an immersion experience in the art and practice of preaching. PEP gathers seminarians, homiletics professors and rectors for a week of lectures, worship, workshops and small groups in which the students preach sermons for discussion and feedback.

The tuition-free program began in 1988. More than 1,500 Episcopal clergy have participated in the program. Participants are nominated by their seminaries. 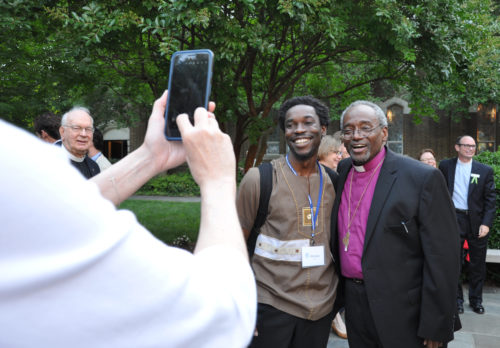 Wesley Morris, a seminarian from the Diocese of North Carolina who attends Union Seminary in New York, gets a snapshot with Presiding Bishop Michael Curry after a May 30 Eucharist at All Saints Episcopal Church in suburban Richmond, Virginia, commemorating the 30th anniversary of the Episcopal Preaching Foundation. Morris is one of 39 current and just-graduated seminarians attending the foundation’s annual Preaching Excellence Program May 28-June 2 at the nearby Roslyn Conference Center. Photo: Mary Frances Schjonberg/Episcopal News Service

Beginning in 2014, thanks to a generous grant from the Robertson Foundation, “PEP II” has gathered recently ordained priests for a similar experience. This year’s session runs June 13-16 at Drew University, in Madison, New Jersey.

Since 2012, the foundation has also helped thousands of priests, deacons and lay preachers improve their skills through other conferences at the diocesan, national and international level.

This year the Episcopal Preaching Foundation partnered with the John Templeton Foundation to integrate studies on forgiveness into the practice of preaching. Forgiveness will be the focus at the Preaching Excellence Program and PEP II.

Everett Worthington, a professor of psychology at Virginia Commonwealth University and a clinical psychologist, will lead preachers through his work on forgiveness. He told Episcopal News Service that he plans to discuss how preachers and pastors can incorporate “forgiveness education” into their preaching and into the lives of their congregations.