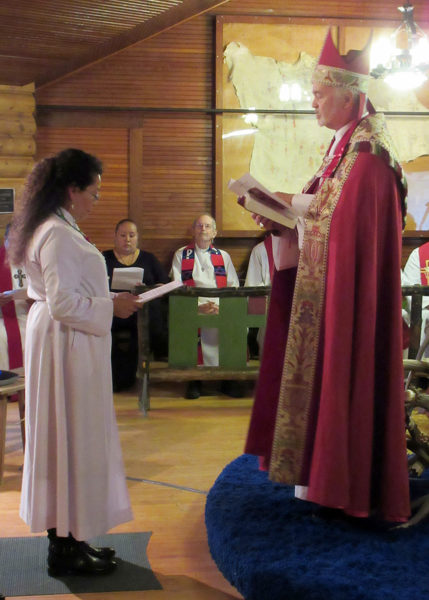 The Rev. Roxanne Jimerson-Friday became the first Native American woman from the Wind River Indian Reservation, in the state of Wyoming, ordained to the priesthood of the Episcopal Church on May 26 by Bishop of Wyoming John S. Smylie. Photo: Diocese of Wyoming

Jimerson-Friday is part of the Seneca Nation of New York, on her father’s side, and part of the Shoshone Tribe of Wyoming, on her mother’s side. She was born in Lander, grew up in New York until she was 10, and then moved back to Wyoming. She currently lives in Ethete with her husband, Aaron Friday.

Her interest in becoming ordained started when she realized she had always been the person that people turn to when they are in need. More recently, she witnessed a miracle when her grandson almost died. She and her family were told he wouldn’t make it, but through the power of prayer, God healed her grandson. Because of that experience, along with a life of living in relationship with God, she made a promise to God that she would serve Him and bring people to Him. She says, “I made that promise with my whole heart and then everything seemed to fall into place like a path was made just for me.”

Jimerson-Friday has been thinking about her goals. “I am really in God’s hands. Wherever He is leading me, that is the path I am taking. When I look into the future I feel that I am going to bring peace and a sense of healing.”

When asked how she felt about her accomplishment, she said she is very proud. “It’s a matter of uplifting all the Native American women, that you can do whatever you want to do.”