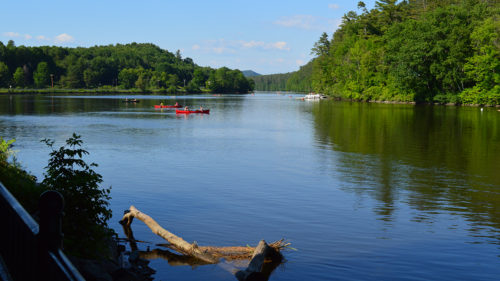 The Connecticut River is a popular place for paddling by canoe and kayak. Starting May 31, it also will become a place of prayer through the River of Life pilgrimage organized by the Episcopal dioceses of New England. Photo courtesy of Kairos Earth

[Episcopal News Service] New Hampshire Bishop Robert Hirschfeld has rowed on the Connecticut River for years. It once was a sort of industrial “sewer” but has since been cleaned up and restored to “a place of stunning beauty,” he said. Hirschfeld intends to show it also can be a place of worship and an inspiration for prayer.

The bishop is preparing to lead a 40-day pilgrimage on the river, from source to ocean. In our sound-bite culture, Hirschfeld’s message can be reduced to this: Put down that cellphone, and pick up a paddle.

“This is a way to experience God’s love for us, God’s grace, God’s desire to flow in us and around us,” Hirschfeld told Episcopal News Service in a phone interview. “And in our forming a community of pilgrims, my desire was to slow down and put aside our electronic devices, all the busy-ness of our life, and just be fully present with God and each other in the midst of God’s creation.”

The River of Life pilgrimage, which launches May 31 near the Canadian border, is a collaboration of all Episcopal dioceses in New England, as well as the New England synod of the Evangelical Lutheran Church in America and several conservation groups. More than 50 people signed up in advance to canoe or kayak multi-day segments, camping overnight, and others are invited to join the group for day paddles. Daily segments average 10 to 12 miles.

Pilgrims without a paddle or who live far from the Connecticut River still are encouraged to participate in the pilgrimage by following along as a “pilgrim in prayer” with the River of Life prayer book.

The Connecticut River is New England’s longest river, passing through New Hampshire, Vermont, Massachusetts and Connecticut before emptying into Long Island Sound. Paddling the length of the river isn’t unusual, and a speedy paddler could cover its 410 miles in about a week. But Hirschfeld sees this as a unique faith-based journey, offering a slower, more contemplative experience.

The choice of 40 days was intentional – think Noah’s 40 days and nights of rain, or Jesus in the desert. Organizers also wanted to challenge the notion that Christian pilgrimages must lead to traditional destinations, like the Holy Land.

“Why is it that we’ve never considered doing such things at home in our own sacred landscape, the places we actually live?” asked the Rev. Stephen Blackmer of Church of the Woods in Canterbury, New Hampshire. He has worked closely with Hirschfeld and Jo Brooks, their logistical coordinator, in planning the River of Life pilgrimage.

“Part of the joy for me of exploring this is to say we can have similar experiences … right here,” Blackmer said. “And in that, we both bring ourselves closer to God and we restore our connections with the very places we live.”

Blackmer, who began canoeing as a child, said he had about 30 years of experience in environmental advocacy before being called to the priesthood a few years ago, around the same time Hirschfeld was being considered for bishop of the Diocese of New Hampshire.

In 2011, Hirschfeld was serving as rector at Grace Episcopal Church in Amherst, Massachusetts, when he got a letter inviting him to interview for New Hampshire bishop. A veteran of rowing teams in high school and college, Hirschfeld needed to reflect on that invitation, so he got out his one-man sculling boat and headed down to the Connecticut River.

Rowing upstream, the idea came to him of a Christian pilgrimage on the river that would incorporate references to its natural history, human history and cultural history.

For several years, that idea remained just an idea. He was elected bishop coadjutor in 2012 and took the reins of the diocese the following January. Then, in 2015, while attending an annual Advent retreat with all the bishops from Province I, he remembered the river pilgrimage and mentioned the idea to the other bishops.

“They immediately got excited about it,” Hirschfeld told ENS. “It was like lightning had struck. … Even those not interested in kayaking or canoeing, they just saw a value to this as a way of doing public liturgy, as a way of bearing witness to the health of water.”

Blackmer, one of the first new priests Hirschfeld ordained in New Hampshire, has been at the forefront of the diocese’s environmental ministries, including through weekly outdoor worship services at Church of the Woods, on 106 acres of woods and wetlands in Canterbury.

“When people ask me what they can do for the environment, the first thing I say is, go outside,” Blackmer said.

That, too, is a guiding principle of the River of Life pilgrimage. Hirschfeld and Blackmer expect eight pilgrims to make the journey to the headwaters pond of the Connecticut River, at the northern tip of New Hampshire. The first three days will be spent hiking from pond to pond in that region, until the nascent river becomes navigable. Then they will start paddling south in three canoes.

“The number of pilgrims will grow and swell just as the river does as it travels downstream over the next four weeks,” Blackmer said. Hirschfeld and Blackmer will miss certain segments of the trip, due to their individual schedules, but each plans to paddle more than half the distance. Two guides are the only paddlers expected to be on the river all 40 days.

For the northern half of the trip, most of the overnight stays will be at campsites chosen along the river. On the southern half, where outdoor campsites are harder to come by, most nights will be spent camping in churches. A support vehicle will follow by land with food and other supplies as needed.

Each day, prayers will be read from the pilgrimage’s prayer book, but “the large part of each day will be in silence, to reflect that part of it is simply being there,” Blackmer said.

They also have scheduled stops along the journey where community events will be held, typically on weekends. A list of events and day paddles is available on the pilgrimage website.

And by the time the journey reaches Essex, Connecticut, on July 8 for a concluding celebration, “who knows, we may have a flotilla of canoes and kayaks,” Blackmer said. The pilgrimage officially ends the next day, July 9, with a final six-mile paddle to Long Island Sound.

After that, any river in American could be ripe for the next pilgrimage, if another diocese wants to pick up the New England dioceses’ trailblazing oar.

“We’re taking extensive notes as we go through this,” Hirschfeld said. “It would be wonderful if other dioceses and other spiritual organizations could replicate this.”