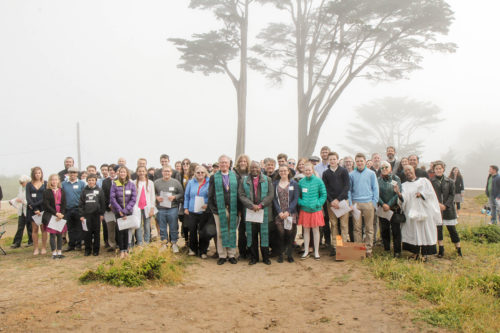 California Bishop Marc Andrus, Presiding Bishop Michael Curry and the Rev. Stephanie Spellers, far right, canon to the presiding bishop for evangelism, reconciliation and creation care, pose with confirmands during an EcoConfirmation service at the Presidio of San Francisco on May 20. Photo: Lynette Wilson/Episcopal News Service

[Episcopal News Service – San Francisco, California] “The work of saving God’s creation is nothing less than the work of God.” Presiding Bishop Michael Curry spoke these words during a May 19 sermon framing creation care in terms of the Jesus Movement here at Grace Cathedral.

“This is God’s world,” he said, encouraging those present to affirm and to encourage one another in the care of God’s creation.

“I am convinced that God came among us in Jesus to show us the way to not just become the human family, but the family of God. And that’s why we’re here because the environment, no, the creation, is part of the family of God … God’s family is the entire created world and universe.”

The Episcopal Church has witnessed the presiding bishop’s thoughts on the Jesus Movement unfold in his dynamic preaching and speaking since he took office in November 2015. His May 19 sermon, put creation care and environmental justice squarely in that context. 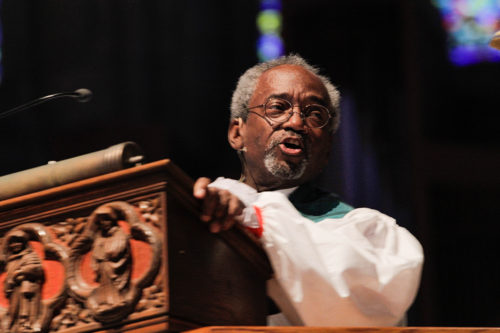 The presiding bishop preached to an interfaith congregation in a packed cathedral as part of a larger eco-justice conversation on safeguarding climate, food and water hosted by the Diocese of California May 18-20. On May 18, the cathedral held a benefit conference for the St. Barnabas Center for Agriculture, an Episcopal college in northern Haiti, and two Bay Area environmental groups. A May 19 panel discussion explored climate change’s effects on agriculture and food security. Lastly, on the morning of May 20, Curry presided at an EcoConfirmation service.

The conversation came at a time when the Trump administration has sought to gut environmental regulations aimed at curbing greenhouse gas emissions and protecting air and water resources. The administration also is reviewing public lands and national monuments, considering opening them to oil and gas drilling, and has promised to revive the coal mining industry.

The Episcopal Church’s 78th General Convention prioritized evangelism, reconciliation and creation care; to address the latter it created an Advisory Council for the Care of the Stewardship of Creation and authorized the creation of liturgical resources for honoring God in creation.

The eco-justice conversation sought to further engage Episcopalians in environmental issues, including water- and food-security, and environmental justice, particularly following on the Episcopal Church’s solidarity with the Standing Rock Sioux Nation in its opposition to the North Dakota Access Pipeline’s route through tribal lands and beneath the Missouri River at Lake Oahe. A reservoir, Lake Oahe provides water to the Standing Rock reservation and others downstream. Indigenous nations across the United States and worldwide came together in an unprecedented show of solidarity with the Standing Rock Sioux, and along with climate activists, environmentalists and others, including many Episcopalians, in its challenge to the pipeline. Leaks have been detected along a feeder line and the main pipeline, which is scheduled to begin full operation June 1.

The Episcopal Church, through its Washington, D.C.-based Office of Government Relations and the Episcopal Public Policy Network, using Church policy as a guide, advocates for the care of creation at the local, national and international level. 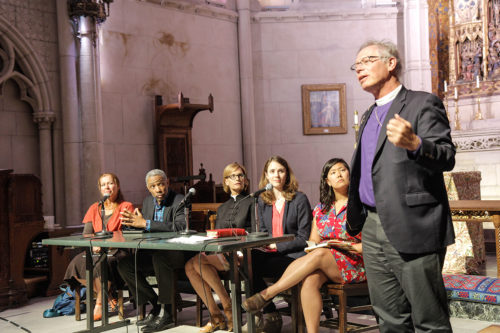 “Policy and faith, it doesn’t seem like it’s a natural correlation at first. I find that as I work with members of the Episcopal Church and visit different dioceses and parishes I get questioned a lot, people will say ‘we have these incredible ministries at our church, we [our building] is energy efficient … why do we need to advocate on top of that, why do we need to get political,’” said Jayce Hafner, the Church’s domestic policy analyst during the May 19 panel discussion.

“I would say that there’s a difference between getting political and policy advocacy. Policy advocacy allows us to close the loop between the impactful programmatic work that we are doing to make sure that it reaches the halls of power. Because when you look at injustice in our country, especially in the environmental realm, policy is an incredible tool for promoting systematic injustice or spreading justice for our people and our planet.”

Curry framed it this way in his sermon: Humanity’s hope and salvation lies in a vision of God’s world that is not a nightmare. And he called on those present at the cathedral and the Episcopal Church to praise God not just in their worship but by safeguarding the water and the air. 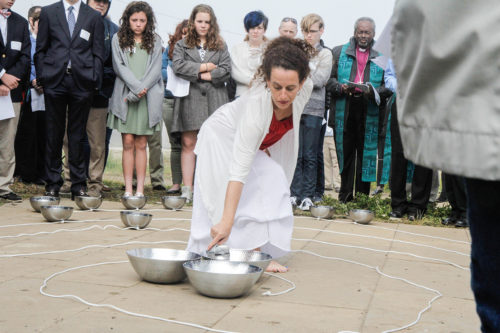 The EcoConfirmation included a “Cosmic Walk,” a meditation on the history of creation beginning with the Big Bang 14 billion years ago and the formation of the Earth’s atmosphere, through the emergence of homo sapiens, the writing of the Bible and Jesus’s birth to the discovery of gold in California in 1848 and oil becoming a major industry in the state in the early 20th century to 1969, when humans first viewed the Earth from space. Alisa Rasera served as the cosmic walker. Photo: Lynette Wilson/Episcopal News Service

The following day, some 40 confirmands affirmed their Christian beliefs as full members of the Episcopal Church. The confirmands – many of them students at the Cathedral School for Boys – gathered with other Episcopalians among the cedar, cypress and eucalyptus trees at the Presidio’s Golden Gate Overlook. A dense fog made invisible the Golden Gate Bridge and fog horns sounded in the distance.

It was the fourth EcoConfirmation in the Diocese of California, set apart from a tradition confirmation by three additional words added to the Baptismal Covenant’s fifth and final question: “Will you strive for justice and peace among all people and respect the dignity of the Earth and every human being?”

“As [California] Bishop Marc [Andrus] pointed out, there really is only one short change to the liturgy in the BCP [Book of Common Prayer], it emphasizes that we are in communion with all of God’s creation and in addition to the things we normally promise ourselves to,” said the Rev. Melanie Mullen, the Episcopal Church’s director of reconciliation, justice and creation care, in an interview with ENS during the EcoConfirmation.

“Overall, the work of the Jesus Movement includes creation care,” she said. By developing liturgical resources for honoring God in creation “we are learning how to pray the words of all of God’s creation into what we’re doing.”

It helps, said Mullen, to take the service outside.

It was Curry’s first outdoor confirmation, and it was “wonderful,” he said. “In the beginning of creation, it’s the spirit of God that broods over the chaos and brings order and creation, and to do confirmation out here in the wilderness, celebrating and giving God thanks for creation … confirmation is calling forth that same spirit that called forth the creation to call forth new life in those who are confirmed so that the risen Christ lives anew even in us. That’s awesome!” 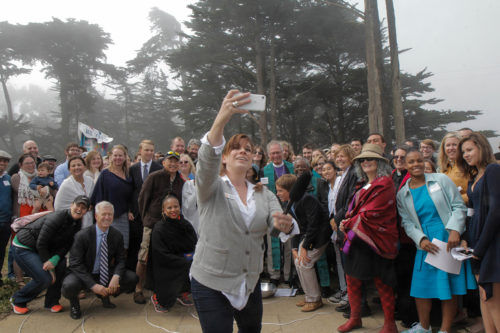 The Presidio of San Francisco, a former U.S. military fort, is part of the National Park Service. The site, at the northern tip of the San Francisco Peninsula, was chosen for the view (on a clear day) of the Golden Gate Bridge and the Pacific Ocean. It was also chosen because it’s “an example of man carving into nature in preparation for a war that never came, and then nature reclaiming the land,” said Caren Miles, the diocese’s associate for faith formation, who planned the service.

The Diocese of California and Andrus have long been involved climate change and environmental justice advocacy; Andrus has represented the presiding bishop at the United Nations climate negotiations, both in Paris, France, and Marrakesh, Morocco, and at the signing of the Paris Agreement. 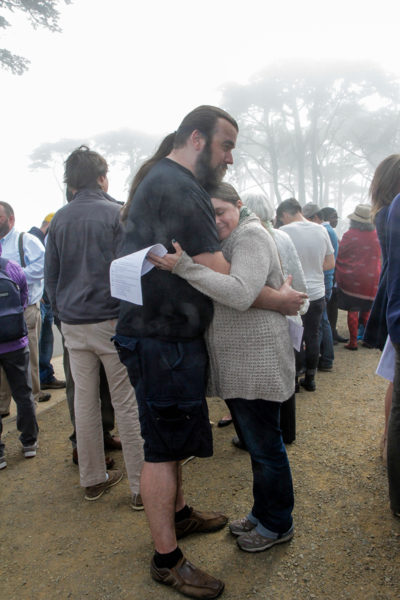 During the EcoConfirmation service, California Bishop Marc Andrus asked the people present to contemplate wonder and the natural world.

“Wonder can guide us into deeper relatedness with nature, it is God’s gift from the beginning of the universe to help us become connected to each other, to the world and to God,” said Andrus, before inviting the congregation to contemplate a moment of wonder, what they experienced and how the moment changed them.

For Gordon Gilmore, his moment of wonder was when he first came to California. He was driving along Highway 37 and saw the sun setting on the pickleweed marshes. The road traces a crescent along the north shore of around San Pablo Bay north of San Francisco and through a national wildlife refuge created more than 40 years ago to protect migratory birds and wetland habitat.

Gilmore’s wife, Trillian Gilmore, also chose the sunset as her moment of wonder. For her, it was driving west through the Sierra Nevada mountain range and watching the sun set multiple times over 45 minutes as she rounded the mountain’s peaks.

“It was beautiful,” she said.