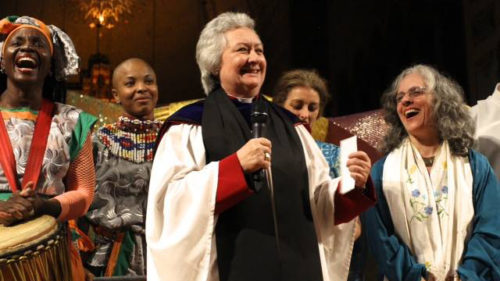 [Episcopal News Service] The Rev. Gwynne Guibord is trained as a clinical psychologist, and for much of her adult life she expected to continue in private practice until retirement. But God had other plans for her.

She began feeling a call to the priesthood after a series of midlife events prompted a stretch of soul-searching, especially the death in 1992 of her sister from leukemia at age 37.

“One morning I got up, and I remember saying out loud, ‘All my life I’ve told you I love you’ – referring to God – ‘and if you’re asking me to do this one thing, then I had best show up and do the work.’ And within a month I was in seminary.” 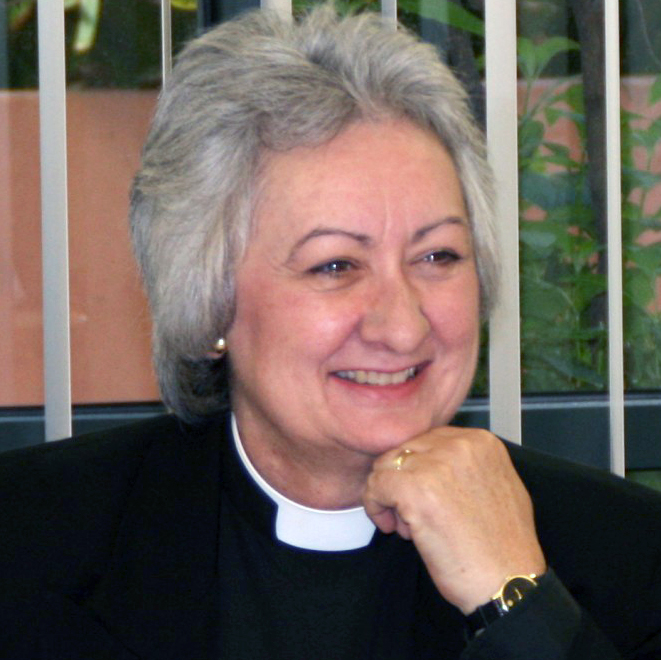 Age: 72
Where: Los Angeles, California
Who: Founder and president of The Guibord Center, a nonprofit organization dedicated to interfaith education and dialogue.
Professional background: Guibord worked as a clinical psychologist before following a calling to religious ministry. She attended Claremont School of Theology in Claremont, California, and was ordained as an Episcopal priest in 2005.

Now Guibord, after being ordained as a priest in 2003 and serving in Episcopal Diocese of Los Angeles, is the head of the Guibord Center, an independent nonprofit organization she founded in 2011 to promote interfaith education and dialogue through a wide range of events and resources. She spoke to Episcopal News Service recently by phone.

What was your religious upbringing, and were you exposed to many different religions at a young age?

It’s kind of an interesting background. My father was French Canadian, although born in the state of Michigan. He was reared as a Roman Catholic, and my mother was from the South and she was reared as a Southern Baptist. My sisters and I were reared in the United Methodist Church. My father always felt drawn to Judaism. He converted to Judaism as a Reform Jew, was very devout in his belief and practice of Judaism. And I really observed my parents negotiating that. My mother would go to synagogue services every Friday night. They would celebrate the High Holy Days together, and they did that will a lot of grace. And I think it’s because of that that I started feeling very drawn to learning about other religions and faiths.

Did you feel a calling at some point to pursue that kind of interfaith work more deliberately?

Well, I have never ever felt called to parish ministry, although I serve at St. John’s Cathedral in Los Angeles. My calling has always been to work in the ecumenical, as well as interfaith endeavors. And now it’s completely interfaith.

It can be tough enough to find common ground across the Anglican Communion and within the Episcopal Church. Why is it important to you to also seek common ground with all world religions?

When you look at what’s happening in the world today, it would appear that many hotspots in the world come from a religious ideology that kind of has the attitude of, “My God is bigger than your God and therefore better than your God.” And I really believe that unless we completely understand one another, or as much as we possibly can about our various religions and faiths, we’re going have a very, very hard time with finding peace amongst us with any integrity at all. I have found that we have far more in common than not. We are distinct in our differences and we should remain distinct in our differences. However, there is far more in common. All religions or faiths know the whole notion about compassion, about our humanity, about leading with integrity based on our religious or faith beliefs, about treating one another with kindness. And if we were to emphasis that, I think the world would be in a much, much better place than it is right now.

There are strains of extremism in each of the three religious that make up the Abrahamic family – Christianity, Judaism and Islam. Do strict interpretations of those faiths make it difficult for interfaith dialogue to happen?

Every human being carries within them a filter, and that filter is how that individual sees the world. On that filter are things like a person’s age, their economic status, their political beliefs, their social standing in their community, their gender, their sexual orientation, level of education, the kind of family that they came from. And that impacts how people view or interpret religious texts. It’s going to be interpreted in different ways, some ultra-conservative and others ultra-liberal based on where they’ve come from and what they’ve come from.

Does that make it more difficult to break through some of those barriers?

I don’t know that people have that understanding of the filter that they carry, I don’t know that all people have heard it that way. And if they were to hear it that way they may be able to think a little bit differently about what they are reading in whatever their sacred text is. We tend to think that there is an absolute truth. There isn’t. There are many truths in the world.

You served from 2003 through 2009 as officer of ecumenical and interreligious concerns for the Episcopal Diocese of Los Angeles. Is there anything about Southern California that offers unique opportunities for this kind of work?

We’re on the Pacific Rim and therefore I would guess that we have more of the Buddhisms – there’s just not one Buddhism; it’s very much like Christianity – so I think that we have access to some religions that may not be as readily accessible in other parts of the United States. I’ve heard from people that they don’t have a Hindu community nearby or they don’t have a Buddhist community nearby.

More recently, your experiences with cancer have informed your work, including the panel discussion you hosted in February, “Beyond the Veil: Life After Death.” Has your focus been more on what faith teaches us about the process of dying or on what might await us in the afterlife?

It was both. The panelists spoke both about the process of death as well as various beliefs about what happens on the other side of death. And I doubt I would have done that panel had I not been diagnosed with my own cancer eight years ago – I am not terminal, I’m doing well, but I doubt that panel would have happened. There was a huge turnout. People were fascinated by it, and it’s a topic we tend to not want to talk about or deal with because all of us, no matter what that filter is that I referred to, will face that at some point in our lives.