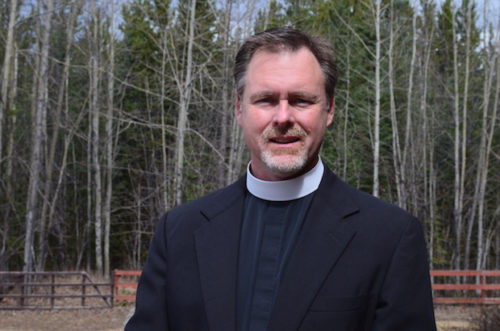 The Rev. Jake Worley, elected bishop of Caledonia April 22, will not be consecrated after a decision by the provincial house of bishops that he holds “views contrary to the Discipline of the Anglican Church of Canada.” Photo: Anglican Journal

[Anglican Journal] The Rev. Jake Worley, elected bishop of the Diocese of Caledonia April 22, will not be consecrated, after a ruling by the House of Bishops of the ecclesiastical province of British Columbia and Yukon.

“As the Provincial House has registered its objection, the Rev. Worley will not be consecrated bishop in the Diocese of Caledonia in the Anglican Church of Canada,” reads a statement released May 15 by the national office of the Anglican Church of Canada. The statement specifies that, according to the canons of the province, the decision is final. The diocese will now proceed to hold another synod to elect another bishop, it adds.

Last month’s election was held to find a successor for Bishop William Anderson, who announced in late 2015 his plans to retire.

The house’s decision has to do with Worley’s views on his involvement with the Anglican Mission in America (AMiA), a collection of theologically conservative churches that was originally a mission of the Anglican Province of Rwanda.

In 2007, Worley, who was born and raised in the U.S., planted a church in Las Cruces, New Mexico, as a missionary for the Anglican Province of Rwanda. (At some point after Worley left, that church joined the Anglican Church in North America, another grouping of conservative Anglican churches.)

“After many open and prayerful conversations, the majority of the House concluded that within the past five years the Rev. Worley has held—and continues to hold—views contrary to the Discipline of the Anglican Church of Canada,” Archbishop John Privett, metropolitan of the province, is quoted as saying.

According to the canons of the diocese, the House of Bishops can object to the election of a bishop if “he or she teaches or holds or has within five years previously taught or held anything contrary to the Doctrine or Discipline of the Anglican Church of Canada.”

The bishops made their decision, according to the statement, after they “reviewed the Rev. Worley’s past actions, what he has written directly to the House, and what he said when meeting with the Provincial House of Bishops.”

The bishops, the statement says, met several times after Worley’s election last month, to “review the materials before them” and meet with Worley.

The statement concludes with a request by the House of Bishops for prayers, “especially for the Worley family, for the Diocese of Caledonia and all those who worship and minister there.”

Neither Privett nor Worley was immediately available for comment as of press time.