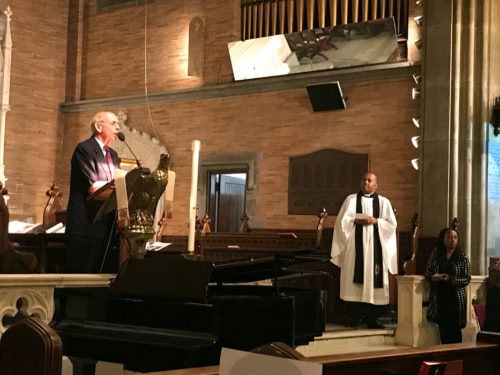 [Episcopal News Service] Supreme Court Justice Stephen Breyer made an appeal for the importance of courts and the rule of law at an event honoring the late Thurgood Marshall. Breyer spoke on May 13 at St. Philip’s Church in New York, addressing a crowd of several hundred on the occasion of the 10th annual Thurgood Marshall Law Day, which honors the former Supreme Court justice who once served on the Harlem church’s vestry.

Marshall, the first African-American to serve on the Supreme Court, lived in New York while serving as an attorney for the NAACP, and joined the historically black St. Philip’s in 1938. The Episcopal feast day honoring his life and work, May 17, is the day he won his most famous Supreme Court argument, Brown v. Board of Education.

The program began at 4 p.m. with an Evensong service with readings from Amos and 1 Corinthians. The Rev. Patrick Williams, St. Philip’s interim pastor, was the celebrant and the Bishop of New York Andrew M.L. Dietsche, offered a blessing to kick off the speaking program.

Breyer paid heartfelt tribute to Marshall, who retired from the high court in 1991 and died at age 84 in 1993.

Clutching a biography of Marshall stuffed with leaves of paper scrawled with handwritten notes, Breyer discussed the legacy of Brown v. Board of Education, the 1954 case in which the court found that state laws establishing separate schools for black and white students were unconstitutional.

Marshall, arguing before the court in that case, “didn’t discover some part of the law that everybody didn’t know full well, it’s here it’s in this constitution,” said Breyer.

Breyer went on to describe a recent visit he’d received from the chief justice of Ghana, who was curious about the power of law in American democracy and asked Breyer “why do people do what you say?”

Breyer said that the 1954 case Brown v. Board of Education was the “most important” Supreme Court ruling, but that Cooper v. Aaron, a follow-up case that also dealt with school integration, was his “favorite.” The court’s ruling in Cooper held that states had to follow the orders of the Supreme Court and desegregate schools, even if they disagreed.

Breyer pointed out that the Cooper decision was signed by all nine justices, which he pointed out was “unusual.”

The consensus that the judiciary must be respected, even when its rulings are disagreeable or outright wrong, is vital to society, Breyer argued.

As an example, he brought up Bush v. Gore, the 2000 ruling that halted a recount in the presidential election and effectively allowed George W. Bush to assume the presidency.

“I dissented very strongly, I thought it was wrong,” Breyer said of the decision. “But people didn’t have riots or kill each other in the streets.”

“Before you reach that conclusion, turn on the television set and see what happens in the countries that try to settle things that way,” Breyer said.

Following the talk, attendees gathered in the undercroft for a reception.

“Today was a historic event, so we were very proud,” said parishioner Mark G. Barksdale, who works for the city of Newark as director of the Department of Economic and Housing Development. “It was a great honor for the church and the diocese.”

“We were running around in the undercroft with the other kids, while the adults were doing what we’re doing now,” said Brown, laughing.

Senior Warden Charles Williams III said that it was important for the church to host speakers from outside the Episcopal community, such as Breyer, who is Jewish.

“The church is supposed to spread its word and bring the outside in,” said Williams. “We’ve always had the idea to bring, quote, ‘non-religious’ people in because we are part of the community and the community is part of us. And you never know, some people may hear something that they connect with.”

St. Philip’s does have a connection with Breyer, as his daughter Rev. Chloe Breyer is an associate priest for the congregation.

Williams pointed out that “it’s not often you get a Supreme Court Justice, especially in a church,” noting that even Marshall intentionally became less involved in church life after taking his place on the high court, to avoid any potential sense of bias.

John W. Watkins, an attorney with the Brooklyn District Attorney’s office, helped plan the event, which drew a large student contingent from the John Jay College of Criminal Justice.

“The message the justice gave was really on point,” Watkins said after the event. “He really helped redirect my feelings about the current state of things from rage to reason.”

– Keith Griffith is a New York-based freelance journalist. He is a member of St. Mary’s Episcopal Church in Harlem.