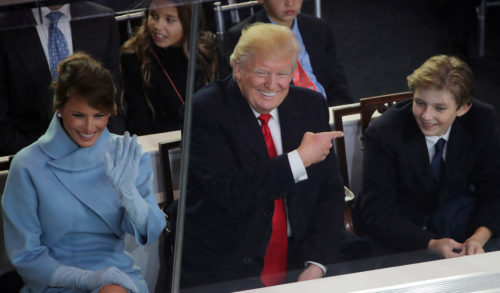 Barron Trump, 11, will move to Washington, D.C., from New York with his mother, first lady Melania Trump, at some point after he finishes the current school year at Columbia Grammar and Preparatory School on Manhattan’s Upper West Side. He is believed to be in fifth grade.

St. Andrew’s Head of School Robert Kosasky and Rodney Glasgow, head of the middle school and chief diversity officer, wrote a letter to St. Andrew’s families confirming that the young Trump will become a member of the Class of 2024, CNN reported.

The Washington Post reported that the White House wanted to announce the news in the summer after St. Andrew’s ended the academic year, in part out of concern that the school might become that site of protest. However, parents started to ask questions when rumors began to circulate and the school decided to confirm Barron Trump’s enrollment. CNN reported that the school had the Trump family’s permission to do so.

Melania Trump said in a statement after the announcement that the family is “very excited” to have Barron Trump attend a school that she said is “known for its diverse community and commitment to academic excellence.” She said the school’s mission “to know and inspire each child in an inclusive community dedicated to exceptional teaching, learning and service” appealed to the family.

Donald Trump was raised Presbyterian. Barron Trump was baptized in December 2006 at the Episcopal Church of Bethesda-by-the-Sea in Palm Beach, Florida, the same church where his parents married on Jan. 22, 2005.

The school has the Center for Transformative Teaching and Learning, which says its priority is to “ensure that 100 percent of St. Andrew’s pre-school through 12th grade teachers receive training and ongoing professional development (every school year) in mind, brain, and education science, the most innovative thinking being applied to enhancing teacher quality and student achievement today.”