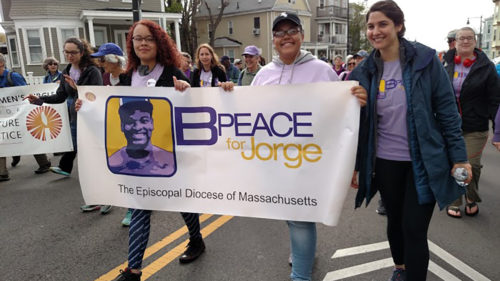 [Episcopal News Service] More than four years after the unsolved murder of 19-year-old Jorge Fuentes, a group of Episcopalians in Boston, Massachusetts, will again spend Mother’s Day walking for peace in his name.

Fuentes, an active member of St. Stephen’s Episcopal Church, was shot dead in September 2012 by an unknown gunman while walking his dog near his family’s home in Dorchester, a neighborhood in Boston. Fuentes was a respected Episcopal teen leader. Since 2013, the Diocese of Massachusetts has honored Fuentes by participating in the annual Mother’s Day Walk for Peace sponsored by the Louis D. Brown Peace Institute.

The diocese typically mobilizes hundreds of its parishioners to participate, some carrying the banner of B-PEACE for Jorge. The campaign was launched after Fuentes’ killing to focus the diocese’s work on addressing the root causes of violence, with attention to youth development and anti-violence advocacy. The campaign combines youth mentoring, jobs for teens, support for families and activism on gun reform legislation while partnering with established organizations. 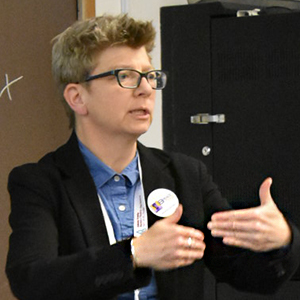 “We can help other organizations and other projects that are already underway have more success,” the Rev. Liz Steinhauser told Episcopal News Service. She is director of youth programs at St. Stephen’s Episcopal Church and one of the coordinators of B-PEACE for Jorge.

Organizers see the threat of violence as a public health issue, and “we want to focus on prevention, not intervention,” Steinhauser said in April at a Bishops United Against Gun Violence conference in Chicago, Illinois.

Steinhauser was one of more than a dozen adult and youth leaders from the Diocese of Massachusetts who attended the conference, “Unholy Trinity: The Intersection of Race, Poverty and Gun Violence.” She and others involved in B-PEACE for Jorge led one of the workshops, detailing the history and successes of the campaign. 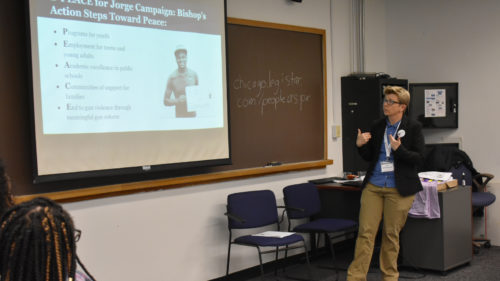 The Rev. Liz Steinhauser speaks April 21 at a workshop on B-PEACE for Jorge at the Bishops United Against Gun Violence conference in Chicago, Illinois. Photo: David Paulsen/Episcopal News Service

The campaign’s roots are in the tragedy of Sept. 10, 2012. The motive for the shooting remains unclear, but witnesses said, after the gunman opened fire, Fuentes was moving a friend to safety when he was shot in the head and killed.

Fuentes was a graduate of Madison Park Technical Vocational High School, worked as a caterer at Fenway Park and dreamed of joining the U.S. Marine Corps, family members told the Boston Globe. Fuentes also had long been involved in the youth programs at St. Stephen’s in Boston’s South End neighborhood, and he grew to become a teen leader who served as a role model for younger Episcopalians  – not just at his home church, but also around the diocese.

News of his death hit the congregation and the diocese hard.

“A lot of us were brokenhearted and felt like the work that we had been doing all these years was for naught and we had failed,” Steinhauser told attendees of the B-PEACE workshop at the “Unholy Trinity” conference. “But I think that out of that experience of grief came a sense that we had not failed Jorge, but we had failed the young man … who shot him.”

Under then-Bishop Thomas Shaw, who died of cancer in 2014, the diocese responded to Fuentes’ killing by researching ways it could get more involved in the fight against violence, initially forming the Jorge Fuentes Antiviolence Task Force. The work of that task force included focus groups with local youths, as well as studies of successful anti-violence initiatives around the country, and it led to the creation of B-PEACE for Jorge in 2013.

The PEACE stands for the campaign’s five action areas:

One highlight, shared at the “Unholy Trinity” conference, has been B-PEACE’s efforts to improve Ramsay Park, south of downtown Boston. The park is near the Church of St. Augustine and St. Martin, which hosts after-school and summer programs for several dozen students through a partnership with St. Stephen’s.

Students and parents raised concerns about the park because it was known for drug use, drunkenness and violence. Shootings had been reported near the park, and parents sometimes didn’t feel comfortable letting their children walk through that area, Kesanet Tesfazion, 17, said in Chicago.

Tesfazion has worked as a B-PEACE community organizer for two years. During that time, she and other youth organizers launched outreach projects in the park, including cleanups, murals, tennis and basketball lessons, peace walks and a youth dance.

They also contacted the Boston mayor’s office seeking assistance. The culmination of those efforts came in January 2016 when Mayor Marty Walsh, after visiting the park, announced in his State of the City speech that the city would spend $2 million to renovate Ramsay Park, with a new playground, safer lighting, better pathways and sports court upgrades. Those improvements are expected to begin this year.

B-PEACE’s focus on the park “was a good thing to show that we were engaged in this neighborhood,” Tesfazion said, but she doesn’t want the improvements in this and other neighborhoods to stop there. “I’m hoping that this renovation is a good start toward leading to more solutions.” 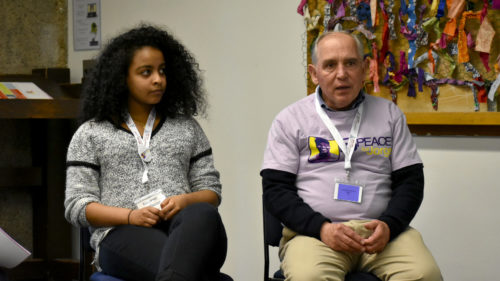 The B-PEACE campaign also has supported the diocese’s advocacy for state gun law reform and money for teen summer jobs. Having teens testify and share their experiences helps diffuse some of the polarization inherent in a volatile issue like gun violence, said Ned Notis-McConarty, an adult leader in B-PEACE’s advocacy efforts.

“It has a real impact on the process,” he said in the “Unholy Trinity” workshop. “I’ve been blessed to be able to see that and have seen a definite effect and some success because of their involvement.”

Steinhauser stressed that B-PEACE is a campaign of the diocese and is intended to engage everyone across a diverse spectrum, including suburban churches that may not experience the problem of gun violence in the same way St. Stephen’s has. The death of Fuentes was felt in all corners of the diocese because he was active in youth programs, mission trips and conferences with adult leaders.

“A lot of people were affected and a lot of people had questions of what can we do to stop this from ever happening again,” Steinhauser told ENS.

Now congregations across the diocese have a range of options for getting involved, from book studies to the Mother’s Day Walk for Peace on May 14. Some churches also have developed partnerships with public schools, offering tutoring or after-school activities, to fulfill B-PEACE’s action item on academic excellence.

Some members of the diocese also have participated in B-PEACE for Jorge by working on the Do Not Stand Idly By, a faith leader- and citizen-led campaign that presses gun manufacturers to improve the safety of their products. That, Steinhauser said, is one example of the diocese getting involved with an existing initiative to amplify its results.

These efforts may invoke Fuentes’ name, but it’s tragic that he is no longer alive to participate in the work of the church because of the systemic problems that lead to such senseless violence, Steinhauser said.

“We are participants in the decisions that allow that to happen,” she said, but the church and individuals also can be part of the solution. “It is my hope that B-PEACE is trying to do that.”