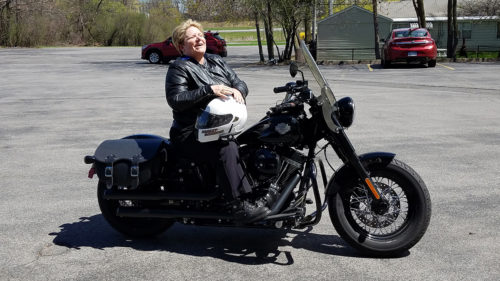 [Episcopal News Service] Central New York Bishop DeDe Duncan-Probe isn’t the kind of Harley-Davidson rider who publicly promotes her love of motorcycles. Riding, for her, is like a form of personal prayer, not a Sunday sermon. But on a recent ride through upstate New York, she had stopped for water at a store, and some men walked in and asked whose cool, new motorcycle was parked outside.

That’s mine, she said, striking up a conversation with the men. Eventually, their questions turned to what she does for a living.

So she told them: “Bishop of the Episcopal Diocese of Central New York.” And much to her delight, the conversation turned to the topic of faith, a discussion as lively as the one about the Harley Softail Slim. Her motorcycle had become a tool for evangelism.

“It’s given me opportunities to share the love of Christ in ways that are wonderful and include other people,” Duncan-Probe told Episcopal News Service in a phone interview. “I’ve just been blessed with conversations that wouldn’t have happened otherwise.”

Duncan-Probe, 55, will drive home the power of two-wheeled evangelism on May 13 when she presides over the annual Blessing of the Bikes event at Christ Episcopal Church in Jordan, a town to the west of Syracuse. After blessing the bikes, the bishop then will hop on her Harley to participate in a group ride, weather permitting. 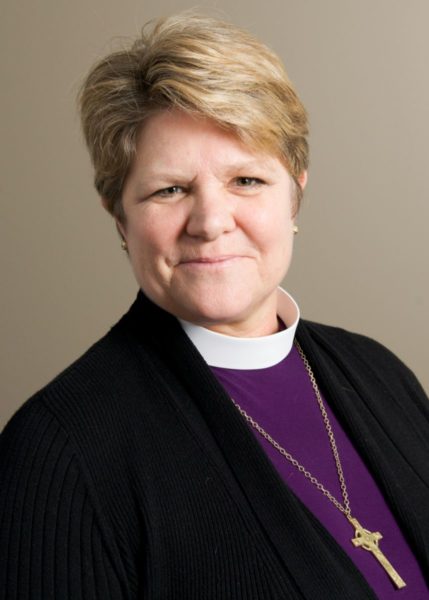 Duncan-Probe became the first female bishop of the Diocese of Central New York in 2016. During her walkabouts, a time when bishop nominees meet with the people of a diocese, she was asked how she stays spiritually centered. She brought up the spiritual feeling she gets riding a motorcycle down country highways with the wind hitting her face.

“When I get out on the motorcycle, I feel in touch with God in a way,” she told ENS. “It’s very centering. It’s just a real sense of renewal for me.”

And after just a few minutes on the bike, she added, she feels like she’s 15 again.

That’s how old she was when she first started riding motorcycles in her hometown of Fort Worth, Texas. Her brothers offered to let her ride behind them on a Yamaha 100, but her father insisted that she learn to ride on her own. She earned a motorcycle license before she learned how to drive a car.

She rode motorcycles off and on through high school and college, but when she moved to California to pursue graduate studies, she mostly gave up riding.

About five or six years ago, after being ordained as an Episcopal priest and while serving as a rector at St. Peter’s in the Wood Church in Fairfax, Virginia, she was at the church one Sunday morning in May when she heard a low rumble.

“The windows of the church were open. It was a nice day, and you could hear the motorcycles go by,” she said. It was the annual Rolling Thunder ride, when hundreds of thousands of Harley riders converge on the Capital Region to honor military veterans and those lost at war, and the sound made her think how much she missed riding.

She and her husband, who rode dirt bikes in his youth, decided to take a motorcycle safety class with their oldest son (they have three children). Then a few years ago, Duncan-Probe bought a used Harley, and this spring, her husband bought her a new Harley, the Softail, for her birthday.

They are mindful of safety precautions, riding only during daylight hours and avoiding rainy days. And Duncan-Probe said she prefers the country roads outside of Syracuse  to city streets or freeways. There is a “prayerfulness” to those rides, she said, something she missed during the years she had given up riding regularly.

She also feels drawn to the community of riders. Although new to Harleys, “it has opened up an opportunity for connecting with people I wouldn’t normally have connected with,” she said.

On a trip to a local Harley dealership to pick up a part, she encountered a large group of riders and was struck by how they all came from different backgrounds but were united in their love of motorcycles.

“As we started talking there was such hospitality and community and life, and I found it very humbling, because they welcomed me as I was,” Duncan-Probe said.

She sees parallels with the Episcopal Church. “God welcomes all of us as we are and into this community of faith.”

Now that her passion has become more public, she’s not interested in being known as the “biker bishop.” Rather, she encourages all Episcopalians to embrace what centers them in their faith – “those things that really connect us with God” – whether it be prayer, meditation, gardening, hiking or riding a Harley Softail along the scenic shores of New York’s Finger Lakes.