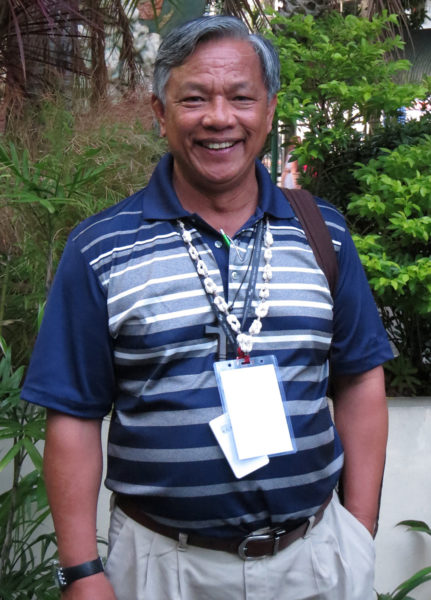 The Rt. Rev. Joel A. Pachao will be installed in June as the 6th prime bishop of the Episcopal Church in the Philippines. Photo: Caroline Carson

[Quezon City, Philippines]  The Rt. Rev. Joel A. Pachao was elected May 10 as the 6th prime bishop of The Episcopal Church in the Philippines.

Pachao, 61, is currently the bishop of the Episcopal Diocese of North Central Philippines, based in Baguio City in Benguet Province. He was one of three nominees.

In order to be elected, a candidate needed to receive a simple majority of votes from both clergy and the lay delegates, voting separately on the same balloting round. Pachao was elected on the second ballot, receiving 44 clergy votes and 39 lay votes, with 36 and 32 needed, respectively, for election.

The election took place during the church’s 10th Regular Synod being held May 9-12 at the church’s national compound in Cathedral Heights here.

“Perhaps we can learn from government. Each time a new administration takes over, most, if not all, previous priorities are abandoned and new plans and programs take their place covered by new rules. This must be avoided in the church. We do not live from one administration to the other, but rather, we exist to do the unchanging mission of Christ.”

Pachao will be installed as prime bishop late this year during a worship service at the Cathedral of St. Mary and St. John in Quezon City. Current Prime Bishop Renato Abibico will preside.

Pachao was ordained a priest in 1982 after graduating from St. Andrew’s Theological Seminary in Quezon City in 1980. He served as priest in seven locations until his consecration as bishop in 1993 at the Pro-Cathedral of The Resurrection in Baguio City. He is married to Precilla Gacod, and they have two grown children, Kelcy Pachao Salinas and Kent Pachao who are both nurses and currently reside in London.

The other nominees in the election were: Bishop Brent Harry W. Alawas (Diocese of Northern Philippines) and Bishop Dixie Copanut Taclobao (Diocese of Central Philippines).

The Episcopal Church in the Philippines began as a missionary diocese of the U.S.-based-Episcopal Church and later became an independent province in the Anglican Communion in 1990. In February, Presiding Bishop Michael B. Curry and Abibico signed a concordat on provincial companionship.

Editor’s note: A previous version of this story reported that the new prime bishop would be installed in June. That date has not yet been settled. The date of when the Church became an Anglican Communion province has been corrected.

— Caroline Carson is a seminarian at the Sewanee School of Theology and is currently in the Philippines on grants from the Seminary Consultation on Mission and the Episcopal Church Global Missions office.