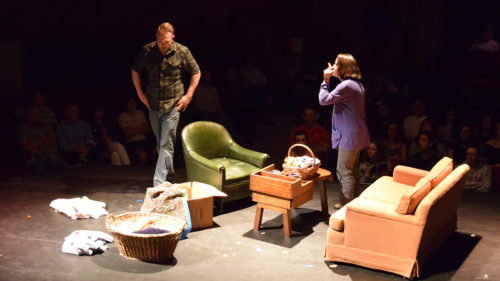 [Episcopal News Service] St. Luke’s Episcopal Church in Jamestown, New York, wanted to do its part to help to combat the prevalence of opioid addiction and overdose deaths in Western New York, but the congregation was wary of duplicating the work of well-established health and social service organizations.

So, St. Luke’s chose to support the cause the best way it could – by staging a play. 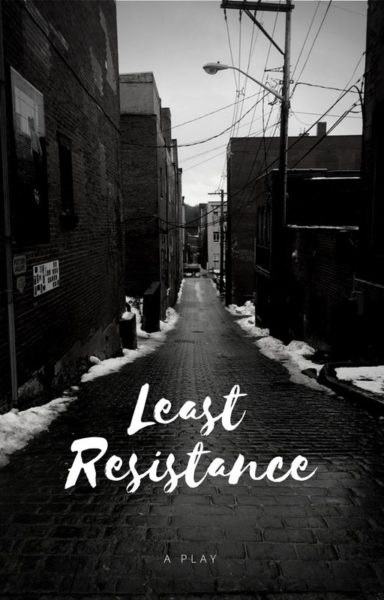 That play, “Least Resistance,” is based on dozens of interviews conducted with people in the Jamestown area who have been affected by drugs and the opioid epidemic, from an injured war veteran to grandparents forced to take custody of their grandchildren. The congregation’s hope is that by revealing the humanity behind the headlines, the production will pull the community together in support of neighbors who are recovering from similar crises.

“This is a way to tell the story in a positive way … that recovery is possible, that the community has all these people who are working hard,” said the Rev. Luke Fodor, rector at St. Luke’s. “We need to own that story.”

The play, which debuted last weekend and returns for encore performances May 5 and 6, grew out of conversations Fodor had with local religious and civic leaders after he took over at St. Luke’s about three years ago. Drug addiction was a common topic as Jamestown and Chautauqua County lost more and more residents to drug overdoses.

It is a trend that has caused alarm around the country. Opioids, including heroin, fentanyl and some prescription painkillers, are now blamed for more than six out of 10 drug overdose deaths in the United States, and the numbers of opioid overdoses has quadrupled since 1999, according to the Centers for Disease Control and Prevention.

New York State reported 2,754 drug overdose deaths in 2015. In Chautauqua County, with a population of about 135,000, the most recent state data show 15 opioid overdose deaths that year, as well as 88 emergency department visits or hospitalizations related to opioids.

What could one congregation do? Several parishioners at St. Luke’s had theater backgrounds, Fodor said, and about five years ago they had formed the Winged Ox Players, named for the traditional symbol of St. Luke. The productions typically focused on a thought-provoking work or social issue, with proceeds donated to a related cause.

Steven Cobb, 51, had been involved with Winged Ox Players from the start and now serves as artistic director. He also is a recovering drug addict.

“I had always kind of known the power of recovery stories,” Cobb told Episcopal News Service, citing his experience with 12-step programs. Fodor asked Cobb to share his story during one of St. Luke’s Sunday services.

Cobb grew up in Jamestown but left to attend college in New York City, and it was there that he got hooked on crystal meth. The addiction eventually left him homeless and jobless, and he decided to move back to Jamestown to improve his chances of staying clean. He said has been in and out of recovery for more than 15 years and sober the last seven.

Telling his story brought the reality of addiction and recovery to people in the congregation who had no personal experience with that struggle, Cobb said, and it helped remove the stigma of addiction.

That, too, is part of the mission of “Least Resistance,” the title of which refers to an addict’s successful path to recovery.

“What we need to do is create a safe space where people in recovery can feel normal in their recovery,” Fodor said.

He and Cobb had begun looking for existing plays that addressed the topic, but most of the works they found glamorized drugs, seemed out of date or simply weren’t appropriate for a family audience. Then they met Richard Olson-Walter.

Olson-Walter, 32, a native of Great Britain, had moved to Jamestown in 2015 after marrying his wife, an American woman who worked as director of youth and children’s ministries at St. Luke’s. Though he was working for a technology firm, Olson-Walter had experience writing plays, and Fodor and Cobb drafted him to write for Winged Ox Players.

But Olson-Walter had no experience with addiction and recovery, so Cobb, who works as associate director of Mental Health Association of Chautauqua County, helped arrange for Olson-Walter to interview local people affected by the drug epidemic.

More than 30 interviews later, “Least Resistance” was born. The play features 14 scenes over two acts, a mix of monologues and staged conversations, as well as a few scenes intended primarily to provide information on addiction. In the current production, 21 actors bring the characters to life.

Some of the characters are based on individuals Olson-Walter interviewed, with their names changed, while other characters are composites of multiple people. All the scenes incorporate real-life examples, with some dialogue taken word for word from the experiences shared by Jamestown residents.

One character is an Army veteran who, after being wounded in Afghanistan, was prescribed powerful painkillers. When he returned home, he realized he was addicted. Another scene portrays grandparents who have taken custody of a granddaughter who has been abandoned by a drug-addicted mother. That scene draws on the experiences of multiple grandparents interviewed for the play.

“We wanted to try and make sure we could show as many viewpoints as possible,” Olson-Walter said.

The play also features a character based on Cobb’s story of addiction and recovery. “I’ve worked very hard to accept my story and understand my story,” Cobb said, but seeing a version of himself on stage helped him confront his own lingering discomfort and even shame about his past.

He hopes the play will be helpful and cathartic for other recovering addicts, some of whom attended the first weekend’s performances.

“I’ve noticed they have been very happy to know that their story is being told to the wider community, so that the community knows of the struggles and knows of the hope,” Cobb said. “It seems to be validating to the people in recovery that the larger community is getting an honest and accurate point of view.”

After the show concludes its local run, the congregation has been in talks to stage the production in the Buffalo area later this year, and excerpts will be performed May 16 at an annual event in the Jamestown area called Hope & Healing for Chautauqua.Money raised through the play will be used to support United Christian Advocacy Network City Mission, which provides transitional housing to the homeless and those dealing with substance abuse.

Fodor said the congregation also has been contacted by churches in Georgia and Connecticut about staging their own productions of “Least Resistance.” In that way, the play can grow and evolve organically, with each production incorporating some of its own community’s stories of addiction into the work.

“My hope is the play itself becomes a tool that people can utilize it as a springboard to launch them in to more research on the matter,” Fodor said.