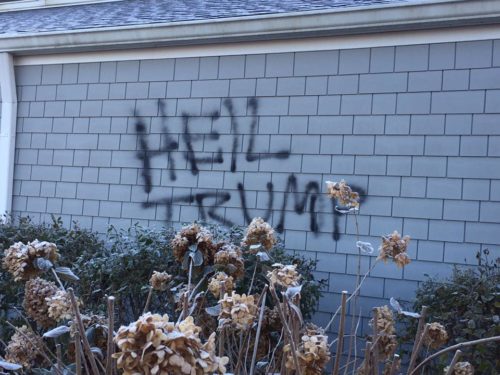 [Episcopal News Service] A staff organist has been arrested in the post-election vandalism at an Episcopal church in Indiana – an incident that generated national headlines in November as a possible case of politically motivated hate speech, but one that prosecutors now say was instead the act of someone hoping to mobilize others disappointed with the election results.

Nathan Stang, 26, faces a misdemeanor count of institutional criminal mischief for the damage to St. David’s Episcopal Church, the congregation in Bean Blossom, Indiana, where he serves as organist. He was arrested May 3, three days after Episcopal Church Presiding Bishop Michael Curry came to St. David’s to preside at the Sunday Eucharist and preach.

The congregation feels “like we had the rug pulled out from underneath us,” the Rev. Kelsey Hutto, priest-in-charge at St. David’s, told Episcopal News Service in a May 3 interview.

Earlier in the day, Hutto released a statement on the church’s website saying, “Nathan is a member of our St. David’s family and naturally there is a certain amount of betrayal with this act.”

“Over the coming weeks and days we will process our emotions regarding this hurtful act. I ask that we remember what we have stood for over the past few months – love and forgiveness,” she said.

St. David’s was one of at least two Episcopal congregations that were targeted with graffiti on the weekend after Donald Trump was elected president. The graffiti at St. David’s included the words “Heil Trump” as well as a gay slur and a swastika. 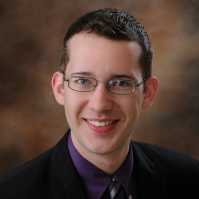 Organist Nathan Stang is shown in a photo posted with his bio on the website of St. David’s Episcopal Church.

Stang reported the vandalism at St. David’s to Hutto on Nov. 13, saying he discovered it when he arrived that Sunday morning to prepare for services.

A statement released by Brown County Prosecuting Attorney Theodore F. Adams said Stang, when confronted with results of the nearly six-month investigation, confessed to spray-painting the graffiti himself.

“Stang stated that he wanted to mobilize a movement after being disappointed in and fearful of the outcome of the national election,” Adams said, adding that investigators concluded this was not a hate crime. “Stang denied that his actions were motivated by any anti-Christian or anti-gay motivations.”

Stang was arrested about a half hour west of the church, in Bloomington, Indiana, and brought to Nashville, Indiana, to be booked into the Brown County Jail, the Herald Times newspaper reported, adding that he was released after posting a $155 bond. The charge carries a maximum potential sentence of one year in jail and a fine of up to $5,000.

“This incident has been a blight on our small and diverse community, and I am proud of the hard work put forth by the Brown County Sheriff’s Office,” Adams said in his news release. “It was truly a team effort.”

Bean Blossom, Indiana, is a town of fewer than 3,000 people some 50 miles south of Indianapolis. St. David’s serves people from five communities in Brown County, Indiana, focusing its outreach on addressing hunger and the needs in a county where 97 percent of its 15,000 residents are white.

The vandalism thrust the Episcopal congregation into the national spotlight, along with Church of Our Savior in Silver Spring, Maryland, where a sign was found defaced with the words “Trump Nation Whites Only” on the same day.

Hutto told ENS in November that her congregation was trying to respond to the vandalism with a message of love and welcome.

“I’ve been using Presiding Bishop Curry’s statement that ‘sometimes doing the right thing is not always the popular thing,’ and we are living into that, and proud of that,” Hutto said then, “and we believe that facing hate with love is the right way to go about our call as Christians.”

Stang has served for about a year in the paid position of organist while he attends Indiana University, in Bloomington. St. David’s website describes him as “a composer, teacher, cat lover and organist” who is pursuing a doctorate in music.

Hutto told ENS after Stang’s arrest that she was unaware he was a suspect in the vandalism until the morning of his arrest. The congregation expects Stang to be held responsible, but the news of his involvement will not change how St. David’s responds to the incident, she said.

“The fact of the matter is, it didn’t matter who perpetrated the crime. In the end, our message of love and forgiveness extends to all,” Hutto said.

Stang’s future with the congregation was expected to be discussed May 3 by the vestry at a previously scheduled meeting. And Hutto said the incident, arrest and message of forgiveness likely will be a topic at the congregation’s regular Wednesday evening service.

Hutto also confirmed that Stang played the organ for last Sunday’s service, with the presiding bishop in attendance. 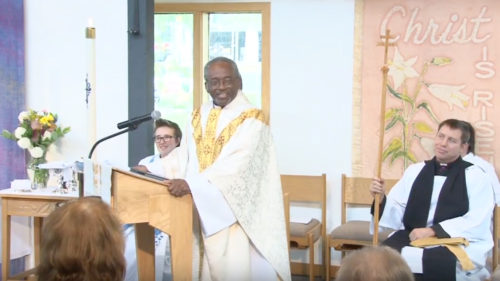 Curry was in Indiana over the weekend to preside at the ordination and consecration of the Right Rev. Jennifer Baskerville-Burrows as the 11th bishop of the Diocese of Indianapolis, the Episcopal Church’s first black female diocesan bishop. The next day during his sermon at St. David’s, Curry conveyed the message that “love wins.”

“You were here where we needed God’s unconditional love,” Curry told the congregation, according to a news release from the diocese detailing the visit. “My friends, we have a world that is trying to tear itself apart. We have to love it back together.”

Stang had confessed to police two days earlier, according to court documents, which reveal that police identified the organist as a suspect early in their investigation by tracing his location through cell phone records.

On April 28, he told a Brown County sheriff’s detective that he “felt scared and alone because of the election results,” the court documents say. He said he wanted to “mobilize a movement” but had not expected the intense media attention that the vandalism generated. He later told police he regretted his actions.

“I suppose I wanted to give local people a reason to fight for good,” he said in a written statement to police. “I, of course, realize now that this was NOT the way to go about inspiring activism.”

Baskerville-Burrows issued a statement May 3 saying she was saddened by the news.

“This was a hurtful, dishonest and profoundly misguided action that stands against the values of the people this diocese and the Episcopal Church, and we will continue to cooperate with the authorities who are pursuing this case,” the bishop said.

“We are living now in a political climate that is so divisive and highly charged that people from all across the political spectrum are making thoughtless and hurtful choices that they believe are justified by the righteousness of their causes. As people who follow Jesus, we must find a different way.”