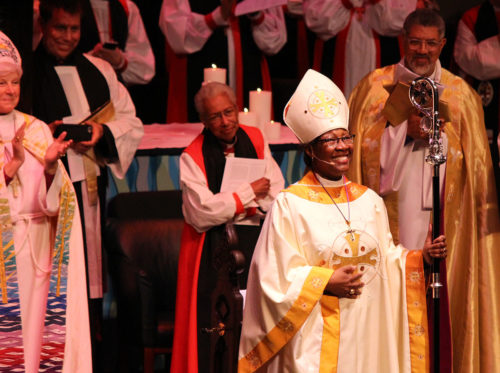 [Diocese of Indianapolis] The Rev. Jennifer Baskerville-Burrows was ordained and consecrated the eleventh bishop of Indianapolis April 29, making her the first black woman to lead a diocese in the history of the Episcopal Church and the first woman to succeed another woman as diocesan bishop.

Presiding Bishop Michael Curry led the service as chief consecrator and was joined by more than 40 bishops from across the church. Nearly 1,400 participated in the service at Clowes Hall on the campus of Butler University. Diocese of Chicago Jeffrey D. Lee preached. From 2012 until her election as bishop, Baskerville-Burrows served on Lee’s staff as director of networking in the Diocese of Chicago.

“Indianapolis, you have called a strong, loving and wise pastor to be your bishop,” said Lee, in a sermon that was interrupted by applause several times. “She will love you, challenge you, tell you the truth as she sees it and invite you to tell it as you do. She will pray with you at the drop of a hat and care for you in ways that will not diminish your own agency. She will empower you. She will lead. Count on it.” 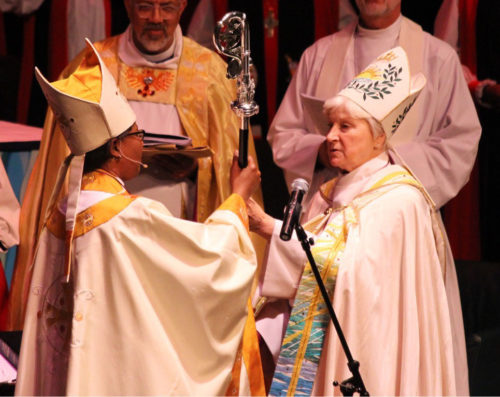 Among the co-consecrators at the service was the Rt. Rev. Barbara Harris, the first female bishop in the Anglican Communion. Before the consecration, Baskerville-Burrows told the Indianapolis Star, “The first thing that comes to mind is how grateful I am to the women that have come before. Barbara Harris will be at my consecration, and when I think about what she’s done for me and how I’ve even encountered little girls saying, ‘Oh my gosh. One day, may I discern such a call?’ That is just everything.”

Harris retired in 2003 as bishop suffragan of Massachusetts and was succeeded by the Rt. Rev. Gayle Harris (no relation), who was also a co-consecrator of Baskerville-Burrows.  The other co-consecrators were Bishop Catherine Waynick (her predecessor), Northern Indiana Bishop Douglas Sparks, Atlanta Bishop Robert Wright and Evangelical Lutheran Church in American Indiana-Kentucky Synod Bishop William Gafkjen.

The order of service for the ordination and consecration is here.

She was seated the next day in Christ Church Cathedral in Indianapolis.

“Sitting at the crossroads of America, this diocese has a special call to bring healing, hope and love to a world that is too often fearful, hurting and polarized,” Baskerville-Burrows said before her election. “I see the Diocese of Indianapolis as an inclusive community of hope bearing the light of Jesus Christ to central and southern Indiana and the world.”

Before her work in Chicago, Baskerville-Burrows was rector of Grace Episcopal Church in Syracuse, New York, where she also served as Episcopal chaplain at Syracuse University. She holds a bachelor’s degree from Smith College, a master’s degree in historic preservation planning from Cornell University and a master of divinity from Church Divinity School of the Pacific. She and her husband, Harrison, met at her ordination to the priesthood in 1998 and were married in 2003. They have a son, Timothy, age 6, who is a kindergarten student at St. Richard’s Episcopal School in Indianapolis.

Previous ENS coverage of the historic weekend is here.