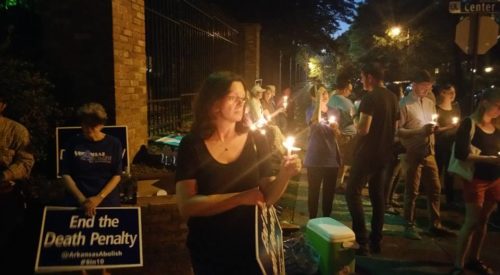 Anti-death penalty activists hold a vigil outside the governor’s mansion in Little Rock, Arkansas, on April 20 in this photo shared on Facebook by the Arkansas Coalition to Abolish the Death Penalty.

[Episcopal News Service] Episcopalians in Arkansas are preparing to gather once more for a prayer service on the eve of what is expected to be the final in a series of expedited executions by the state, which activists say could give momentum to efforts to abolish the death penalty.

Arkansas is scheduled April 27 to execute convicted murder Kenneth Williams, 38, the fourth death row inmate to be executed in a week, as the state rushes to carry out the sentences before its stock of one of its lethal injection drugs expires. Before this month, Arkansas had not carried out an execution in nearly 12 years.

As it did on the eves of the previous three executions, Trinity Episcopal Cathedral in Little Rock will hold a brief ecumenical service at 6 p.m. April 27 followed by a candlelight vigil that will culminate in the toll of bells. The service will offer prayers for Williams, for his victims and their families and for the corrections employees who will be carrying out the execution.

“For all of these, and for ourselves, we will pray for hope, for strength and for mercy,” cathedral spokesman Josiah Wheeler told Episcopal News Service.

The Episcopal Church has stood against the death penalty since it was reinstated by the Supreme Court in 1976, with several General Convention resolutions calling for the death penalty to be abolished, most recently in 2015.

The death penalty still is in effect in 31 states, but the number of executions nationwide has dropped steadily since 1999, from a high of 98 that year to 20 in 2016, according to the Death Penalty Information Center. Arkansas has executed 30 inmates since 1976 but none since 2005, until this month.

The state had planned to execute eight inmates in 10 days, starting on Easter Monday, but four of those executions have been halted by court order.

The Episcopal Diocese of Arkansas has been active in efforts to end capital punishment in the state, and Bishop Larry Benfield joined clergy from other denominations on April 12 in a rally at the Capitol to call on Gov. Asa Hutchinson to stop the executions. 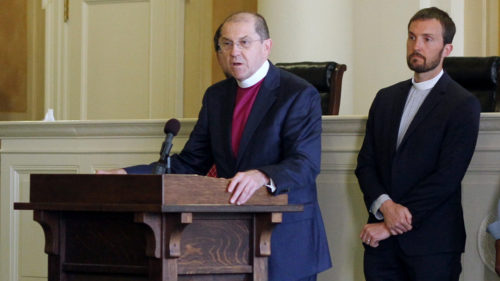 “We have believed in the goodness of hard work and respect for neighbor and faith in God. But we are being led astray by a peculiar ethic that states that vengeance is a virtue, when in fact it is not,” Benfield said, according to quotes provided by the diocese. “I can only speak from the Christian tradition, but I can say definitively from my own religious upbringing that vengeance is not a mark of Christian ethics.”

The Rev. Mary Janet “Bean” Murray, a retired deacon, and member of St. Michael’s Episcopal Church in Little Rock, said she and other anti-death penalty activists are disheartened that a fourth execution is expected to be carried out, but they already are looking beyond this week in stepping up their push for changing state law. She is vice president of a group called the Arkansas Coalition to Abolish the Death Penalty, which met this week to discuss its future strategy.

“We will continue to work and work until the death penalty is no longer an issue,” Murray told ENS.

Caroline Stevenson, another Episcopalian from Little Rock, said the recent executions may give people who favored the death penalty a reason to rethink their support.

“I think that we can change some minds with the facts,” said Stevenson, a member of Episcopal Peace Fellowship. “We have to challenge people’s faith and say, this isn’t what Christianity is all about.”

Four states have abolished the death penalty since 2009: New Mexico, Illinois, Connecticut and Maryland. Nebraska’s Legislature passed a law in 2015 eliminating capital punishment, but it was reinstated by popular vote in 2016.

Public opinion has for decades tilted in favor of the death penalty, with a Gallup poll from 2016 showing 60 percent of respondents supporting a death sentence for someone convicted of murder. Support typically decreases when alternatives are suggested. When asked whether they would choose to sentence a murderer to death or to life in prison, 50 percent said they would choose the death penalty in a 2014 Gallup poll.

The fight to abolish the death penalty may remain an uphill battle in pro-death penalty states like Arkansas, but Murray and other Episcopalians see killing of any kind as incompatible with what their Christian faith teaches.

“When we say in our baptismal vows that we’ll respect the dignity of every human being, that includes criminals too,” Murray said.