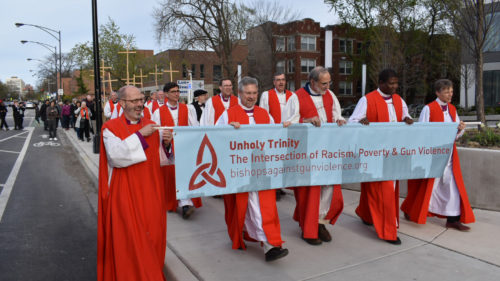 [Episcopal News Service – Chicago, Illinois] Eager to work toward solutions to the problems of poverty, racism and gun violence, Episcopal bishops, clergy members and lay people gathered for three days last week for a conference in Chicago, the American city that recorded the most homicides in 2016.

The city’s recent surge in deadly violence provided a grim backdrop for Bishops United Against Gun Violence’s “Unholy Trinity” conference held April 20-22 at the Lutheran School of Theology in the city’s Hyde Park neighborhood. But speakers regularly emphasized that the problem is not isolated to one city, nor is the outlook as bleak as many news headlines suggest. 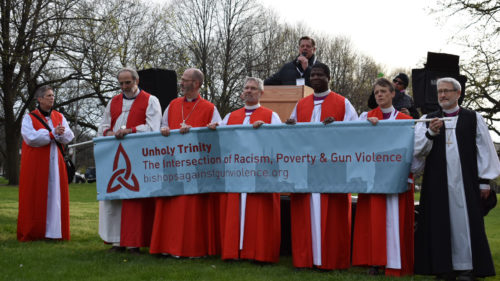 The Rev. Michael Pfleger, a Roman Catholic priest and activist in Chicago, speaks from a podium at the midpoint of the Unholy Trinity procession April 21. Photo: David Paulsen/Episcopal News Service

The conference drew about 150 attendees from 37 Episcopal dioceses, including 25 bishops and one bishop-elect. The attendees were predominantly Episcopalians, though other Christian denominations also were represented, including Lutheran and Presbyterian, and a Roman Catholic priest, the Rev. Michael Pfleger, preached at the halfway point of a public procession on April 21.

An underlying theme of the conference was how the Episcopal Church and Christians, in general, have a unique ability to be a force for change in the country despite daunting challenges. Among those challenges is the belief of some Christians that social justice causes should not be the church’s causes, a stance that the Rev. Julian DeShazier picked apart in the conference’s centerpiece “three-note” presentation on April 21.

“When did it become revolutionary for Christians to care about justice?” DeShazier posed rhetorically to the conference attendees in the School of Theology’s chapel.

DeShazier, senior pastor of University Church at the University of Chicago who also is a hip-hop musican known as J.Kwest, said too many Christian churches have become “think tanks” when they should be “action centers.” He drew on his congregation’s experience working with activists on Chicago’s South Side in pressing the university to open a trauma center. The surrounding neighborhoods, despite high rates of violence, have no trauma center close by.

The other two presenters were Natalie Moore, a WBEZ-FM reporter who covers the South Side, and the Rev. Kelly Brown Douglas, a professor of religion at Goucher College in Baltimore, Maryland, and canon theologian at Washington National Cathedral.

Moore argued that racism is partly behind the national focus on Chicago’s violence, and she also suggested a political motive to criticisms of the city, former President Barack Obama’s hometown. She urged listeners to look beyond the stereotypes, such as the inner city as a war zone, as they work to end gun violence.

.@natalieymoore: If we talk about cities as war zones, it's young black men who are the enemy. Deeply unhelpful. #Unholy3

Douglas, in her presentation, detailed racism’s roots in Colonial-era America before outlining an indictment of white supremacy in the U.S. The higher rates of poverty and incarceration that blacks face today, she argued, are continuing effects of a “violent anti-black narrative that helps to define American identity.”

Given such historic and systemic oppression, why is it surprising that blacks face a greater threat of violence, Douglas asked.

“The system has been structured to lead to their death, not to their life,” she said.

If the words of the three speakers were meant to confront the conference attendees with the hard, historical realities of racism, poverty and gun violence, much of the rest of the conference was aimed at teaching ways to transcend that history and change the oppressive system that persists today.

Activism against gun violence has long the backing of the Episcopal Church’s General Convention, which has passed resolutions dating back to 1976 supporting various forms of gun control.

Workshops offered April 21 in the afternoon featured discussions of how to lobby legislators, how to engage with evangelical Christians on these issues and how to develop community organizing campaigns. In one session, the Rev. Carol Reese discussed her work as a chaplain in the trauma center of Chicago’s John H. Stroger Jr. Hospital, while in another session a delegation from the Diocese of Massachusetts explained the diocese’s successes working with youth in a program called B-Peace for Jorge, named after a young man who was murdered in 2012. 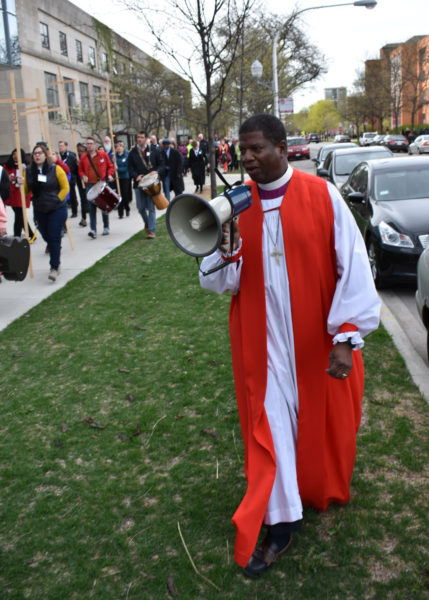 The bishops who convened and hosted the conference echoed the call to action on its final day, April 22. Diocese of Connecticut Bishop Ian Douglas of the and Diocese of Newark Bishop Mark Beckwith divided the attendees into four groups to share ideas on key areas of emphasis: public liturgy, communication strategy, political advocacy and community organizing. And Diocese of Chicago Bishop Jeffrey Lee followed up by speaking to the full conference about ways public liturgy can reach people beyond the walls of a church.

The conference demonstrated the power of public liturgy on the evening of the second day with a procession down the sidewalks of the streets that lead through the University of Chicago.

Diocese of Oklahoma Bishop Edward Konieczny kicked off the procession with a speech atop the School of Theology’s steps. Lee, Douglas and Beckwith, as well as Diocese of Maryland Bishop Eugene Taylor Sutton and Diocese of Washington Bishop Mariann Edgar Budde, then carried the conference’s banner as they led the crowd down 55th Street and Ellis Avenue to the Midway Plaisance Park, where Pfleger spoke. 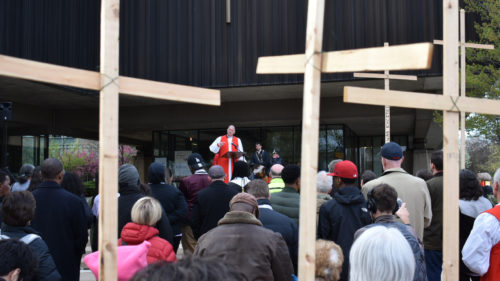 Each of the three days began with a contextual Bible study led by Dora Rudo Mbuwayesango, an Old Testament professor at Hood Theological Seminary in Salisbury, North Carolina. Participants picked apart two unfamiliar Old Testament passages and the well-known gospel parable of the Good Samaritan, mining them for deeper biblical meaning while also discussing them in the context of the conference.