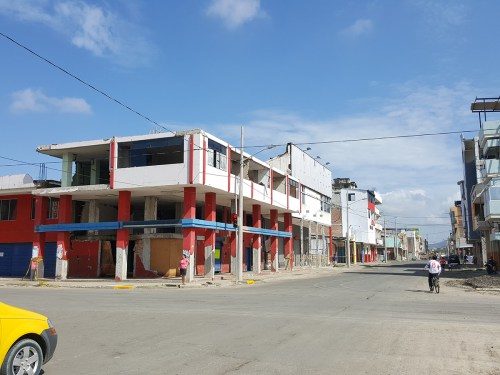 [Episcopal News Service] It was nice out that afternoon, so Lidilia Alvarado, 71, was taking a walk near Tarqui beach with her niece. Suddenly, she saw something different in the sea: the water was getting further and further away from the shore as though emptying out through a drain. “I didn’t know what it was, but I told my niece that we should go home,” she said.

In a matter of seconds, the confusion had gotten worse, the ground was moving, people were shouting, while sirens and some alarms went off. “I made it home, but all I could hear and see were loud explosions and pieces of walls falling,” Alvarado recalled. Later she understood that there had been a 7.8-magnitude earthquake. Ecuador was in mourning.

On April 16, 2016, the tragedy hit the Ecuadorian coastal region. Data from the National Decentralized System of Risk Management indicate that 661 people died, 6,274 were injured, and 28,678 were sent to shelters after their homes suffered damage. A year has gone by since the quake, and in Manta, a coastal city in Manabí Province, the population still faces many difficulties. The Diocese of Ecuador Litoral has been a spiritual companion to the congregations of the four churches most affected by the earthquake and it has also worked with community members who lost everything and are still one year later trying to return to their normal lives.

“It’s still hard; things aren’t back to normal yet. That doesn’t happen overnight,” the Rev. Cristóbal León, Archdeacon of Manabí, told Episcopal News Service. Throughout the past year, the church has conducted many spiritual and social activities amidst devastation.”

The challenges have been many. The ruins of many buildings in downtown Manta are reminders of the tragedy, soldiers are still on the lookout for the looting of uninhabited houses and low economic activity prevents many families from emerging from a state of crisis, said León.

“We always tell the communities not to despair. There are other places that were also afflicted by earthquakes before us and they haven’t been able to move forward. Haiti, for example, still hasn’t recovered. Here at least already few shelters remain,” he said. 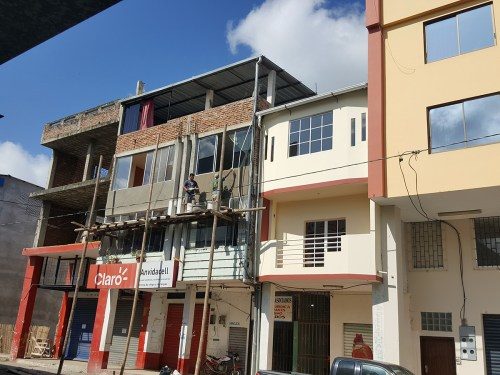 A year after the April 16, 2016, 7.8 magnitude earthquake, Portoviejo, Ecuador, is slowly beginning to revive its economy. Photo: Ernesto Chiran

In the case of Alvarado, her house sustained partial damage, but, because of the aftershocks, she and her family were forced to leave because of the risk. “We left for a while, but since the empty houses were starting to get broken into, we went back without anyone’s permission. We went in and we stayed. I spoke with the mayor later, I explained to him that, as a retired person, I have no money,” she said.

Alvarado is a retired lawyer, but her pension is small. With no possibility of renting out the rooms of her house, moving forward hasn’t been easy. “We’re trying to lead a normal life, putting our faith in God. I haven’t been able to completely rebuild my house, but where we live we’re safe,” she said.

A year ago, the Ecuadorian faithful responded in solidarity toward the most affected areas. They sent food supplies and clothing to the shelters. International aid also come immediately, however, the hard part came months later, when it was time for things to return to normal.

“When the shelters closed down, the aid stopped too. At first, there was an immediate response with food supplies, clothing and medicine; but then the second phase came, of helping these people get their lives back,” said León.

The government offered up to $10,000 in aid to rebuild houses if certain requirements were met, and created three aid programs for that purpose through the Ministry of Urban Development and Housing. But in the communities, not all those affected met the requirements.

The Diocese of Litoral began an aid program to support some members of the community that were ineligible for state grants. The Rev. Jairo Chiran Guillén, a deacon, was in charge of coordinating the aid: he visited the affected houses with a construction foreman and compiled budgets [estimates], and then he sent them to the diocese for its approval.

“We tried to promote solidarity, the families worked together on reconstruction, we just bought the materials and paid the foreman that was supervising the work. The assistants were the community itself. It was a community job,” explained Chiran.

Ten houses were rebuilt with support from the Diocese in the communities of Las Pilas and Portoviejo, said Chiran. The diocese also created a solidarity loan program with the support of Episcopal Relief & Development. People applied for a moderate amount of money to start a small business and paid 50 percent of the amount in installments with no interest.

“There are people who lost their jobs and are still unemployed because the economy has barely been revived,” he said.

In Manta, it wasn’t until December 27, 2016, that the shopping center known as “New Tarqui” opened. The shopping center has 1,800 small commercial spaces, offering everything from food to clothing and footwear. “The shopping center turned out very well; it has given life to the area that was very deserted for a long time. Now there’s more movement,” said León.

Hope for the future

Just as in the rebuilding of the houses, the communities affected by the earthquake have learned that their lives can also be rebuilt with patience and with faith, brick by brick. “Personally, I saw a revival of faith. In the midst of the tragedy emerged hope and full faith in God,” said Chiran.

Chiran has requested an additional $20,000 to continue offering solidarity loans; he recognizes that up to now the loans offered have been small. He also shared enthusiastically that Episcopal Relief & Development has offered an education program in microfinance and how to manage a household economy. “We see that as a blessing because in the communities where we serve people don’t have many opportunities and it’s not just about offering a loan, but providing guidance about how to manage the small amount of money that can be lent to them,” he said.

— Clara Villatoro is a freelance journalist based in San Salvador, El Salvador.