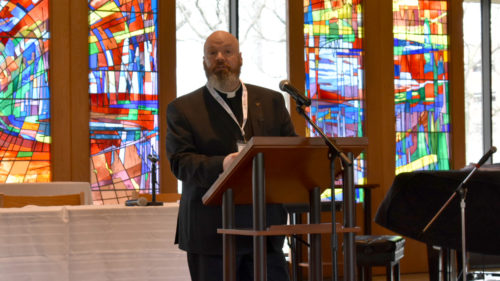 The Rev. Scott Russell, an Episcopal chaplain at Rutgers University, speaks April 21 about his experience as a campus minister during the 2007 massacre at Virginia Tech. He spoke at a workshop at the Bishops United Against Gun Violence conference in Chicago. Photo: David Paulsen/Episcopal News Service

[Episcopal News Service – Chicago, Illinois] When a gunman opened fire killing 28 fellow students, four professors and himself 10 years ago on the campus of Virginia Tech, word of the massacre reached the Rev. Scott Russell through a news broadcast.

Terrifying details were being reported on the TVs at JFK International Airport in New York City. Russell, in airport customs after returning from vacation in Germany, was paralyzed as he learned of developments in Blacksburg, Virginia, where he was the associate rector at Christ Episcopal Church and campus minister.

“I’m standing there frozen in front of the TV screen,” Russell recalled. He canceled plans to visit an uncle in New York City and instead drove several hours home to be with students and parishioners, helping them cope with the aftermath of unthinkable tragedy.

Russell, 49, shared those experiences April 21 with attendees of “Unholy Trinity: The Intersection of Racism, Poverty and Gun Violence,” a three-day conference held by Bishops United Against Gun Violence at the Lutheran School of Theology in Chicago. His workshop also focused on how communities recover from such tragedies and the role of faith leaders in helping survivors and victims’ families and friends heal.

“There was much confusion and panic,” Russell, now a chaplain at Rutgers University in New Brunswick, New Jersey, told the handful of people who attended his first workshop at the conference.

When he arrived back in Blacksburg, Christ Episcopal Church parishioners welcomed him in tears. He met and prayed with the students who frequented the congregation’s Episcopal student center, and he began helping them process their thoughts: What do we do now? Where do we go from here? The university’s candlelight vigil, held the day after the rampage, helped unite the campus community.

“What a way to say to these people in shock, don’t isolate yourself. Come together,” Russell said during the workshop, noting that the large crowd attending the vigil at one point erupted spontaneously in the school’s football chant.

But emotions were still raw. One of the Episcopal students knew five classmates and two professors killed in classrooms. “She was just beside herself, just thinking she easily could have been in one of those classes,” Russell said.

The nonstop news coverage didn’t help the grieving process, he said. Many of those affected by the massacre grew to resent the media presence, finding it intrusive, and they were relieved when, in time, coverage of one of the country’s deadliest mass shootings dropped off the front pages.

Even out of the national spotlight, Blacksburg faced challenges in coming to grips with what had happened, and one of the underlying messages of Russell’s presentation was that some of the hardest lessons for him and the 30 or so other chaplains focused on how survivors deal with grief at their own pace. That is something chaplains and ministers need to consider when providing pastoral care, Russell said.

The university canceled classes the week after the massacre, and some students traveled home to be with their families. When they returned, many of them were ready to move on, but others who had stayed were still in the deepest stages of grief, Russell said.

“As a pastor, I have to help where they are,” he told Episcopal News Service in an earlier telephone interview.

He also learned to appreciate that some people grieve in ways that may at first seem shocking. He told of confronting one student at the Canterbury House next to the church who could be heard playing a first-person shooter video game. Another student told Russell he was having a hard time sleeping because he still felt pressure in his graduate studies but was preoccupied with the massacre.

In both cases, Russell said, he talked with the students about how they were dealing with the trauma and made sure to follow up with more conversation so they knew they weren’t alone.

Russell and other chaplains also learned that mass shootings can bring a thicket of opposing views to navigate. Some students and faculty members who hadn’t been comfortable with the prevalence of guns before the Virginia Tech massacre felt their opposition to guns hardening, Russell said, but a few students’ views moved in the opposite direction, in favor of concealed carry permits and allowing students to take guns to class for protection. 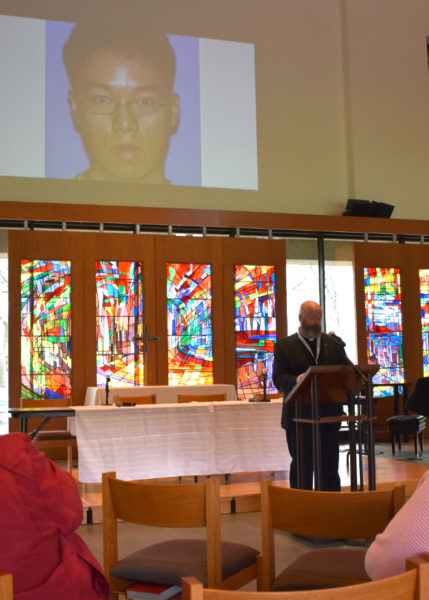 The Rev. Scott Russell describes tensions in Blacksburg, Virginia, over whether to include Cho Seung-Hui when listing the victims of the massacre. Photo: David Paulsen/Episcopal News Service

As in other mass shootings, another polarizing subject was the gunman himself. Cho Seung-Hui, 23, was a Virginia Tech senior with a history of mental illness who had made suicidal remarks to roommates in the past.

At Christ Episcopal Church after the shooting, the names of the victims were read at services. Cho had been a student of one of the parishioners, and she asked that his name be included. At one service, that sparked strong objections from another parishioner, who was appalled that Cho would be memorialized in the same way as his victims, Russell said. Some survivors prefer to never mention the gunman, while others want to understand why he turned violent.

Russell was careful to acknowledge these individual differences but also tried to frame the question as one of faith values.

“In the Episcopal and Anglican tradition, we pray for those who have died,” Russell said during his presentation. “Do we discriminate for what they have done?”

Tension over that question continued that year. Russell preached a sermon in the fall about forgiveness, alluding to Cho and the massacre. A student approached him afterward outraged, but it is a message that Russell wanted parishioners to hear.

Clergy, too, need support in the aftermath of such high-profile shootings. Russell said he and fellow ministers were provided counseling, including through assistance from Episcopal Relief & Development.

The scars of April 16, 2007, may never heal fully. The memories of that day came flooding back for Russell when he learned of the shooting last year at an Orlando nightclub, where a gunman killed 49 and injured 53.

Russell left Blacksburg in 2013 and became a rector at a congregation near Pittsburgh, the city where he was ordained in 2002. He still felt called to campus ministry, though, and eagerly accepted the chaplain job at Rutgers last year. This week, he attended services at Virginia Tech to mark 10 years since the massacre. 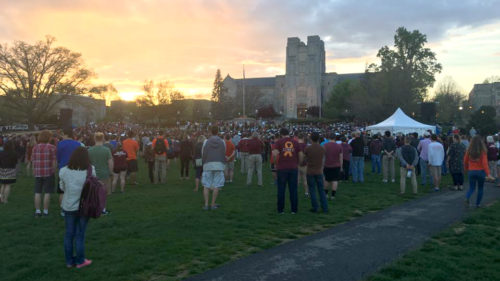 His experience at Virginia Tech has left him sensitive to potential threats, aware that senseless violence could break out at any time. It also has helped define his sense of mission as a Christian and as a university chaplain.

“I encourage people to never forget to look to those who are being left out, those who are on the margins – not just because they might become violent, but because that’s where, I believe, in many ways our primary work is,” Russell told ENS. “I’m always reminded Christ preached to the margins.”