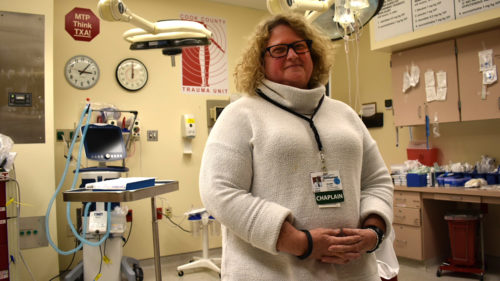 [Episcopal News Service – Chicago, Illinois] John H. Stroger Jr. Hospital of Cook County operates one of the busiest trauma centers in the country. The Chicago hospital has hundreds of physicians, medical residents and fellows on its staff but only one employee with the title of violence prevention coordinator and the word “chaplain” on her name badge.

Many of the patients the Rev. Carol Reese sees face a crisis of faith as much as a medical crisis, especially teenagers injured by gunfire.

“These kids are just trying to hold on to whatever bit of hope in life that they can,” Reese, 60, an Episcopal priest said in an interview last month at the hospital. “For some of them, their faith helps. For some of them, it gets pretty shaken in the midst of all of this.”

Reese will share her insights into communities traumatized by gun violence and public health approaches to violence reduction at a conference this week in Chicago held by Bishops United Against Gun Violence. “Unholy Trinity: The Intersection of Racism, Poverty and Gun Violence” is being held at the Lutheran School of Theology from April 20 to 22 in Hyde Park.

Reese sees firsthand the unholy trinity’s intersection in the hospital and as program director for Healing Hurt People-Chicago, a hospital-university partnership that studies ways of keeping teens safe while working with young victims as they recover and return to their neighborhoods.

Gun violence has surged in Chicago in recent years. The city, the nation’s third largest, recorded more than 4,300 shootings in 2016 and the most homicides in the U.S.

“Gun violence is an issue that cuts across all kinds of boundaries,” Diocese of Chicago Bishop Jeffrey Lee told Episcopal News Service in a phone interview. Seeing this as more than an urban or rural issue, a white or black issue, a conservative or liberal issue, Lee said the bishops want to engage people on all sides of the debate in establishing common ground.

“We wanted to bring people from a variety of viewpoints around what we can agree on,” Lee said, pointing to potential areas of consensus in reasonable gun safety legislation and measures targeting illegal weapons.

Stroger Hospital’s trauma center treated 900 gunshot wounds in 2015, the latest year it tallied, and Reese said the unit treats about 10,000 children and adults a year.

Like medical care, spiritual care is needed around the clock. A typical case may involve a teenager clinging to life and family and friends dealing with their own emotional trauma and feelings of guilt, that they didn’t do more to protect the victim, Reese said. She guides victims and their loved ones as they grapple with existential questions: Why did this happen to me? What did I do to deserve this?

“At the very core of it I think it is how people make meaning of what has happened to them, particularly in the light of a traumatic event,” Reese said. “It’s really letting people explore those questions in a safe kind of environment.”

In one such case, two teenage cousins were shot and wounded in separate incidents less than a year apart, Reese said. As they were receiving outpatient treatment in the aftermath of the shootings, tragedy struck again. A house fire killed a sister of one of the boys.

“I remember talking to those boys about their coping with all of that,” Reese said. “And one of the boys said … he almost lost his faith in God because he couldn’t quite understand why all these things happened to them.”

What can a health care professional say to a boy in need of that depth of spiritual care?

“I say, I understand and we’re with you to get you through this,” Reese answered. “Because that’s where I think people of faith can make a huge difference. You may feel like God has abandoned you, but we stand with you.”

There is no easy answer to why violence has swelled recently, cautioned a University of Chicago Crime Lab report, but it noted that in the five neighborhoods with the largest increases in homicides, 37 percent of residents lived below the poverty line, compared to 23 percent citywide.

“Chicago’s homicide increase was disproportionately concentrated in neighborhoods that have historically been among the city’s most disadvantaged,” the report said.

The large majority of victims in Chicago are black men, and police Superintendent Eddie Johnson has said much of the violence is rooted in “impoverished neighborhoods.”

“You show me a man that doesn’t have hope, I’ll show you one that’s willing to pick up a gun and do anything with it,” Johnson told reporters last September after a violent Labor Day weekend. “Those are the issues that’s driving this violence.”

Reese, a Kentucky native, earned bachelor’s and master’s degrees in social work before starting her first, five-year providing pastoral care at Stroger in 1986. She returned to the trauma center at Stroger in 2005 at a time when the hospital was responding to the results of focus groups held with young men who had been treated in the trauma center. They had been asked what factors aided in their recovery.

“Almost to a person, those young men told the interviewers that the thing that helped them get through their violent injury was their faith,” said Reese, who was ordained in 2010 in a move to bring more liturgical and sacramental pieces to her work.

She’s conscious, however, that society – and the patients she typically sees – are becoming less and less religious, hence her preference for the term “spiritual care” over more religious language. Even patients without strong roots in a faith tradition grasp the underlying spiritual concepts.

She and her colleagues counsel victims and their families as individuals, but it is hard not to look at the big picture and wonder what can be done in society to stop the cycle of violence. Partly, this is an act of self-preservation, Reese said. “We get really tired of sewing people up and sending them out of here knowing that you may see them again in a year or two years or six months.”

Through their work with Healing Hurt People-Chicago, she and her team are developing ways to help these families before a crisis brings them to the trauma center. They may spend time studying data on gun violence prevention, or their approach may be as simple as a conversation with a teen about the safest way to get to school.

A few years ago, Reese was listening to a presentation by a member of the group CeaseFire, which enlists formerly incarcerated men who have turned their lives around to work with young people at risk of following the same path. The presenter said when he was young, he was always told by family members not to do all the bad things he was doing or he’d end up in jail or dead. He kept doing them anyway.

Reese asked him what would he have wanted those people in his life to tell him.

“My takeaway from that is that people need to feel loved, valued, treated with respect and know that somebody is glad that they’re here,” Reese said.

The black boys and young men she sees at the trauma center have something to offer the world, Reese said, “I just have to believe that, and that we’re so much worse off for them not being here. And that’s the message that they need to hear, I’m glad you’re here. I want to know what you bring to the world.”

And if we really are glad they are here, we need to be ready to show it in how we work to change society for the better, she said, such as ensuring equal access to quality education, addressing racial bias in incarceration rates and developing job opportunities.

“The solution seems so dauntingly complicated that it paralyzes us,” Reese said. “It just seems way too big to take on. And it is big to take on. But I think for me, as a person of faith in this setting, if I say I’m glad you’re here then it means I have to do some things to demonstrate that.”