[Episcopal Diocese of West Texas] The Rt. Rev. Robert (Bob) Hibbs died peacefully in his home surrounded by family on April 17. He was 84. 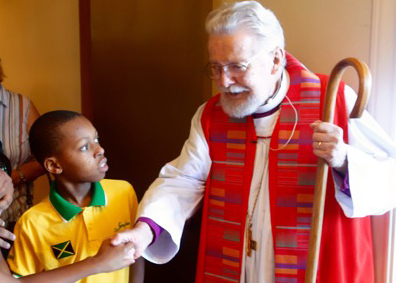 As bishop suffragan of the Episcopal Diocese of West Texas, he served alongside then-Diocesan Bishop Jim Folts until Hibbs’ retirement in December 2003.

Hibbs was ordained a priest in the Episcopal Church after graduating from General Theological Seminary. After some graduate work in Canada, Hibbs served on the faculty of St. Andrew’s Theological Seminary in Quezon City, Philippines, for 15 years as sub-dean and later dean. He then served on the faculty of the Seminary of the Southwest in Austin. For five years, Hibbs served in the Diocese of Northwest Texas as vicar of St. Peter’s, Borger, and vicar/rector of St. Stephen’s, Lubbock. In 1993 he arrived in the Diocese of West Texas and served as rector of St. Barnabas, Fredericksburg, from 1983 to 1988; and assistant rector of Church of the Good Shepherd, Corpus Christi, from 1988 to 1996.

As bishop suffragan, Hibbs’ passions included Recovery Ministries, both in the diocese and the national church, and the Cursillo movement. In his retirement, Hibbs loved to spend time reading, listening to classical music and cheering for the San Antonio Missions baseball team.

Hibbs is survived by his wife, Nancy Joane (Alexander), whom he married in 1957. Together they had three children, one of whom is deceased.

Prayers and condolences poured into the diocese as news of Hibbs’ death was shared. Many expressed their love for the “gentle man, who was a source of strength and comfort,” and for “an amazing man, who will be greatly missed.” Some shared memories of their time with Bishop Hibbs, including a time at Camp Capers, when he stood in front of the campers and in his deep voice said, “You can hear the cry of the chinchilla,” a camp joke. A shared favorite teaching by Bishop Hibbs was of “ephphatha,” whispered loudly, filling a sanctuary. Ephphatha means to “be open.”

“He was a bright star in our sky,” the Rev. Frank Fuller said. “The Lord won’t make pastors and scholars with his sense of pathos and deep humor anytime soon. 911 was one in a million.” Hibbs was number 911 in the American succession of Episcopal bishops.

The Rt. Rev. Gary Lillibridge, bishop of the diocese, said, “Simply put, Bob Hibbs was one of the finest men and clerics I have known. He mentored many, many clergy and laity and will be sorely missed for his grace, humor, and gentle humbleness, none of which impeded his direct frankness in truth telling. His extraordinary ministry reached people worldwide. I join many others in giving thanks for his life, as well as the partnership in ministry which he shared with Nancy, his wife of 59 years.”

A service will be held on April 22, at 11 a.m. at St. Mark’s, San Antonio. Clergy are invited to vest in white stoles. Memorial gifts may be made to the Diocese of West Texas Recovery Ministries or the diocese’s Cursillo Scholarship Fund.