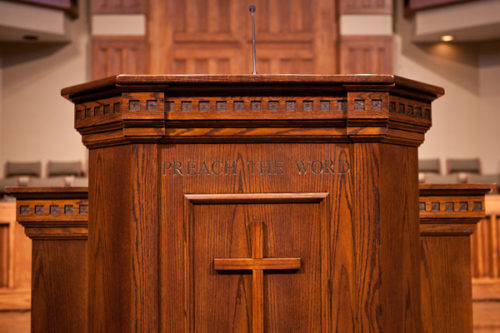 Sermons grounded in Scripture, especially the lectionary readings of the day, can be a faith community’s touchstone in times of division, say many preachers.

[Episcopal News Service] The 2016 presidential election and the Trump administration have, depending on which pundits you listen to, exposed divides not so keenly seen in the United States since the Civil War or at least since protests wracked the country during the civil rights era and the Vietnam War.

People who generally agree with the direction of the current administration frequently encounter others who decry that direction. The relentless pace of the news cycle with its one scandal or debatable decision after another can feel like a bombardment no matter one’s stance.

Living a faithful life in the midst of such divisions is not easy. On Sunday morning, members of the same congregation come to church for different reasons. Some might seek respite from the debates raging around the country. Others might be seeking guidance or inspiration for their roles in the public square. Others might be bringing more intimate worries and joys to the nave.  What is a preacher to do?

Preachers alone with their Bibles and textbooks have pondered the question and it has been the subject of small clergy gatherings, Facebook discussions and diocesan clergy gatherings, including recently in Maryland and Minnesota. 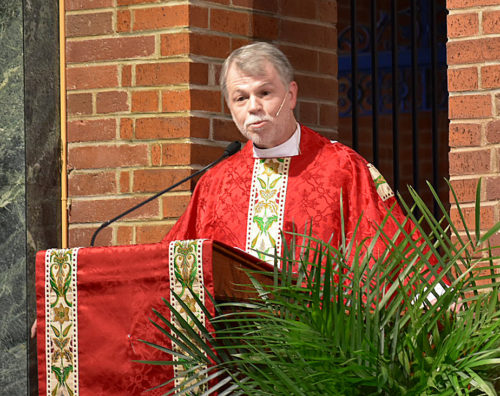 The Rev. Gary Manning, rector of Trinity Episcopal Church in Wauwatosa, Wisconsin, told Episcopal News Service, that knowing the congregation he faces is filled with all of those sorts of worshippers “tends to help me be a little more gentle,” Gentle, he said, but “not necessarily pulling punches.”

Admitting to a tension most preachers feel at one time or another, Manning said, “Quite frankly sometimes I just want to get up and wail away, and I think for whose benefit is that? Is that just because I’ve got the pulpit and I can do that? Well, that’s not what I am called to do; get up and give voice to my own frustration.”

The Rev. Bernard J. Owens, rector of St. Andrew’s Episcopal Church in Greensboro, North Carolina, agreed. “The most pastoral and prophetic thing we can do is speak honestly and truthfully,” he said in an interview with ENS. “And I don’t entirely mean we need to be the prophet Amos every Sunday but rather to be authentic” and grounded in the truth of Scripture.

Owens recently tried to debunk the notion that a sermon is “the moment in which a designated holy person tells us everything we need to know.” In “The Light of the World: Writing my first sermon for the age of Trump,” an opinion piece he wrote for the online magazine Slate, Owens wrote that preaching must be rooted in study, prayer and relationships.

“A sermon is only one piece of the many-layered, lifelong process of building a community,” he wrote. “Even the most challenging events can also serve as opportunities to strengthen that community, but that requires equal measures of courage and humility.” 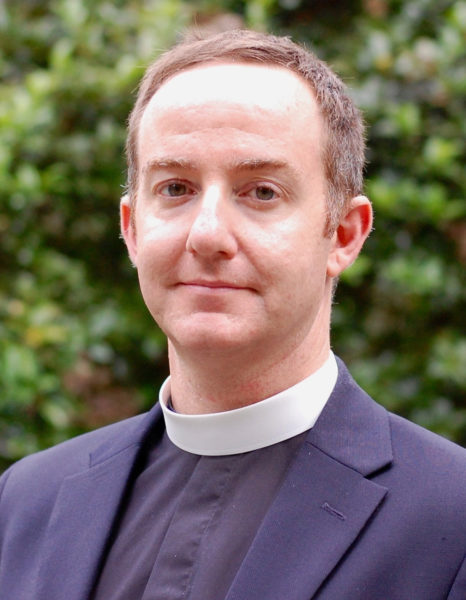 The Rev. Bernard J. Owens, rector of St. Andrew’s Episcopal Church, Greensboro, North Carolina, says that simply preaching about discord in politics is not what is called for. Photo courtesy of Bernard J. Owens

Owens feels called to “build up a more sacred and loving community that really does include everyone within the congregation.” At the same time, he knows that “if we aren’t honoring that there’s some really upsetting things happening then we’re just ignoring it” and being inauthentic.

Yet, it is a balancing act, he said. To preach only about current events can degrade the relationships a preacher has forged in a congregation. It also contributes to the sense of exhaustion many people on both sides of the communion rail feel about keeping track of all the issues and their responses. Moreover, such preaching can simply affirm the fact that people are divided.

Manning said it is one thing to show how the gospel critiques the latest political decision or policy. “It’s another thing to ask how are we as gospel people to embody our lives now. How are we to enact gospel witness?”

Two preachers who teach the art of homiletics in Episcopal seminaries would agree.

In the face of what she called “a huge energy asking us to be reactive,” the Rev. Linda Clader said, “my advice to preachers, and to myself, is to take a big breath and back up a step and really remember that our job is to preach the gospel.” 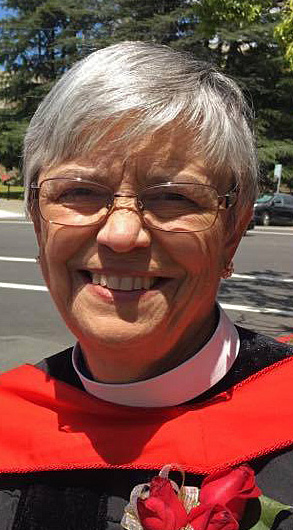 Clader, who is professor emerita of homiletics at Church Divinity School of the Pacific, told ENS that preachers must be diligent about starting with the readings for the day. “That doesn’t mean that you aren’t going to respond to something that is crazy enough but our job is to build community, to build a Christian community and it’s a community that’s grounded in the gospel,” she said.

However, Clader said, preachers should not fall into the trap of pitting in their sermons what Donald Trump says against what Jesus says. Instead, preachers have to cast a larger vision of “justice, forgiveness and God’s love.”

Grounding their sermons in that gospel message gives preachers authority, she said. “That’s the platform of authority that you can stand on because you have studied it and studied it, and you do know something about what it says and what it means,” she said.

The Rev. Ruthanna Hooke, associate professor of homiletics at Virginia Theological Seminary, said it is easy for preachers to misuse the pulpit as their personal platforms. “So, Scripture becomes a kind of grounding that you have to keep submitting yourself to – to the claims of the text – so that you are staying in contact with God as the source of preaching.”

Clader and Hooke both said that the text, in Hooke’s words, is a crucial touchstone. “But, having said that, the text pushes us into some pretty uncomfortable places,” Hooke added.

The difference, in Manning’s words, it that “the gospel is inherently political but not American-partisan political.”

Manning said he believes what he is called to do is to remind people that “it is our theology and our baptismal convent that forms our understanding of the world and not the other way around, and that’s hard for people because they’re exposed to the American story all week and maybe the gospel story for an hour.”

The gospel, Hooke said, is indeed political in its implications and its applications, and the preacher’s challenge is to explicate it in a way that is “universally hear-able while at the same the time is really the gospel.” 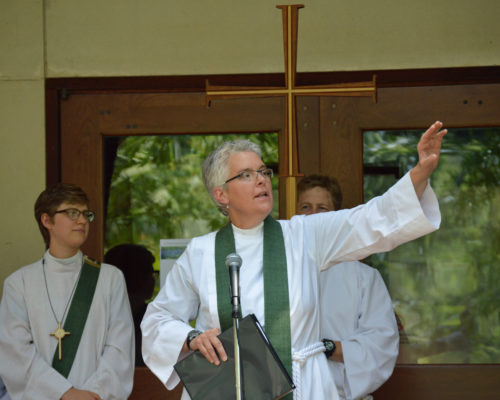 Hooke teaches her students that if they are going to preach a “political sermon,” they “really have to implicate themselves.” Preachers have to ask if they would do what they are asking of their listeners. “That’s an important measure of humility on the part of the preacher and helps with these very divisive questions,” she said, adding that outrage not followed by action does not lend itself to helping the community find solutions.

It helps, she said, to remember that any given sermon is part of the preacher’s relationship with the community. “If people really know that you care about them, they’ll be much more likely to listen to you say things that are challenging,” she said.

Diocese of Maryland Bishop Eugene Sutton harkened to that care in a February pastoral letter. He urged preachers, among other things, to witness to the gospel and acknowledge that there are other witnesses. Remind your listeners, he said, that you want to keep talking with them, and then show a willingness to listen, change your mind and repent if needed.

“Show some courage,” Sutton said. “It’s easier in the long run for your pastoral ministry than cowardice.”

The bishop asked listeners to show the same willingness to listen, change one’s mind and repent, but also to study the Sunday readings and acknowledge Jesus as “both a spiritual and a political teacher.”

“Cut your preachers some slack,” Sutton said. “They really are trying to say and do the right thing.”

And, Manning noted, they are doing it during the 12 or so minutes that most Episcopal preachers devote to the sermon.

Hooke reminded preachers that the pulpit might not always be the best place from which to dive deeply into the issues of the day because the sermon is a monologue, not truly a conversation. It might be better, she said, to open up an issue while preaching and then host conversations at other times. The church, Manning and Hooke said, can be hospitable to difficult conversations among people with opposing viewpoints. Churches might be becoming one of the few places where non-like-minded people can gather for conversation, Hooke said. 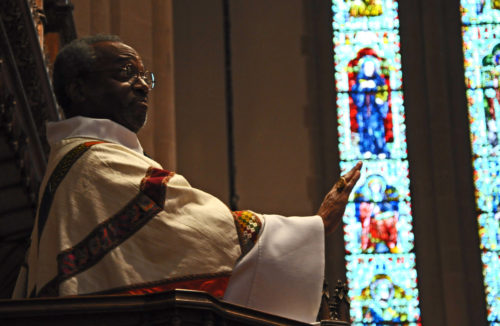 Whether it is in the pulpit or during an adult education forum, the first step ought to be acknowledging that the divisions in the wider world exist within in a congregation. “It can be pastorally helpful to actually talk about something that everybody’s thinking about but afraid to voice,” Presiding Bishop Michael Curry said during a recent news conference when a reporter asked him about the challenges of preaching to and leading congregations during this season of division.

The next question, Curry said, is “how do you move forward and offer a word and help people navigate a context that is complex – morally complex?”

As a parish priest and then as bishop of North Carolina, Curry said, he learned that calling people to stand on common ground helped give everyone some navigational tools.

“I approached that by trying to first attempt to identify and articulate what are the core values reflected in the teachings of Jesus of Nazareth, that we as followers of Jesus, as Christians, believe,” he said.

“Claiming the space of the values and teachings of Jesus does not mean that we have all the answers to how to solve either the problem or the issue,” he warned. Rather, it means claiming the common ground at least for Christians and looking for people of other religious traditions and people with no religious traditions who nevertheless hold the same values.

That approach allows for the fact that “everybody’s got something to contribute and we’ll come out with something better when we do that.”

Curry gave some examples. How, he asked, might a study of the parable of the Good Samaritan inform the health-care debate? Christians know of Jesus’ so-called Golden Rule in Matthew 7:12 in which he tells his followers to do to others as they would have others do to them. “Now, if you are a legislator, you have to ask yourself the social policy question of is this decision something I would want somebody else to do to me,” Curry said.

“To love your neighbor as yourself means not only to love the person whom the legislation was trying to help but it’s also about loving the person who disagrees with you,” he said. Republicans and Democrats must see each as neighbors, as defined by Jesus, “if you want to be a Christian,” he said.

(Episcopalians can engage in policy discussions and advocacy at the federal level, and in some cases state level, by joining the Episcopal Public Policy Network.)