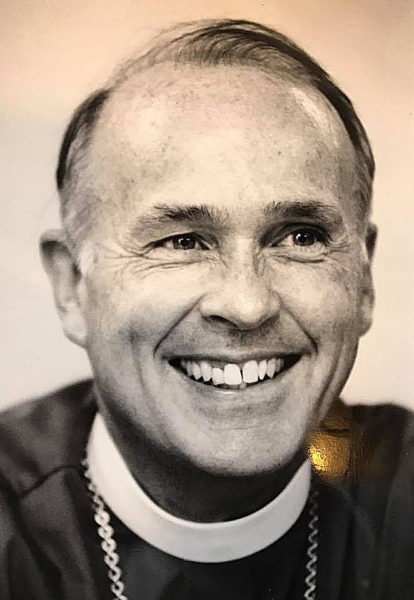 The clergy of the Diocese of Los Angeles learned of Borsch’s death as they gathered for the annual Holy Tuesday renewal of vows at the Cathedral Center on April 11.

Educated at Princeton, Oxford and the General Theological Seminary, his doctorate in New Testament studies was from the University of Birmingham in England, according to an announcement from St. Edmund’s Episcopal Church in San Marino. He held teaching posts in England, at Seabury-Western Seminary, and at General Theological Seminary prior to becoming dean and president of the Church Divinity School of the Pacific in Berkeley, where he served from 1972 until 1981. That year he became dean of the chapel and religious life at Princeton University. Borsch remained at Princeton until his 1988 election as bishop.

Borsch returned to academics after leaving the Diocese of Los Angeles, serving as professor of New Testament and chair of Anglican studies at Lutheran Theological Seminary at Philadelphia. The seminary honored him in 2014 by instituting the Frederick Houk Borsch Chair in Anglican Studies.

Contributor of essays, articles and poetry to a number of journals and newspapers, Borsch was the author or editor of some 20 books. A bibliography, along with more biographical information, is available here. The Diocese of Los Angeles’ remembrance of Borsch is here.

An April 22 memorial service (time pending as of April 13) is planned for St. Martin’s Episcopal Church, Philadelphia,  and another service will be held at a later date at St. Augustine by-the-Sea Episcopal Church, Santa Monica, California.

A 47-minute interview with Borsch in 2014 about his life and work is below.