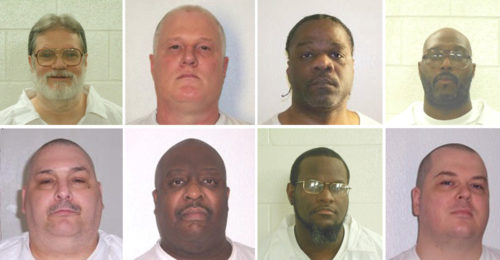 Trinity Episcopal Cathedral in Little Rock, Arkansas, is scheduled to hold a special prayer service at 8 p.m. on Easter Sunday, the eve of an 11-day period of planned executions, for seven of the state’s death-row inmates, for their victims and families and for the executioners.

“The cathedral will hold services if we reach the point when there is nothing left to do but pray,” said the Very Rev. Christoph Keller III, dean and rector, in an email message to Episcopal News Service. “Then we will pray for the men who are about to die, and those who love them; and for those who died and suffered in the crimes for which they have been convicted, and those who love them.”

Death penalty opponents have held daily demonstrations outside the governor’s mansion since the executions were announced in March. On April 12, clergy planned to hand deliver a letter signed by more than 200 clergy from across Arkansas to Gov. Asa Hutchison urging him to show mercy.

Two of the seven men are scheduled to die by lethal injection on Easter Monday, April 17, two more on April 20, another two on the 24, and one on April 27; the final execution is scheduled three days before the expiration date of the execution sedative midazolam. One hour before the scheduled executions, the cathedral will host a brief ecumenical service followed by a short walk to the Arkansas governor’s mansion for a candlelight vigil.

The state’s decision to execute an unprecedented number of inmates in quick succession and with controversial lethal injections has drawn international criticism, spawned lawsuits arguing the quick succession of executions raises the risk the inmates’ death will be “cruel and unusual,” and put Arkansas and its governor at the center of the nation’s death penalty debate.

Hutchinson, who set the execution dates, admitted to feeling “uneasy” about the need to schedule the executions in quick succession in advance of the sedative’s expiration date. (Drug companies, like Pfizer, have begun to impose controls over drugs they manufacture to ensure they are not used in lethal injections.)

The state originally had planned to execute eight inmates, but a federal judge last week stayed the execution of one of the men. All eight death-row inmates were convicted of murder between 1989 and 1999.

“The death penalty is driven by revenge – not justice,” said the Rev. Allison Liles, executive director of Episcopal Peace Fellowship, in a late March press release condemning the executions. “And a high price of this vengeful punishment is being paid by the prison workers forced to endure the reality of what it means to execute a human being.”

Arkansas hasn’t executed a prisoner in 12 years; when the governor scheduled the eight executions it came “out of the blue,” said Caroline Stevenson, a member of St. Michael’s Episcopal Church in Little Rock and a member of the Episcopal Peace Fellowship.

The ongoing protests outside the governor’s mansion indicate citizens’ outrage and “give them a way to try and influence the governor,” said Stevenson, in a phone call with ENS. “Is he moveable? Not that we can tell.”

The governor says he is carrying out the law, said the Rev. Mary Janet Murray, a retired deacon and a member of St. Michael’s and the EPF.

“He claims ‘it’s the law and if you want to change the law, you have to talk the legislature into doing that,’” said Murray, also in a phone call with ENS.

Stevenson is also a longtime member of the Arkansas Coalition Against the Death Penalty, which was formed in 1976 when the U.S. Supreme Court reinstated the death penalty. (In 1972, the court had ruled the death penalty “cruel and unusual” punishment and in violation of the Eighth and 14th amendments.) She is also a member of Murder Victims’ Families for Reconciliation, which also advocates for ending the death penalty.

It’s a mistake, said Stevenson, to conflate justice and revenge and to think that executions will bring closure to the healing process for victims’ families.

“Executions don’t bring the kind of solace that people think will bring to families, it compounds the violence,” said Stevenson, whose college-age son, then a student at Syracuse University, was killed in the December 1998 terrorist bombing of Pan Am Flight 103 over Lockerbie, Scotland.

Arkansas Bishop Larry Benfield called the unprecedented number of executions “at very least a discordant note to strike in a state that reports higher-than-average belief in God and church attendance.”

He went on to ask: “Are these planned executions where the teachings of the church have taken Arkansans? Or have the people of this state and their leaders chosen to ignore the very religious principles they proclaim?” Benfield has joined other Arkansas faith leaders in speaking against the executions.

Sixty-one percent of Arkansas residents expressed support for the death penalty in a recent poll. And the state ranks fifth among the most highly religious U.S. states the Pew Research Center’s 2016 religious landscape study.

“The bigger question to me is how can you be a Christian and support violence of so many kinds,” said Stevenson when asked how Arkansans square the Christian beliefs with support for the death penalty. She cited the elimination of programs that feed children, a federal budget that promotes military spending and weapons of mass destruction. “The bigger question for me is how do we square our following of Jesus with violence?

In 2015, the General Convention of the Episcopal Church reaffirmed its longstanding call to end the death penalty. Thirty-one U.S. states allow the death penalty; Arkansas has executed 27 people since 1976.