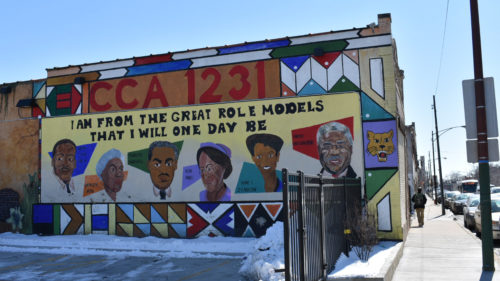 [Episcopal News Service – Chicago, Illinois] At Community Christian Alternative Academy, in one of Chicago’s most violent neighborhoods, the dead are still remembered a generation later in bold, black paint.

Snake. Pookie. Johnny Rae. Malek. There are others – their names and the years when they died are affixed to two-dimensional tombstones under the letters “RIP” in the outdoor mural that towers over the school’s entrance on South Pulaski Road in North Lawndale on the city’s west side. Because the artwork hasn’t been updated since its creation, these deaths run from 1989 through 1994. 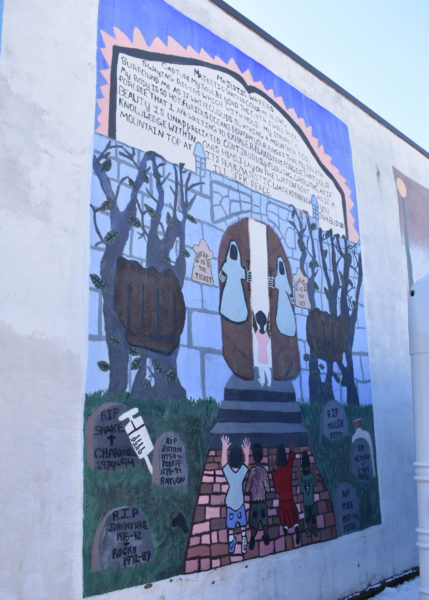 A mural from the late 1980s and early 1990s that overlooks CCA Academy’s entrance remembers students and relatives of students killed by drugs and gunfire a generation ago. Photo: David Paulsen/Episcopal News Service

“It was a way that the students were expressing their grief,” school founder Myra Sampson said in an interview with Episcopal News Service. “Some of those ‘resting in peace’ were students, and some were family members of students, but it was a way for remembering people they had lost.”

The mural is a product of a former era whose violence is not easily forgotten. The murder rates in the early ’90s often are cited as a bleak reference point when tallying Chicago’s recent surge in gun violence and homicides. Last year, 34 people were killed just in North Lawndale, according to Chicago Tribune reporting, and Chicago’s citywide toll rose to 786 in 2016, the most of any city in America. The deadly trend has continued in 2017. The year’s homicide total had hit 155 as of April 7, according to records kept by DNA Info.

Chicago, though not alone in facing such grim statistics, is the setting for a conference hosted by a group of Episcopal bishops who see behind the violence an “unholy trinity” of guns, poverty and racism. Bishops United Against Gun Violence’s conference will be held at the Lutheran School of Theology from April 20 to 22 in Hyde Park.

The conference aims to illuminate the problems at the intersection of guns, poverty and racism but also bring a Christian message of hope and reconciliation, the bishops say.

“Chicago has been the focus of much of the country’s attention on issues of urban gun violence, so it’s my hope that this conference makes a contribution to the creation of effective responses to this epidemic,” Diocese of Chicago Bishop Jeffrey Lee said in an email message. “One of the vows a bishop makes at his or her ordination is ‘to defend those who have no helper,’ in the name of Jesus Christ. I can think of few issues more compelling than this one to make good on that vow.”

“Our students see so much death and a lot of time don’t have anyone to help them process that,” Sampson said.

The nondenominational charter school, which specializes in helping dropouts earn their high school diplomas, has had a partner in St. Mary’s Episcopal Church since the school opened in 1978. A former rector was friends with Sampson, and early on, the congregation in suburban Park Ridge helped the school fill out paperwork, gave $1,000 to create the school’s reading lab and secured the down payment for its current building through a $30,000 United Thank Offering grant from the Episcopal Church.

More recently, the church formed a group of a dozen tutors who take turns traveling to the school once a week and providing students one-on-one help with their homework. Such individual attention, Sampson said, may prove critical in helping these 200 or so students, ages 16 to 21, grow into adults who can beat the cycle of violence in their neighborhood.

The gravity of the challenge is written on the wall: The victims memorialized in the school’s mural – the youngest, 15, the oldest, 21 – were the same age as students who now pass by on their way inside each day. 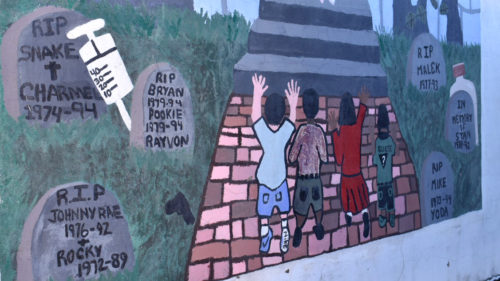 This closeup of the mural memorializing victims of violence shows the years of their deaths date from 1989 to 1994. Photo: David Paulsen/Episcopal News Service

Park Ridge is in many ways worlds apart from North Lawndale. Residents in this northwest suburb live in modest, well-kept houses with yard signs supporting candidates for alderman, school board and parks board. During the week, they typically commute to work at office jobs in Chicago or run their own businesses in Park Ridge, said the Rev. Patrick Skutch, St. Mary’s rector of two years. 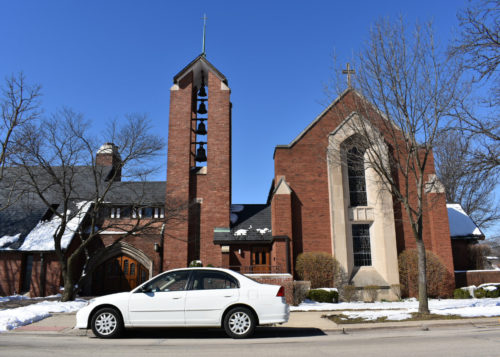 St. Mary’s Episcopal Church in Park Ridge, Illinois, is seen in March. The church has a longtime partnership with CCA Academy about a half hour away in Chicago. Photo: David Paulsen/Episcopal News Service

His congregation is diverse in age, Skutch said, but mostly white. It also is active in the community, for example, organizing a monthly Second Sunday Sack Lunches drive to pack meals for the hungry.

“People here really have a passion for serving others,” Skutch said.

“The first year it was kind of an experiment. We weren’t even sure what we were going to do,” Kondiles said.

Now in its third year, the program has become a valued part of the CCA Academy routine. Every Tuesday, five of the tutors from St. Mary’s, most of them women, spend four hours at CCA Academy, tutoring one group of students in the morning and a second group in the afternoon.

Sampson, who serves as the school’s chief education officer, said the emphasis typically is on seniors who need the extra push to graduate, and students appreciate the tutors’ help.

“A lot of our students are academically behind, and so sometimes the only way you can grasp a concept and move forward is if someone has some time to spend with you so that you can learn that concept,” she said.

Kondiles, a 64-year-old Skokie resident, said the tutors may get just as much out of the sessions, witnessing the students grow in their education. The tutors see themselves as delivering tools that will help these students rise out of poverty.

“I call it the education brigade,” Kondiles said. “That’s the great leveler.”

In even the best traffic conditions, it takes about a half hour to drive from St. Mary’s in Park Ridge down I-294 and the Eisenhower Expressway to CCA Academy. The streets of North Lawndale pass in front of apartment buildings, auto body shops, liquor stores and retail centers, where the bright lights of stores contrast with the side streets’ duplexes, some of them displaying boarded-up windows.

The neighborhood once was home to the Sears, Roebuck & Co. headquarters, as well as Zenith, Sunbeam and Western Electric. Then in the 1950s, “white flight” was coupled with a surge in black residents, and riots in 1968 over the assassination of the Rev. Martin Luther King Jr. were followed by years of decline and industries closing, according to the Steans Family Foundation. Now, 21 percent of North Lawndale’s working-age population is unemployed, 43 percent of households live in poverty and nearly 28 percent of residents do not have a high school diploma, the Tribune reported. 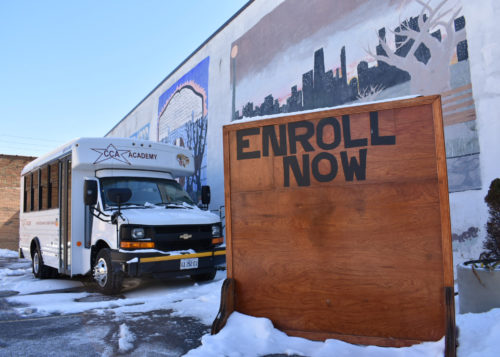 CCA Academy has been a fixture of the neighborhood for all the school’s 39 years. It serves as something of a sanctuary, in a building reclaimed from the neighborhood’s industrial past. The school fills more than 18,000 square feet of a former bottle cap factory, a building that today would be unrecognizable as a school if it weren’t wrapped in telltale murals and signs, including a moveable placard encouraging potential students to “Enroll Now.”

The school grounds have been free of violence, Sampson said, but death surrounds. She estimates three or four of her students each month grapple with the sudden death of a relative or friend, typically a casualty of gunfire. And those who escape danger still may be traumatized by the violence they witness on the streets.

Students don’t readily share such experiences with their tutors from St. Mary’s, and the lesson-minded tutors don’t want to pry. Their presence in these students’ lives often speaks for itself, as in the aftermath of the killing last year of a CCA Academy student by Chicago police, a high-profile incident that shone a dim spotlight on North Lawndale.

The student, 16-year-old Pierre Loury, reportedly was fleeing police at a traffic stop when he was shot by an officer on April 11, 2016, a Monday. Police said Loury had threatened the officer with a gun. The killing sparked criticisms of the force and demonstrations by Loury’s family members and their supporters.

The tutors from St. Mary’s learned of the tension in North Lawndale from a school administrator in a phone call Monday night. Should the tutors still come Tuesday? Yes, certainly, was the response. The school wanted to keep a sense of normalcy, Kondiles said.

When they arrived Tuesday morning, “the atmosphere was pretty electric,” said Paula Risk, 69, a retired nurse and fellow tutor. Some students were working through their feelings by making posters in memory of their slain fellow student, who was to be remembered at a vigil that night.

The drive back to Park Ridge on a day like that can feel like going through decompression, Risk said, but they also see hope to balance the tragedy. The tutors are committed to these students.

“We’re called as Christians to help other people, so you help how you can,” Kondiles said.

The problem of gun violence is bigger than one school or one church, even one city. Chicago has unfortunate company in places like St. Louis, which some have called the country’s real murder capital because it has the highest per capita homicide rate. And a Wall Street Journal analysis in February identified Chicago, Baltimore, Milwaukee and Memphis as the four large American cities that have seen homicide totals approach or break records set in the 1990s.

Poverty, racism and violence are “an insidious trinity of evil forces,” Diocese of Maryland Bishop Eugene Taylor Sutton said. Taylor is one of the conveners of the upcoming Bishops United conference and coined the phrase “unholy trinity.”

Chicago has the additional burden of becoming a presidential punching bag. After lamenting generally about crime and poverty as “this American carnage” in his inaugural address, President Donald Trump days later singled out Chicago’s violence for scrutiny, warning he would “send in the Feds” if the city doesn’t solve the problem itself.

Skutch, the rector at St. Mary’s, thinks Trump’s reaction belies the complexity of the issue. “A lot of our cities in America struggle with the same reality,” he said. “It’s one thing to stand outside it and criticize it. It’s another thing to be in it.”

And while gun violence doesn’t plague Park Ridge residents, “our neighbors’ children deal with that on a daily basis,” Skutch said, so his congregation is reaching out any way it can.

Outside support is welcomed in North Lawndale, where children often don’t have the same extended family and institutional support that past generations may have relied on, Sampson said. With help from St. Mary’s, students at CCA Academy typically graduate at a rate of 90 percent or higher.

Sampson sees more in that achievement that a piece of paper to hang on the wall.

“We have young people in Chicago who are 20 and 21 who have not had a job,” she said. “When adults integrate as contributing members of society … we consider that a success.”

North Lawndale is a tough neighborhood, but she also sees hope and perseverance.