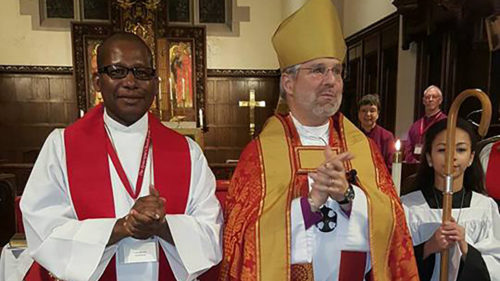 The Rev. Charles Kamano, left, stands next to Diocese of Connecticut Bishop Ian Douglas at Kamano’s service of reception as an Episcopal priest on March 16 at Church of the Holy Spirit in West Haven. Photo: Kamano, via Facebook.

When he was received this month by Bishop Ian Douglas as the newest priest in the Diocese of Connecticut, the ceremony was the culmination for Kamano of a long and tumultuous spiritual journey that began thousands of miles away in his native West Africa, where he was raised Muslim and converted to Roman Catholicism as a teenager.

Kamano, despite his father’s harsh disapproval, was so committed to his newfound faith that he was ordained as a Roman Catholic priest. He studied in Rome on a church scholarship but gradually became disenchanted with the church’s hierarchy and left it, immigrating to the United States to start a new life – and a search for a new faith home.

He found the latter in Church of the Holy Spirit, an Episcopal church in West Haven, Connecticut, and after more than six years serving the church and the surrounding community, he was welcomed as an Episcopal priest on March 16 in a service of reception, rather than ordination, since the Episcopal Church accepted his ordination as a Catholic priest.

“It was like the brightest day of my life,” Kamano, 45, told the Episcopal News Service in a phone interview.

Kamano works part time as chaplain at Yale-New Haven Hospital and recently began pursuing a master’s degree in social work at Southern Connecticut State University. He feels fortunate, he said, to find his calling in the Episcopal Church and is looking forward to serving wherever he is needed.

“He’s a very loving, highly intelligent grounded Christian leader,” Douglas said by phone, adding that Kamano is “really inhabiting the Anglican way of being a Christian. … He appreciates a sense of shared authority while being a church that is episcopally led.”

As a boy growing up in Sierra Leone, his religious routine involved going with his family to their mosque, praying in Arabic and fasting regularly. His father practiced the austere Wahhabi form of Islam, which is dominant in Saudi Arabia and influences that country’s laws demanding strict religious adherence. Wahhabism also has been linked to the rise of extremist groups in the Middle East, notably the group known as Islamic State, or ISIS.

At age 6, he begged his father to let him attend a local Catholic school where some of his friends went, and surprisingly, his father agreed, after hearing from other parents that a good education would give his son professional advantages as an adult.

Along with his education, though, he was developing an appreciation for the faith of the nuns and priests who were his teachers.

“The more I grew … I was contrasting the worldview of the Christian way of living to that of the Muslim worldview,” Kamano said. He saw Christian values as universal values, like showing charity, loving your neighbor, doing no harm or violence. While Muslims in more tolerant sects also emphasize love and charity, his father’s worldview, in Kamano’s eyes, was strict and demanding.

When he decided at age 16 to take catechism classes to convert to Catholicism, he had to do so in secret. None of his family members attended his baptism, and he said his father even threatened to kill him when he made known his desire to attend seminary.

Fearing for his safety, he fled to his parents’ native Guinea with help from his mother. After seven years of seminary studies there and in Mali, he was ordained in 2001 and assigned to two Catholic parishes in Guinea. He later studied in Rome on a church scholarship.

As the years passed, Kamano began to question the rigid hierarchy of the Catholic Church and some of its teachings. Some of its top-down mandates, such as priest celibacy, seemed to him out of touch with the daily lives of Christians.

“Why can’t you live up to a vocation as you are, as God wanted you to be?” Kamano asked himself.

In 2009, when Kamano expressed his reservations to his bishop in Rome he lost his scholarship. Later he found himself at a spiritual crossroads and in early 2010 resigned from his service in the Catholic Church.

Unable to return to Sierra Leone for fear of religious persecution, Kamano decided to resettle in Connecticut, where in 2008 he had served an internship in the Archdiocese of Hartford. When he first attended Church of the Holy Spirit in West Haven, he didn’t count on the warm welcome from the Rev. Lisa Hahneman.

“He pretty much hoped to sneak in and sneak out,” Hahneman, Holy Spirit’s rector, told Episcopal News Service. “And as I like to say, I beat him to the back door.”

She greeted him on his way out and learned that he was a Catholic priest looking for an Episcopal congregation.

“I was fascinated,” she said. He told her more of his background when they met later that week, and she began working with him to develop the process by which he eventually was received as a priest in the church.

Kamano became a reader during Sunday services at Church of the Holy Spirit. He ministered to French-speaking West Africans in the area. And he accompanied Hahneman to church services for the Haitian community in nearby Bridgeport, where Hahneman handled liturgical duties and Kamano delivered sermons in French.

“I came to deeply respect his journey and the depth of his spirituality,” Hahneman said.

Now as an Episcopal priest, more doors may be opening for Kamano in the diocese, which always has congregations in need of priests. Kamano said he feels humbly blessed.

“I have always loved the priesthood,” he said. “I know how privileged I am to be called by God – even though I am nothing, I am human.”