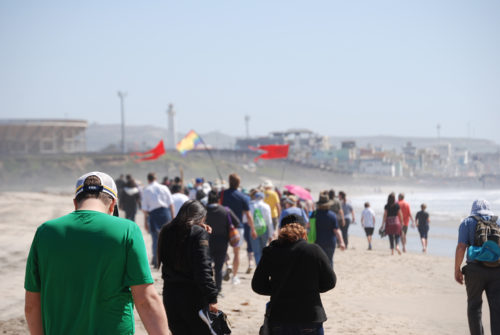 Participants from the Episcopal dioceses of Los Angeles and San Diego and the Anglican Diocese of Western Mexico march toward the Tijuana border along the California coast. Photo: Greg Tuttle

[Diocese of San Diego] Some traveled from Los Angeles and Orange County. Others from San Diego and Mexico joined in. Everyone who felt “called to the wall” by the Episcopal dioceses of Los Angeles and San Diego and the Anglican Diocese of Western Mexico, met in the afternoon of April 1, at the parking lot of Border Field State Park, the most southwest corner of the continental United States where the high border fence between Tijuana, Mexico, and the United States stretches out into the Pacific Ocean.

In this place of horse stables, green beach grass and flowers, and sandy shores for picnics and paths for hiking, people of faith walked a mile-and-a-half south for a shared Eucharist with the Anglican Church of Mexico on two sides of the high border fence at Playas de Tijuana Seccion Terrazas. The mission: to celebrate a Eucharist in support of immigrants, and to raise awareness about their plight and the need for immigration reform.

The crowd of about 75 people walked and sang hymns in Spanish and English on the U.S. side of the border led by guitar and drum accompaniment. Some carried crosses and red banners. They stopped at the water’s edge to complete the last four Stations of the Cross (Via Crucis) which had begun early in the morning in Echo Park, in central Los Angeles, and had continued at the lunch break at St. Philip’s Episcopal Church in Lemon Grove in the greater San Diego area.

Los Angeles Bishop Suffragan Diane Jardin Bruce led the Eucharist on the U.S. side of the border. The Rev. Guy Leemhuis, a deacon in the Diocese of Los Angeles serving Holy Faith Episcopal Church, led the music and liturgy in Spanish and English. The Rev. Colin Mathewson, co-vicar of St. Luke’s in San Diego, shepherded a group from the Diocese of San Diego to the Mexican side of the border for the binational Eucharist. Western Mexico Bishop Lino Rodriguez Amaro celebrated and presided on the Mexican side where about 60 people gathered, and where a mariachi band provided accompaniment.

“We worshipped together, we prayed, we broke bread and we sang, all through the border fence,” said Bruce. “It was an act of solidarity and an act of healing and proclamation that Jesus Christ is alive and working among us to bring peace and transformation to our families, to our communities, to our nation and to the world.”

The Eucharist alternated in Spanish and English from the Mexican side to the U.S. side, with music, passing of the peace and conversation through the border fence at Friendship Circle, a meeting place between two nations.

“Via Crucis is an important way for people to name the fact that our immigration system is broken,” said the Rev. Colin Mathewson, co-vicar of St. Luke’s in San Diego. “Families are being torn apart. Undocumented immigrants who desperately want to embrace the full responsibilities of living in America are prevented from doing so while business owners exploit them. We need immigration reform, and this Eucharist is one way we bring attention to the fact that God’s love does not recognize human boundaries. God’s love transcends all boundaries, for we are all one in Christ.” 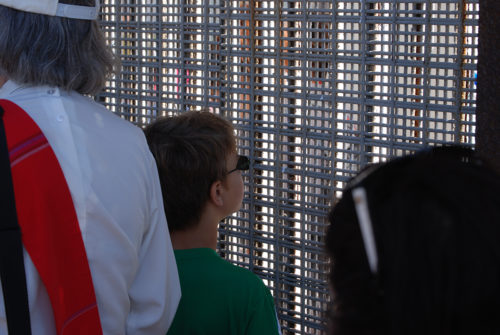 A boy looks through the border fence from San Diego to the Tijuana side. Photo: Greg Tuttle

In spite of a high border fence at a park where no pedestrian access across the border is allowed, people meet and converse from 10 a.m. to 2 p.m. every Saturday and Sunday, Roman Catholic services are held every Sunday afternoon at Friendship Circle, according to a U.S. border guard.

A nearby mesa affords picnic tables and drinking fountains on the U.S. side. The Mexican side is a busy beach community of homes and businesses. A few miles east of the binational Eucharist is the busiest border crossing in the world.

The San Ysidro border crossing between San Diego and Tijuana is one of three in the county. It is open 24 hours a day, 365 days a year. Annually 13.9 million vehicles and 6.9 million pedestrians cross legally. This largest legal opening in the wall is a smart border with modern SENRTI lanes and pre-approved passes.

Further to the east of the San Ysidro crossing is Otay Mesa where many pedestrians cross from the U.S. on a walkway to Tijuana’s Brown Airport for flights to Mexico City or Guadalajara for business or vacations. Likewise, many Mexican families fly from Brown Field for vacation and family time in Los Angeles and San Diego.

San Diego and Tijuana are often considered a regional community, not a borderline of two countries because the border areas provide access to work and recreation by neighbors who share business, real estate and family interests in two countries.

The first border fence in the 1950s was made of barbed wire. In 1989, construction of a new layer of fencing was made from surplus helicopter landing pads turned on their sides.  It stretched 46 miles, rising to heights of six to 10 feet. In 1996, a second layer of fencing 13 miles long and 15-18 feet high was added. A third layer that stretches into the ocean at Border Field State Park was added later.

A group of over 20 came for the border Eucharist from Iglesia de La Magdalena Episcopal Church of Glendale led by the Rev. Roberto Martinez. Another group came from St. Paul’s Cathedral in San Diego, and members of Mary Magdalene Apostle Catholic Community of Serra Mesa, shared the border walk with their new pastor, Kori Pacyniak.  Also, Fr. John Goldingay from Fuller Theological Seminary and St. Barnabas, Pasadena, joined the event for the first time.

The Rev. Canon John Taylor, bishop-elect of the Diocese of Los Angeles, brought parishioners from St. John’s Chrysostom in Rancho Marguerita. After the Eucharist, Taylor gave small olivewood crosses from the holy land to the U.S. border guards. The guards were friendly and one of them, a former Marine and father of five children, expressed appreciation for the cross because he is a chaplain for the guards. He is the pastor of a Wesleyan Church who said he enjoys the opportunity to serve at the border wall in a meaningful way.