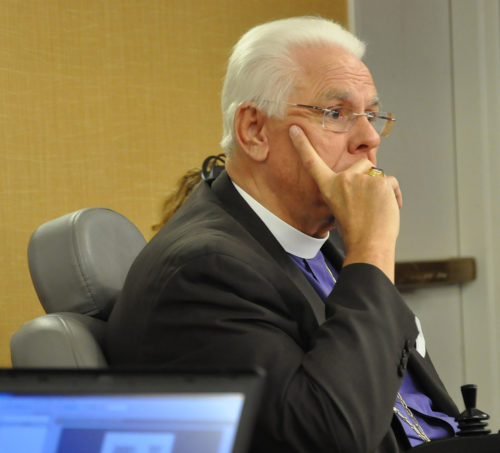 Church Attorney Raymond “Jerry” Coughlan, appointed to represent the Episcopal Church, and Diocese of Los Angeles Chancellor Richard Zevnik did not make oral closing statements. They will submit written briefs for the Hearing Panel to consider before making its decision.

“I have no idea how long our decision will take but there are other canonical processes involved that could mean this could go on for a while,” Diocese of Southern Virginia Bishop Herman Hollerith IV, president of the Hearing Panel, told spectators at the end of the session. “This is not going to be something that is going to happen before Easter.”

The allegations detailed at the hearing stem from Bruno’s behavior during and after his unsuccessful 2015 attempt to sell St. James the Great Episcopal Church in Newport Beach to a condominium developer for $15 million. Members of the church initially filed the disciplinary complaint against him. 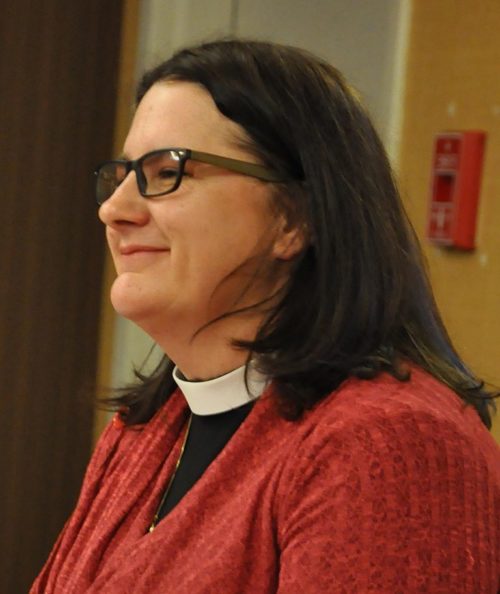 The Rev. Canon Kelli-Grace Kurtz, convening chair of Los Angeles’ program group on missions, discusses with the Hearing Panel what the diocese requires of those congregations. She said the group classified St. James as a “mission station” and thus it had to comply with certain reporting requirements. The Rev. Canon Cindy Evans Voorhees, St. James’ vicar, had testified that she reported verbally to Bruno and did not think she needed to submit those reports. Photo: Mary Frances Schjonberg/Episcopal News Service

Bruno said in his response brief to the Hearing Panel that five of the allegations must be decided in his favor because “undisputed evidence establishes no canonical violation.” He said the sixth allegation concerning alleged misrepresentations to Voorhees presents conflicting evidence for the panel to weigh. However, he called it a “she said (he told me he wouldn’t sell the property), he said (I never said I wouldn’t sell the property) dichotomy.”

The Hearing Panel has a number of actions it can take, ranging from dismissal of the allegations to removing Bruno from his ordained ministry. Bruno or Coughlan would have 40 days to appeal the Hearing Panel’s decision to the Court of Review for Bishops.

March 30 began with Bruno spending nearly two hours answering questions from Coughlan and Zevnik about his March 28 testimony. The questions ranged over a number of topics aimed at understanding the bishop’s actions surrounding his attempt to sell St. James the Great, and his motivations for those actions. High on the list of motivations was providing money to fund the ongoing mission and ministry of the diocese.

Money was an issue, Bruno and other witnesses said because the diocese had spent more than $10 million on the lengthy litigation that eventually returned four properties to the diocese that had been held by disaffiliated Episcopalians. Bruno said the expense was worth it to set a precedent about church property ownership in the diocese and in the state. He went forward with the actions even after then-Presiding Bishop Frank Griswold and the presiding bishop’s chancellor, David Booth Beers, advised against it, he said.

Some of the other March 30 witnesses said Bruno also wanted to leave the diocese in good financial health when he retires. Bruno turns 72, the Episcopal Church’s mandatory retirement age for clergy, in late 2018. His successor, Bishop Coadjutor-Elect John Taylor, is due to be ordained and consecrated on July 8 of this year. 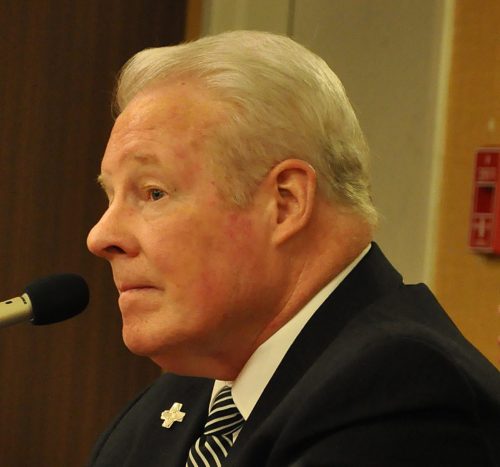 Diocesan Chief of Staff David Tumilty tells the Hearing Panel about Diocese of Los Angeles Bishop J. Jon Bruno’s concerns over the financial health of the diocese and how those concerns informed his decisions about St. James. Photo: Mary Frances Schjonberg/Episcopal News Service

They said the diocese had been hard-hit not only by the litigation costs but also by the 2008 recession that came as the diocese was spending capital to pay for the litigation, according to diocesan Chief of Staff David Tumilty.

Tumilty said that spending resulted in staff cuts and cuts to programs such as one that provided counseling for priests. He also explained that the California “corporation sole” through which Bruno controlled some but not all of diocesan property and other assets was getting strapped by having frequently to cover operating deficits in what is known as the Mission Share Fund budget.

The need for recovering capital was a theme in the March 30 testimony. For instance, when Coughlan asked the bishop who now was liaison to the Anglican Communion Compass Rose Society, an $110,000 job that he had offered to Voorhees, Bruno said the job was unfilled. “I don’t have the money to have it now because I am paying for two years of litigation,” he said, referring to the Title IV proceedings.

“Whose fault is that?” a few members of the audience asked softly but clearly. Voorhees turned and hushed the audience and later Hollerith reminded spectators of his requirement that they not speak out.

Testimony March 30 also showed that the sale of St. James the Great caused controversy between at least two diocesan leaders. The Rev. Canon Melissa McCarthy, Standing Committee president during 2015 and 2016, told the panel that then-Bishop Suffragan Mary Glasspool called her to inquire about a possible sale of St. James. McCarthy said Glasspool told her that, as standing committee president, McCarthy had a duty to block the sale. She said Glasspool asked her to contact an Episcopal diocesan chancellor in the state whom MCarthy knew and whom Glasspool thought could help develop an argument against the sale. 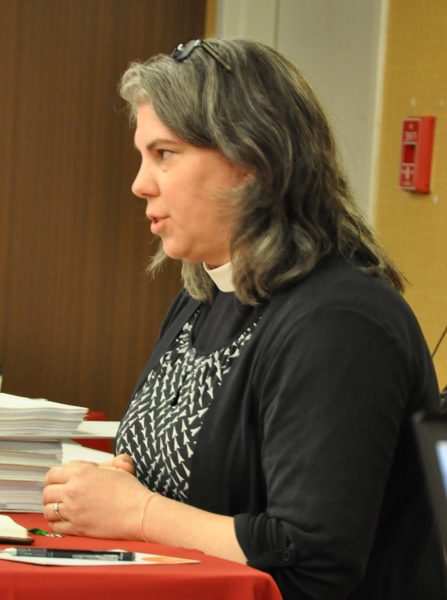 Glasspool planned to contact other Episcopal bishops about the sale, McCarthy said. After praying for a day, McCarthy said she contacted Bruno to tell him about the conversation because she found out that the bishop had confidentially disclosed the offer to buy St. James during a meeting of diocesan executive leadership.

“The bishop suffragan had called the president of the standing committee and enlisted her support to undermine what the bishop diocesan was doing,” McCarthy said, explaining her reason for calling Bruno. “And [because she] had broken his confidentiality, I felt like he needed to know.”

The standing committee approved Bruno’s effort to sell St. James during a special June 8, 2015, meeting more than two months after Bruno accepted the offer. The members gave their approval, she said, even though Bruno did not ask for it. Because the title to the property resided in the corporation sole, McCarthy said, Bruno believed he could act without their approval. McCarthy noted that her committee eventually would have to approve deconsecrating the church if the sale went through.

“We want to have some way to clearly show our support,” she said. “Unique circumstances” surrounded that decision because, by June 8, McCarthy said, “there had already been a social-media campaign launched” and other opposition to the sale had formed.

Moreover, McCarthy said, the committee knew the bishop was looking for ways to recoup the litigation costs and he was concerned about the financial shape of the diocese when he retired. Committee members also talked about how “a congregation and a building are two different things” and that the sale of the property was “in line with the plan that the bishop had had for a number of years.”

When Bruno formed the intention to sell St. James and whether and when he disclosed that intention to Voorhees and the members of St. James has been in dispute. Voorhees and others have insisted that they believed Bruno wanted them to revive St. James so that it could continue in the hard-won building. 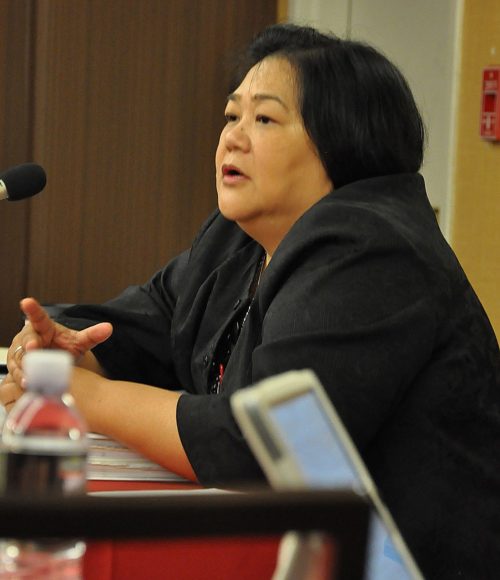 However, the ultimate goal, according Title IV’s introduction (page 131 here), is that “the Church and each Diocese shall support their members in their life in Christ and seek to resolve conflicts by promoting healing, repentance, forgiveness, restitution, justice, amendment of life and reconciliation among all involved or affected.”

Each day’s session began and ended with prayer led by Hearing Panel member the Rev. Erik Larsen of Rhode Island. The opening prayer concluded with all participants and onlookers saying the Lord’s Prayer aloud in unison. At the end of the March 30 afternoon session, Larsen prayed that God would guide the panel to “discern the truth and find your will for us as we move forward.” Larsen prayed that as that discernment continued and people waited on the outcome that “above all we would not lose the charity that you reveal in your son Jesus.”

Hollerith concluded the session with a blessing and liturgical dismissal.

In addition to Hollerith and Larsen, the members of the Hearing Panel considering the allegations against Bruno include Rhode Island Bishop Nicholas Knisely, North Dakota Bishop Michael Smith, and Deborah Stokes of Southern Ohio. All are members of the Disciplinary Board for Bishops, which appointed them.

The Hearing Panel met at the Courtyard by Marriott Hotel in Pasadena, about 90 minutes northeast of Newport Beach. Save St. James the Great organized buses to travel to and from the hearing each day. Close to 120 people at times sat in the gallery during the daily sessions.