[Episcopal News Service – Pasadena, California] The second day of a March 28-30 ecclesiastical disciplinary hearing for Diocese of Los Angeles Bishop J. Jon Bruno included the bishop’s explanation of his behavior during the events in question as well as more testimony from a vicar who said she became uncomfortable talking to him alone about the situation.

The allegations detailed at the hearing stem from Bruno’s behavior during and after his unsuccessful 2015 attempt to sell St. James the Great Episcopal Church in Newport Beach to a condominium developer for $15 million. Members of the church initially filed the disciplinary complaint against him.

Bruno says in his response brief to the hearing panel that five of the allegations must be decided in his favor because “undisputed evidence establishes no canonical violation.” He says the sixth allegation concerning alleged misrepresentations to Voorhees presents conflicting evidence for the panel to weigh. However, he calls it a “she said (he told me he wouldn’t sell the property), he said (I never said I wouldn’t sell the property) dichotomy.”

During the March 29 morning session, Diocese of Los Angeles Vice Chancellor Julie Dean Larsen led Voorhees through more than two hours of questioning about her testimony the previous day. Her questions seemed intent on uncovering inconsistencies between Voorhees’ statements during those three hours, and what she had previously said, written or done. Larsen also questioned Voorhees’ understanding of diocesan policies, her recall of the precise sequence of events that led to Bruno closing St. James on June 29, 2015, and her interpretation of certain actions and statements by Bruno.

A controversial moment occurred when Larsen asked Voorhees about an encounter she had on June 16 in a restroom with then-Los Angeles Bishop Suffragan Mary Glasspool. The bishop, Voorhees said, told her she was sorry for what was happening to her and St. James and offered a sympathetic hug. Voorhees said she told Glasspool she “preferred action rather than a hug.”

When Larsen asked Voorhees about the bishop’s response, Voorhees replied, “I would rather not say what she said to me in the women’s room.” When Diocese of Southern Virginia Bishop Herman Hollerith IV, president of the Hearing Panel, asked her why she was hesitant, Voorhees said she knew that Glasspool was “in a lot of trouble” with Bruno and she did not know if the conversation was confidential.

After a short break, Hollerith told Voorhees she needed to relate the rest of the conversation.

Voorhees recalled that Glasspool told her she had “gotten into a lot of trouble” by trying to talk to the diocesan standing committee about the sale of St. James. Glasspool said that attempt “upset the bishop so much that they had to have mediation. I had no idea that had happened and I felt terrible for her that she had to go through that,” Voorhees said.

Voorhees recalled Glasspool saying that the mediation had resulted in some kind of agreement. “And then she just said the bishop scared the s— out of her and that she needed to get out of there and she was just trying to make it through General Convention.”

Glasspool is currently an assisting bishop in the Diocese of New York.

In reply to a question from Larsen, Voorhees denied that she and Glasspool discussed the Title IV disciplinary complaint against Bruno.

Larsen later asked Voorhees why she did not talk to Bruno after he told her in an emailed letter that he interpreted her June 26 “last pastoral letter” to the congregation the day before its last service in the building as her resignation.

“I didn’t feel comfortable being alone with him,” Voorhees said.

Also on March 29, Diocese Chancellor Richard Zevnik led Bruno through nearly 4.5 hours of detailed questions about his authority, the diocese’s finances, the lengthy litigation to recover the property of four parishes that had voted in 2003 to disaffiliate with the diocese and the sequence of events connected with the attempted sale of St. James.

Bruno said that he went to court over those properties because of the precedent it would have set had he not. The bishop said that as early as 2008 he intended to sell the properties once they were recovered to cover the litigation costs and because the four parishes were “redundant” because there were other nearby parishes where Episcopalians could worship. He has since sold two of the four and reopened a third.

The St. James sale fell through and the church sits empty because Bruno locked out the congregation in mid-2015. A new community that calls itself Save St. James the Great worships in the community room of Newport Beach City Hall with Voorhees as its priest.

Bruno said he allowed Voorhees to attempt to restart St. James, one of the properties involved in the litigation, because she was passionate about the congregation and he hoped she could make a go of it. He said he promised to give her “as much help as I could.”

When he reconsecrated the church property in the fall of 2013 as St. James the Great Episcopal Church, Bruno said he gave the small congregation a pep talk of sorts. “I was trying to convince the congregation to make a miracle,” he told the Hearing Panel.

“And we did,” some members of the audience replied, drawing a caution from Hollerith to remain silent.

Bruno repeatedly insisted that Voorhees did not give him required status reports about St. James’ finances but said he had not personally asked for the reports, relying instead on staff to do so. Voorhees said staffers told her St. James’ status as a “forming congregation” meant she did not have to comply with the requirement for those reports included in the diocese’s policies for mission congregations. 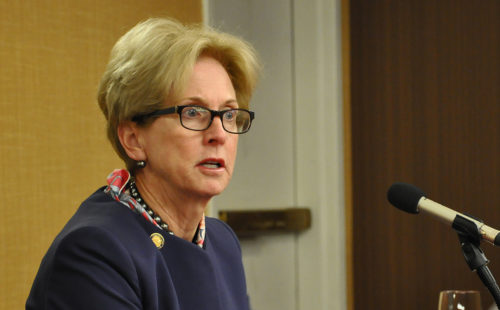 Church Attorney Raymond “Jerry” Coughlan, appointed to represent the Episcopal Church in the case, sharply questioned the bishop about using scant financial information from St. James as he decided whether to accept the $15 million offer for the property. Bruno admitted that he used a 2013 parochial report that only included statistics from the three months of the new congregation’s existence and a budget included in a July 2014 application for a diocesan grant.

Coughlan also challenged Bruno’s contention that the $15 million offer was unsolicited, attempting to show that the bishop had instructed staff members to look at offers higher than two earlier unsolicited offers that he rejected.

He sharply questioned Bruno about his explanation to St. James members on May 17, 2015, that $6.3 million of the possible sale would go into the diocese’s Poor and Needy Fund, $1 million would go to St. James to help it establish what he called “a church without walls” and the rest would be invested in a trust fund, named in honor of the congregation, to fund other mission and ministry in the diocese.

Under Coughlan’s questioning, Bruno denied that he had accepted the $15 million offer to gain $6.3 million to buy the remaining interest in some commercial properties in Anaheim, California, that had been donated to the diocese. The bishop said using part of the St. James proceeds was only one option for financing that purchase, which would allow the diocese to use the properties to produce more income for ministry. Another option was a bank loan, which the diocese has since obtained and used to purchase the remaining interest in the Anaheim properties, according to the bishop.

Bruno, describing the diocese as “property-rich and cash-poor,” said he had an ongoing effort to trim the number of congregations by consolidating some and “liquidating” some of the property involved.

In another line of questioning, Bruno said he did not reply to an email from Voorhees on which he was copied in which she reported a phone call she had gotten from a realtor who said he had heard St. James was for sale. In the email, Voorhees asked if there was anything she needed to know because she said she had “devoted my life” to growing the congregation. She said she wanted to know if she was “wasting her time.”

The bishop said he didn’t think any ministry was a waste of time. However, he said, “if I answered every email where somebody had a concern or a worry and it’s not addressed to me, I would not sleep.” 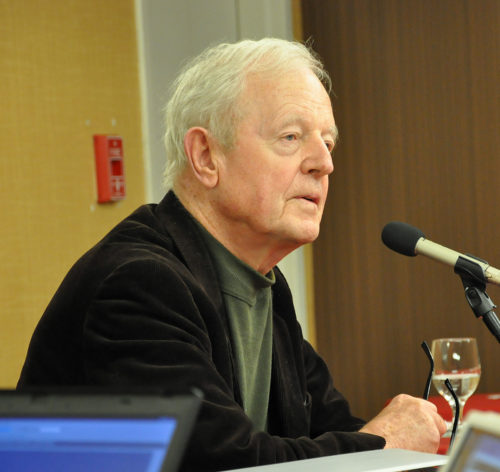 St. James the Great Episcopal Church member Michael Strong tells the Hearing Panel March 29 about his experience before and after Diocese of Los Angeles Bishop J. Jon Bruno’s attempt to sell the church property. Strong and another St. James member, Kathi Liebermann, were the only other people who spoke to the Hearing Panel on March 29. Liebermann’s parents, Dan and Betty Connelly, were active in the diocese and the wider church and Bruno and Dan Liebermann were longtime friends. Photo: Mary Frances Schjonberg/Episcopal News Service

While the Episcopal Church Title IV disciplinary canons in 2011 moved clergy disciplinary actions from a legalistic process to a professional-conduct model, many legal terms persist. For instance, Hollerith and the attorneys referred to Larsen’s questioning as a “cross examination” and there were “objections” about some questions or whether certain “evidence” was “admissible.”

However, the ultimate goal, according Title IV’s introduction (page 131 here) is that “the Church and each Diocese shall support their members in their life in Christ and seek to resolve conflicts by promoting healing, repentance, forgiveness, restitution, justice, amendment of life and reconciliation among all involved or affected.”

Each day’s session began and ended with prayer led by Hearing Panel member the Rev. Erik Larsen of Rhode Island. The opening prayer concluded with all participants and onlookers saying the Lord’s Prayer aloud in unison.

In addition to Hollerith and Larsen, the members of the Hearing Panel considering the allegations against Bruno include Rhode Island Bishop Nicholas Knisely, North Dakota Bishop Michael Smith, and Deborah Stokes of Southern Ohio. All are members of the Disciplinary Board for Bishops, which appointed them.

The Hearing Panel is hearing testimony in a meeting room of the Courtyard by Marriott Hotel in Pasadena, about 90 minutes northeast of Newport Beach. Save St. James the Great has organized buses to travel to and from the hearing each day. Close to 120 people sat in the gallery at times during both the March 28 and 29 sessions.