[Episcopal News Service – Pasadena, California] The three-day ecclesiastical disciplinary hearing for Diocese of Los Angeles Bishop J. Jon Bruno began March 28 with opening statements from the prosecution and defense, followed by at times emotional testimony from members of the congregation at the center of the dispute.

Some of those witnesses cried as they testified about the allegations, initially brought by the members of St. James the Great Episcopal Church, stemming from Bruno’s behavior during and after his unsuccessful 2015 attempt to sell the church in Newport Beach to a condominium developer for $15 million.

Church Attorney Jerry Coughlan, appointed to represent the Episcopal Church, told the five-member Hearing Panel that the evidence would meet the “clear and convincing” canonical standard that Bruno was dishonest with the congregation and the Newport Beach community about his plans, about St. James’ ability to thrive and about the status of their vicar.

After the diocese recovered the St. James property in 2013 following a nearly 10-year legal battle with a group of disaffected Episcopalians who had voted to leave the Church and affiliated with what became known as the Anglican Church in North America, Bruno re-consecrated the property as St. James the Great.The bishop appointed Voorhees as vicar and she and a small group of members worked tirelessly, Coughlin said, to rebuild the congregation.

They and Voorhees “were led to believe that this was an ongoing future; that this was something that if they threw themselves into it would be a wonderful place to worship, and they did it,” Coughlan said.

Instead, he said, the bishop misrepresented his intentions for the 40,000-square-foot property in the face of canons that define “an affirmative duty” for all clergy to refrain from any behavior or communications that are dishonest or deceitful or that misrepresent a situation.

“We all rely on our clergy being honest,” he said.

Diocese of Los Angeles Vice Chancellor Julie Dean Larsen said during her opening statement that 90 percent of the facts in the case are undisputed. Bruno, she told the Hearing Panel, acted based on the knowledge he believed he had at the time when he accepted an unsolicited $15 million all-cash offer for the St. James the Great property. That property appraised five years earlier for $7.8 million, Larsen said.

“The facts will show that he carefully and prayerfully considered that decision as quickly as possible, that he looked at the information that he had at the time regarding the finances and the sustainability of the congregation that was there,” she said.

Larsen told the Hearing Panel members that when they consider the evidence, they would see that Bruno “did not misrepresent his intentions with regard to the property to anyone.”

“These charges should be dismissed,” she concluded.

Diocese of Southern Virginia Bishop Herman Hollerith IV is president of the Hearing Panel considering the case against Bruno. The panel, appointed by the Disciplinary Board for Bishops from among its members, includes Rhode Island Bishop Nicholas Knisely, North Dakota Bishop Michael Smith, the Rev. Erik Larsen of Rhode Island and Deborah Stokes of Southern Ohio. 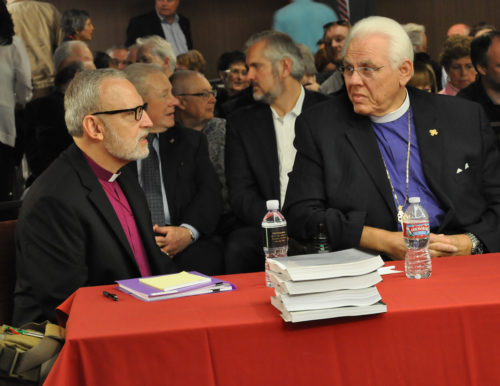 Testimony began with lay leader Bruce Bennett detailing how he and his wife, serving as co-bishop’s wardens, helped the small group of Episcopalians repair and refurbish a campus that he said had not been kept up by the group of disaffected Episcopalians. He and his wife initially worked 80 or more hours a week, even as he was being treated for advanced prostate cancer.

Bennett said they worked so hard because Bruno’s early actions and words had led them to believe that it was his “desire and his belief” that St. James the Great would exist for years to come.

Evangeline Kroner Andersen testified, at times emotionally, about how her family came to St. James soon after the remaining Episcopalians reopened the building. Voorhees quickly recruited Andersen, an internal auditor for a utility company, to help set up the congregation’s financial systems. She was part of a financial team that worked with Voorhees, she said, to develop budgets, project finances for future years and develop stewardship in the congregation.

St. James’ financial footing got surer, Andersen told the panel. “The actual condition was zero dollars” when they began in late 2013, she said. By May 2014, there was $100,000 in the bank. Pledge and plate giving increased all year, Andersen said, calling it “amazing financial growth.”

When Bruno told the congregation on May 17, 2015, that he had sold the church property, in part because its expenses were high and it was not sustainable, Andersen disagreed. The trend was pointing upward and “imagine what we could have done” if the congregation had been allowed to continue, she said.

Andersen grew up Episcopalian, attending school at Washington National Cathedral, but her husband had not gone to church. In the midst of the conflict, he was baptized. “As much as it has tried my faith, he has found faith through this,” she said, wiping away tears. 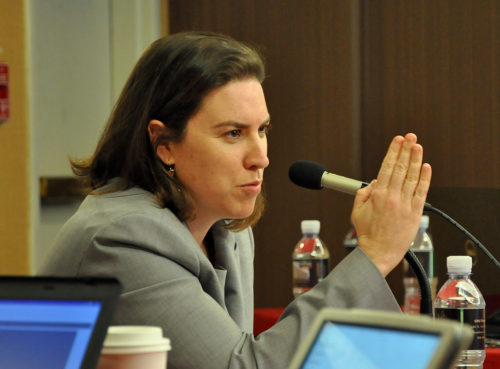 St. James the Great Episcopal Church member Evangeline Korner Anderson testified before the Hearing Panel March 28 during the disciplinary hearing for Los Angeles Bishop J. Jon Bruno. Anderson said as a member of the congregation’s financial team she believed the congregation was close to being self-sustaining when Bruno closed it in mid-2015. Photo: Mary Frances Schjonberg/Episcopal News Service

Some of the church’s annual income came from renting the kitchen to Patrick DiGiacoma, a former Marine and stockbroker turned chef. He and a business partner leased St. James’ kitchen as they started a catering business. They invested money to upgrade the kitchen and they cooked brunch for members on Sunday mornings, feeding anyone who showed up.

“I called it a backdoor ministry,” DiGiacoma, a self-described lapsed Roman Catholic, told the committee.

Homeless people in the neighborhood smelled the cooking and came to the back door, asking for food. They always got it, he said, and some stayed for church or the cooking classes he offered. He also taught cooking to autistic children and young adults with Asperger’s syndrome.

“This community at the church has been amazing,” he said of the people with whom he began to worship. “Everybody just steps up [to volunteer to get things done], they were always there. The parishioners here, which gets missed in this trial, are the most amazing people I have ever met. They are breathtakingly generous and kind.”

All three members described the May 17, 2015, meeting at the church during which Bruno announced he had sold the property as being in similar terms to Bennett’s summary. “There was indignation. There was anger. There were tears. There was frustration,” he said.

Warren Wimer, who lives in the Lido Isle development where St. James the Great is located, told the committee that as president of the homeowners association, he conducted a survey of residents about the plan to demolish St. James. He said 92 percent opposed it. 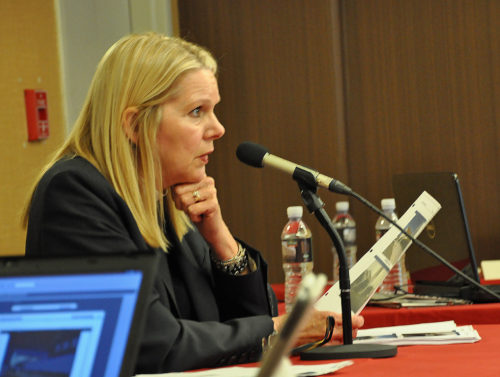 Coughlan then led Voorhees through a three-hour recounting of her leadership at St. James, how the sale was disclosed and the aftermath of that disclosure. Voorhees, who designed churches before she was ordained, continued that work after she became a priest and consulted on the construction of a new St. James building in 2000. That work was part of what called her back to the congregation when she knew Bruno would be looking for a vicar after the property was recovered, she said.

“I actually felt that out of the fire, there could be a phoenix,” she told the panel, explaining she told him she would work without pay for two years while rebuilding the mission of the congregation.

She said the bishop never told her he planned to sell St. James, even though she knew he had considered at one time what would happen to it and three other properties that were recovered from departing Episcopalians.

Voorhees described how she worked to increase not only ministry but also revenue coming into St. James. She negotiated a deal with another developer who needed to rent parking spaces to meet city regulations. The deal would have brought in $6,800 a month but approval languished in the diocesan offices, she said, while the bishop said the congregation was having trouble with parking and was not bringing in enough revenue to sustain itself.

By the middle of 2015 when Bruno tried to sell the property, the congregation was paying Voorhees the equivalent of $60,000 on an annual basis and she was due to get two salary increases in the remainder of the year, she said. The congregation, both Voorhees and Andersen said, had planned a $500,000 budget for 2015, hoped to be able to drop its diocesan assistance by 2016 and hoped to be able to become a parish soon after that.

It was against this backdrop that Voorhees said that Bruno told her he had a contract to sell the property and began telling people, including the Newport Beach mayor, that the congregation could not sustain itself.

“I felt deceived. I felt used. I felt all sorts of emotions after all the work we’d put in,” she said. “There was no conversation. It was so cold, so brutal.”

After the parish learned of the sale, Voorhees said she was consumed by trying to care pastorally for church members while she was dealing with her own emotions.

“Some people had lost their church twice now; once when the Anglicans took it and now with the sale,” she said, describing people “falling on the ground outside my office sobbing.”

The vicar sent a series of letters to the congregation updating them on the sale and the transition of the parish. On June 21, 2015, she issued what she called a “Here I Stand” letter challenging some of Bruno’s statements and then wrote on June 26 a “last pastoral letter” the day before the congregation’s last service in the building.

“I have decided that I cannot lead you into a diaspora situation, not only for personal reasons but for professional reasons as well,” she wrote in that last letter.

Voorhees testified that she had begun to feel overwhelmed and initially agreed to take a $111,000 diocesan-funded job with the Anglican Compass Rose Society. A main reason, she said, was because “my world was spinning and collapsing and I was trying to be obedient to what I thought my bishop wanted me to do.”

However, Voorhees said, during coffee hour on the day of the final service at St. James, the congregants asked her to stay with them. Fighting back tears, Voorhees said, “I took a vow to take care of the flock that was entrusted to me and I looked at the whole room and thought I can’t abandon them right now.”

She later turned back her first paycheck from the new job, she said, after it became clear to her that Bruno was not being honest about what was happening.

On June 29, a diocesan staffer emailed her a letter from the bishop, saying that he interpreted the June 26 letter as her resignation from St. James. Later that day other diocesan officials told her via email that the locks on the church doors were changed and she would have to arrange to remove her personal items.

Voorhees told the panel she was “frankly blown away by the tone.”

“I didn’t think it was necessary. I thought it was ridiculously hostile to just come in and lock a building down and not trust that I wouldn’t remain professional and do the right thing,” she said.

The Hearing Panel is hearing testimony in a meeting room of the Courtyard by Marriott Hotel in Pasadena about 90 minutes northeast of Newport Beach. Save St. James the Great has organized buses to travel to and from the hearing each day.

Editor’s note: This story was updated March 29, 2017, at 10:30 EDT to recast a portion of the Rev. Canon Cindy Evans Voorhees’ testimony.