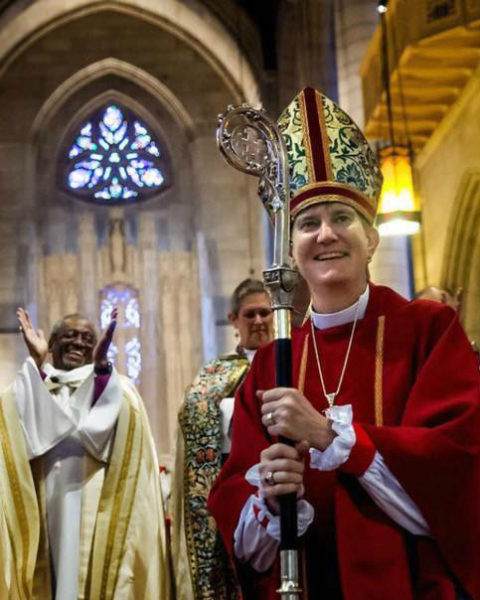 The Rt. Rev. Gretchen M. Rehberg was ordained and consecrated as the ninth bishop of the Diocese of Spokane on March 18 at the Episcopal Cathedral of St. John the Evangelist in Spokane, Washington. Photo: Diocese of Spokane

[Diocese of Spokane] The Rt. Rev. Gretchen M. Rehberg was ordained and consecrated as the ninth bishop of the Diocese of Spokane on March 18 at the Episcopal Cathedral of St. John the Evangelist in Spokane, Washington. During the course of the service, the new bishop received a number of gifts including a pectoral cross, ring, stole, miter and crozier. During the service, she was “seated” in the “cathedra” or bishop’s chair that is symbolic of the bishop’s office.

Banners representing the diocese’s congregations and several organizations led the procession of diocesan and interfaith clergy, regional dignitaries, and choristers from congregations around the diocese. The choir of more than 100 voices joined awe-inspiring carillon, brass, and pipe organ music before, during, and after the service. Following the service, worshippers enjoyed a celebratory reception in the cathedral’s Great Hall.

The entire service may be viewed on the diocesan website at this link.

Rehberg was elected ninth bishop of the Episcopal Diocese of Spokane on Oct. 18, 2016, during the diocese’s 52nd annual convention. Prior to her election, she was the rector of Episcopal Church of the Nativity, in Lewiston, Idaho, a position she had held since 2006.

Before being elected, she served the diocese as chair of the Commission on Ministry, a canon for regional mission, and a trainer for the College for Congregational Development. In these ministries, she combined her passion for equipping people for ministry and assisting congregations in becoming more faithful, healthy and effective communities of faith.

She has a master of divinity from General Seminary, a doctor of ministry from Wesley Seminary, and a doctor of philosophy in chemistry.  She was a professor of organic chemistry at Bucknell University, in addition to having served her community as an emergency medical technician and firefighter.

Rehberg succeeds the Rt. Rev. James E. Waggoner, Jr., who served as the eighth bishop of the diocese for more than 16 years. The Episcopal Diocese of Spokane is the Episcopal Church in Eastern Washington and North Idaho.