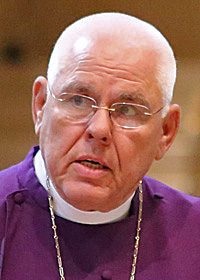 The allegations, initially brought by the members of St. James the Great Episcopal Church, stem from Bruno’s 2015 attempt to sell the church in Newport Beach to a condominium developer for $15 million.

Diocese of Southern Virginia Bishop Herman Hollerith IV is president of the Hearing Panel that will consider the case against Bruno. The panel, appointed by the Disciplinary Board for Bishops from among its members,  includes Rhode Island Bishop Nicholas Knisely, North Dakota Bishop Michael Smith, the Rev. Erik Larsen of Rhode Island and Deborah Stokes of Southern Ohio.

The St. James the Great complainants allege that Bruno violated church canons because he

Bruno says in his defense brief to the hearing panel that he will establish during the hearing that the issue of the standing committee’s approval does not apply because the property never sold. He admits that he did not have the standing committee’s approval when he entered into a contract to sell the property but he obtained it two months later before the then-still expected closing.

He says that the alleged misrepresentations were either not made or that he based his statements on what he believed were “true facts.” Bruno also says that Voorhees determined the date of St. James’ last service and that “prudent business practices” required him to “secure the property” after that date.

Bruno says that five of the allegations must be decided in his favor because “undisputed evidence establishes no canonical violation.” He says the sixth allegation concerning alleged misrepresentations to Voorhees presents conflicting evidence for the panel to weigh. However, he calls it a “she said (he told me he wouldn’t sell the property), he said (I never said I wouldn’t sell the property) dichotomy.”

Church Attorney Jerry Coughlan, appointed to represent the Episcopal Church, says in the complainant’s brief that Bruno was “seduced” by a $15 million business opportunity and then “tried to cover up the real reasons for the sale.”

“In doing so, he gave no real heed to the feelings of the many people who had relied on his positive statements” about St. James’ future, Coughlan, a former federal prosecutor, claimed.

Bruno, he said, has ignored Title IV’s goal of resolving conflicts by “promoting healing, repentance, forgiveness, restitution, justice, amendment of life and reconciliation among all involved or affected.” In fact, the attorney said. Bruno has acted “in exactly the opposite fashion, by his continued attacks on everyone involved in this case.”

Bruno is at least the tenth bishop in Episcopal Church history to have a disciplinary accusation against him reach the level of a formal hearing under the Church’s process for handling complaints applicable at the time. Those processes have changed many times during the life of the Church.

A decision will follow at some point after the end of the hearing. The Hearing Panel has a range of actions it can take, ranging from dismissal of the allegations to removing Bruno from his ordained ministry. Bruno or Coughlan would have 40 days to appeal the Hearing Panel’s decision to the Court of Review for Bishops.

Bruno turns 72, the Church’s mandatory retirement age, in late 2018. His successor, Bishop Coadjutor-Elect John Taylor, is due to be ordained and consecrated on July 8 of this year.

A timeline of the events leading up to the hearing

The Griffith Co. donated the land on what is known as the Balboa Peninsula on which St. James sits to the Episcopal Church in 1945 with a deed restriction requiring that the land be used “for church purposes exclusively.” The small congregation that existed at the time of the donation grew to the point where, with help from the diocese, it built a small church on the land in the late 1940s. The congregation outgrew that building and, 50 years later, started building a large complex, which Bruno consecrated in 2001.

Three years later a majority of the congregation’s members voted to disaffiliate with the Episcopal Church but vowed to keep the church property. They affiliated with what later became known as the Anglican Church in North America. Bruno sued in California civil court and, after costly litigation, recovered the property in 2013. He re-consecrated the building as St. James the Great in October of that year. He asked the Rev. Canon Cindy Evans Voorhees, whom he appointed as vicar, and the remaining Episcopalians to form a new congregation.

Those congregants say that by the following spring, as many as 100 people attended Sunday worship and the church’s mission activities attracted and served many others. The 2015 budget envisioned $500,000 in income, according to documents St. James says it filed with the hearing panel.

Five days after Easter 2015, Bruno signed an agreement with Legacy Residential Partners to sell the property. St. James congregants say he told them of the plan on May 17, 2015.

Griffith Co., the donor of the land, reminded Bruno in a letter in early June of that year about the deed restriction and, that same month, members of the Newport Beach City Council voiced skepticism about the deal.

St. James members formed Save St. James the Great and sued Bruno in local civil court in his capacity as the California “corporation sole” for the diocese on June 23, 2015, based on the deed restriction. The court ruled that the members could not sue because neither they nor their group is listed on the deed. Save St. James is appealing. (The purpose of the “corp sole” is to hold real property and other assets for the use and benefit of the diocese and the church.)

Bruno as “corporation sole” sued the Griffith Co. in Orange County, California Superior Court on June 26, 2015, arguing that a 1984 quitclaim deed eliminated the restriction. Bruno sought not only to end any challenges or claims to the title; he also said the company had slandered the title and sought punitive damages from it. The court ruled in favor of the bishop and the diocese. Griffith Co. appealed, and Third District of the California Court of Appeal agreed on Feb. 24 with the company. 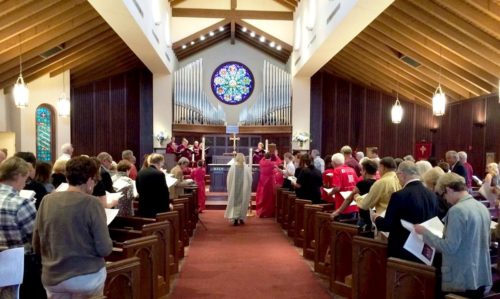 The bishop changed the locks on St. James’ buildings on June 29, 2015, according to the members who have not been able to worship in the church since.

The sale fell through in the midst of these disputes and St. James members claim that Bruno has no prospect of selling the property, in part because of Newport Beach community opposition to such a development.

Those members filed a canonical complaint, signed by 117 people, against Bruno on July 6, 2015, initiating a Title IV process that has led to the March 28-30 hearing. The prior steps outlined in Title IV to reconcile the parties failed, and a July 1, 2016, notice announced that Bruno would face a Hearing Panel on the accusations. Last October, the panel refused Bruno’s request to dismiss the case and said it would not order him to let St. James members back into the building until it had considered the complaint during the scheduled hearing.

Bruno’s trial is the first of a bishop since the Episcopal Church’s extensively revised Title IV disciplinary canons went into effect July 1, 2011. The revision was intended to move clergy disciplinary actions from a legalistic process to a professional-conduct model, such as those used in the medical, legal and social work profession, balanced with a sense of pastoral care and theology, according to those who worked on the revision.

Title IV’s introduction (page 131 here) says that “the Church and each Diocese shall support their members in their life in Christ and seek to resolve conflicts by promoting healing, repentance, forgiveness, restitution, justice, amendment of life and reconciliation among all involved or affected.”

In general, concerns about clergy behavior are reported to an intake officer who creates a written report. Following that, the matter could be resolved by pastoral care, conciliation, an agreement with the bishop (or presiding bishop in this case), an investigation, or any combination of these.

If the complaint moves to an investigation, some of the allegations could go to a more formal mediation and, finally if necessary, a hearing panel. The complaint against Bruno has reached the latter stage.

The hearing is taking place at the Courtyard by Marriott in Pasadena.