[Episcopal News Service] The demand for water is expected to increase 55 percent by 2030 and at the same time global water resources may only meet 60 percent of the world’s needs.

“Africa, India, the Middle East and Australia already are in crisis,” said Maude Barlow, a former United Nations senior advisor on water, and an author, political activist and policy critic. Some say “the solution to the water crisis is to commodify water,” she added, during a March 23 session on “Waters: Commons or Commodity” during Water Justice,  a global conference taking place at Trinity Church Wall Street in New York City and webcast worldwide March 22-24. 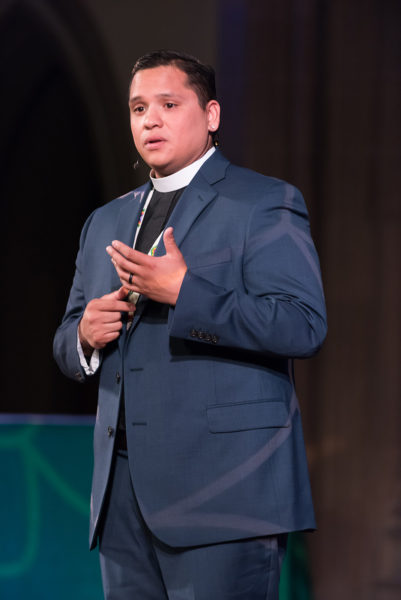 The conference aims to offer actionable guidance for individuals, congregations and the larger faith community surrounding the need for water justice initiatives in areas of access, droughts, pollution, rising tides and flooding. Water Justice is the 46th annual conference organized by the Trinity Institute, past conferences have addressed racial justice and economic inequality.

If the Great Lakes, the largest surface freshwater system on Earth, “were pumped as mercilessly as ground water, they would be dry in 80 years,” Barlow warned. Russia’s Aral Sea, once the fourth-largest freshwater lake in the world, is now 10 percent its former size.  Half the waters in China, a water-rich country, have disappeared. Sao Paulo, the second largest city in the world, is drought-stricken because rapid destruction of the Amazon rainforest has decreased vapor clouds that used to carry water to central and south Brazil.

All of this, Barlow said, is happening as corporations, governments and the World Bank, contemplate a global waters market, where water futures can be sold like oil and gas.

“Is it [water] a human right, a public trust or a private asset?” asked Barlow.

“We have to fiercely protect it everywhere as a commons,” she said. “Water shouldn’t be put into the market. That doesn’t mean the private sector doesn’t have a role. But the central question is who owns water itself, and who has access to it and who does not, and in places around the world now this is a life or death situation.”

The United Nations says water is a human right, and Barlow was instrumental in moving the intergovernmental organization to make that determination. On July 28, 2010, the U.N. General Assembly recognized the human right to water and sanitation and acknowledged that access to both are “essential to the realization of all human rights.” The resolution passed with 122 nations in favor, zero against and 41 abstentions, including the United States and Canada. (Both the U.S. and Canada have since adopted the resolution.)

Still, saying water is a human right doesn’t mean it’s protected or that everyone has access to it. As examples, Barlow mentioned Detroit and Baltimore, two cities that have turned off residents’ taps.

In Detroit, a financially strapped, hollowed-out inner city, residents’ water rates tripled and many poor people couldn’t afford to pay their water bills; in Baltimore, city officials maintained it was necessary to have a system in which everyone paid pays “their fair share.”

As Christiana Zenner Peppard, a professor at Fordham University a theologian and freshwater expert, pointed out in her response to Barlow’s talk, a human being can survive less than 7 days without water.

“Water is not replaceable by any other thing; it is the baseline for human, ecological and the planetary system,” she said. “You cannot talk about water and justice as two separate things.”

In terms of religious values and water ethics, “it’s foundational to life and understood as finite,” and at least from the Christian point of view, access to water is caring for “the least of these.”

The Roman Catholic Church, she said, has been an advocate for water as a human right since the early aughts; in his encyclical on the environment, Pope Francis said that water shouldn’t be commodified.

The world’s water crisis manifests in many ways, from rising waters, to drought, to waters polluted by toxins, to the proximity of a drinking water source. Following, Barlow’s talk and Peppard’s response, Trinity’s audience heard from three storytellers living on the frontlines of three different water crises.

Three years after the water crisis in Flint, Michigan, residents continue to rely on bottled water for their drinking and hygienic needs, said Nakiya Wakes, an activist and spokesperson for Flint Rising, a coalition of community organizations preparing Flint residents for the long-haul.

In April 2014, under the leadership of an emergency manager and to save $5 million, the city’s water supply was switched from Lake Huron via Detroit’s municipal water system to the Flint River, a more corrosive source. At the same time, the emergency manager, seeking to save $100 a day, ordered that the water not be treated with a chemical to prevent lead from leaching out of the city’s aging pipes into the water running through them and destined for residents. The state had, mistakenly, told Flint officials that federal guidelines did not require the chemical treatment, according to the New York Times.

Almost immediately following the switch, residents began to complain about the water’s color, taste and smell, and the skin irritation caused by bathing in it, yet government officials maintained the water’s safety. It wasn’t until January 2016 that a federal state of emergency was declared and residents were told to use only bottled or filtered water for drinking or bathing.

While still drinking tap water, Wakes miscarried twins, she said, and both her son and her daughter have elevated lead levels in their bodies; her daughter’s hair began falling out, her son has had behavioral problems, and both children had rashes on their bodies.

“We have been lied to for too long and we don’t trust our government,” she said. “Three years later we are drinking bottled water … we don’t have access to clean water in the United States of America. They call Michigan “Pure Michigan” and we are being pure poisoned.”

The Rev. Brandon Mauai, a deacon in the Diocese of North Dakota and a member of the Standing Rock Sioux Nation talked about the Episcopal Church’s support for the Standing Rock Sioux Nation as it and its allies fought against the route of the Dakota Access Pipeline. The 1,134-mile pipeline was originally routed near Bismarck, North Dakota, but changed after residents expressed concern an accident would contaminate the city’s drinking water. Instead, the pipeline crosses under the Missouri River at Lake Oahe, a reservoir that provides water for the Standing Rock reservation and others downstream.

In September 2016 federal officials stopped construction of the pipeline on lands bordering or under Lake Oahe belonging to the U.S. Army Corps of Engineers, the federal agency responsible for permitting on public lands and waterways. In December, President Barack Obama blocked construction on the disputed segment of the pipeline.

In one of his first actions following his inauguration, President Donald Trump instructed the U.S. Army Corps of Engineers to move forward with the pipeline’s environmental review to speed up the process. On Feb. 8, the Corps gave permission to the company developing the pipeline to continue construction.

Oil is expected to flow through the North Dakota Access Pipeline by this weekend, said Mauai, following the morning session in a conversation with Episcopal News Service.

“That really deflated us on Standing Rock,” said Mauai “But I’m hoping this [conference] will raise awareness across the world because it’s not only happening at Standing Rock, there are other places where this is happening, in Navajoland and other reservations in the United States. And I’m hoping that Standing Rock made an impression, that people are going to say ‘Okay, this is huge because it’s a threat to the tribe’s water source and those around it.’”

Even if the oil is flowing through the pipeline, though, the story isn’t over, said Mauai.

“We will continue to speak to whomever will hear us. The church will continue to take an active role, we were active in the cleanup … we’ll go forward whatever the tribe needs from us as a church we’ll be there to assist however we can,” he said.

Thousands of Episcopalians joined others in support of the Sioux Nation, most recently during March 10 Native Nations Rise demonstration and rally in Washington, D.C.

Archbishop Winston Halapua, one of three primates of the Anglican Church in Polynesia and Aotearoa New Zealand, responsible for New Zealand-based Samoan, Tongan, Indo-Fijian, and Fijian congregations, talked about his childhood and growing up in Tonga, where his life was in sync with the tide cycle.

Sea-level rise continues to claim whole islands in the Pacific, where the Anglican Church of Aotearoa, New Zealand and Polynesia is establishing a “clear resilience strategy” to strengthen its response to future natural disasters in the Pacific islands.

“Water is a reflection of God; you and I don’t live without water,” said Halapua.

–  Lynette Wilson is an editor/reporter for Episcopal News Service.