[Episcopal News Service] The Rev. Art Bass is a trial lawyer and Episcopal deacon in Cleveland, Tennessee. He also happens to be the mastermind behind one of the most popular Episcopal-themed pages on Facebook – a page he maintained mostly in anonymity until he was confronted with his growing online popularity at a diocesan workshop.

One of the speakers at the workshop was advising congregations to use social media to reach parishioners and the community. One of the examples cited as effective outreach on Facebook was the widely popular humor page Episcopal Church Memes.

Bass listened quietly. After the presentation, he went up and introduced himself to the speakers.

That’s me, he told them. I post those funny photos and captions. 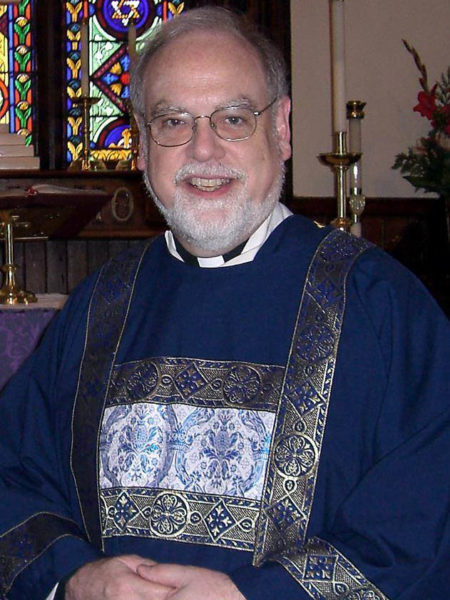 The Rev. Art Bass is a deacon at St. Luke’s Episcopal Church in Cleveland, Tennessee. Photo: Art Bass, via Facebook

“That was the first time I ever told anyone in my diocese that I was doing this,” Bass, 66, said in a phone interview with Episcopal News Service. “I don’t hide the fact that I do this page, but I don’t make a big deal about it either, because it’s not about me.”

Instead, Bass sees Episcopal Church Memes as his humble Christian ministry, spreading the good news and promoting the Episcopal Church, one impact-typeface headline at a time. At nearly 70,000 followers, the message and the humor is clearly connecting with his page’s audience.

Bass, a lifelong Episcopalian, takes his faith seriously but also thinks a bit of humor goes a long way when evangelizing. He’s been known to sprinkle one-liners into his sermons – “Every good homilist does” – because, he said, often that is what worshipers will remember days later. And he’s convinced Jesus had a sense of humor.

Take Matthew 19:24, the Gospel passage about how a camel trying to get through the eye of a needle would find that squeeze easy, compared to a rich man’s efforts to get into heaven.

“That’s humor, that’s hyperbole,” Bass said. “I’m sure some of the people who heard Jesus tell that parable probably chuckled.”

Jump ahead a couple millennia, and Jesus’ biblical one-liner might be told (or retold) as a meme. For those unfamiliar with this social media phenomenon, a meme is incredibly easy to produce: Take a popular stock image, like Grumpy Cat or The Most Interesting Man in the World, and use an online meme generator to add a snarky caption or witty joke. Then post away.

But it’s much harder to make a meme funny, harder still to make a funny meme go viral. Bass’ successful formula on Episcopal Church Memes could be seen at work in his March 21 post featuring Grumpy Cat. In this image, the perpetually downcast Siamese has found his way into a church or cathedral. Bass’ caption in big bold letters reads: “Holy Eucharist to be followed by a special meeting of the vestry? Heaven and hell on the same day.”

As of March 23, that image had been shared from the Episcopal Church Memes page more than 350 times and generated plenty of approving comments, like St. George Pinckney’s quip, “For God so loved the world, that he didn’t send a committee.”

Original meme: The Most Interesting Cat in the World

The best memes can feel both timeless and ephemeral, like a high-protein snack for the funny bone, but the first one Bass ever created served a very specific ecclesiastical purpose in his role as deacon at St. Luke’s Episcopal Church in Cleveland, Tennessee.

It was early fall 2012, and St. Luke’s was preparing for its annual Blessing of the Animals. Bass was thinking of ways to get more people to come to the church with their pets. He also had been following a popular Facebook page that offered a steady stream of funny Catholic memes.

Combining the two, a social media marketing plan was born.

Bass started with the iconic image of the gray-bearded Dos Equis pitchman known as the Most Interesting Man in the World, who says in ads, “I don’t always drink beer, but when I do I prefer Dos Equis.”

It was a big hit when he shared it on his personal Facebook page. “I got a lot of comments from people,” Bass said. “They came back and said, ‘Do you have more of these?’”

Since then, he has produced or shared thousands of memes and cartoons for his Facebook audience, averaging 20 to 25 images a week. He typically updates the feed just on weekdays, with a couple memes to start the day, another couple in the afternoon or evening and a cartoon in the middle.

Some are meant to educate people about theological concepts, like transubstantiation, which got the “Princess Bride” treatment in a Feb. 11 meme.

Others aim to leave them laughing in the pews, like this Jeff Foxworthy meme that has been shared nearly 1,400 times since March 12: “If you think Nicodemus is a patch to quit smoking, you might need to stop sleeping through the sermon.”

Bass couldn’t identify a favorite, though one that sticks out in his mind featured Sherlock Holmes and his assistant, Watson.

Watson: “I say, Holmes, as an Anglican, how do you explain Eucharistic real presence?”

Holmes: “That, my dear Watson, must always remain a divine mystery.”

That generated a lively theological discussion in the responses. “I would answer with Summa Theologica Tertia Pars 73-77,” commenter Thomas Knight offered.

Bass usually takes weekends off from posting – but not from thinking up funny captions. That’s the tough part, given how many images he’s already created.

“That’s a lot to do, without repeating,” Bass said. “To come up with something that’s new and novel gets harder all the time.”

A meme from April 13 features Rod Serling and a reworking of Serling’s “Twilight Zone” opening.

“Imagine a church that seeks to serve Christ in all persons and respects the dignity of every human being. You have just entered the Episcopal Zone.”

Bass was happy with that one, which has been shared 2,300 times, though he said some people commented that the clever reference to the old TV show might be lost on anyone under age 50.

Sometimes he also shares images submitted by his followers, giving them credit. Generally, political memes are off limits. And he’s dabbled in other social media, but Facebook is where he spends most of his time and has found his biggest audience. Bass encourages followers to share his images wherever they wish.

Popularity rises, even after a hijacking

If you’re working in the digital sphere, part of your success is defined by what the industry calls metrics, so take a quick look at the numbers.

At the time of this story, Episcopal Church Memes stood at 68,843 likes. To put that in perspective, the Episcopal Church’s Facebook page is approaching 162,000 likes, while Episcopal News Service clocks in at a modest 11,500.

There are dozens of Facebook pages devoted to Catholic memes but only one tops Bass’ Episcopal meme page in popularity. It’s this one, with a staggering 300,000 likes. If you giggle at jokes about meatless Fridays in Lent, you may already be a Catholic Memes follower.

Bass said he keeps in touch with the administrators of that and other Christian meme pages, such as United Methodist Memes (43,000 likes), many of which started after his page.

“Some of what I put out there really could apply to any Christian meme page,” he said, particularly posts about the Gospel, though other posts appeal directly to Episcopalians.

One other number of note is 2,000 – the number of photos his timeline is quickly approaching. But that isn’t the whole story. In 2015, he had to start from scratch after his page got hijacked by a Facebook phishing scam.

“The next thing I knew someone had added themselves as administrator, closed me out as an administrator and took over the page,” he said. “I couldn’t get back into it.”

He contacted Facebook, which helped him shut down the page. All the images were gone, as were the page’s 35,000 followers.

“After having put all that work into it for several years and then just to have it all vanish overnight, it was depressing,” Bass said.

Bass still had a personal Facebook page and an “Arthur Bass, Attorney at Law” page. A third, “Deacon Art Bass,” is devoted to more straightforward Episcopal matters, but he took about a month and a half off from Episcopal memes. When he bowed to meme fans’ requests and started a new Episcopal Church Memes, it quickly gained back and even doubled his old audience.

That audience is so large now that he sometimes gets inquiries from companies interested in buying his page, because the tens of thousands of followers would make it a valuable marketing outlet, but he always turns down the offers.

He has never spent money on the page and never makes any money from it. The only marketing that interests him here is of a higher order.

“We’re trying to promote the church and the Gospel,” Bass said. “We’re doing it through humor.”