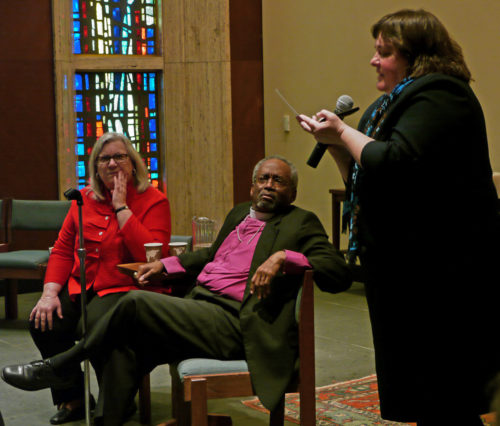 [Episcopal News Service] Presiding Bishop Michael Curry and House of Deputies President Gay Clark Jennings told women from across the Episcopal Church and throughout the Anglican Communion gathered for the United Nations Commission on the Status of Women that their advocacy is God’s work.

The UNCSW promotes women’s rights in political, economic, civil, social and educational fields, and makes recommendations on urgent problems regarding women’s rights. The conference has convened annually or biannually since 1946; it reached a turning point in Beijing in 1995 when it adopted a global policy framework for gender equality and the empowerment of women that identified 12 areas of critical concern.

Curry in his sermon during a March 21 Eucharist at the Episcopal Church Center said the UNCSW does more than “raise consciousness and awareness” about the issues facing women.

Participants also aim, he said, “to encourage the powers that be in the world to enact legislation, to engage policy, to change in ways that promote true human equality as God intended from the beginning, to promote ways to emancipate women that they might in turn emancipate their children and not only their children but their communities and their nations.”

“When they [women] get free the whole world gets free,” he said.

“This is about the survival of the human race. Your work of advocacy, of encouragement, of gentle nudging, or a little arm twisting, this work is nothing less than the work of God,” Curry said during his sermon.

Curry encouraged the UNCSW participants not to lose heart when the work is hard but to, instead, remember Esther, the biblical hero who saved her people. “Even when you don’t know it, there is a God and there is a Spirit moving through the corridors of power wherever Esther rises up,” he said. 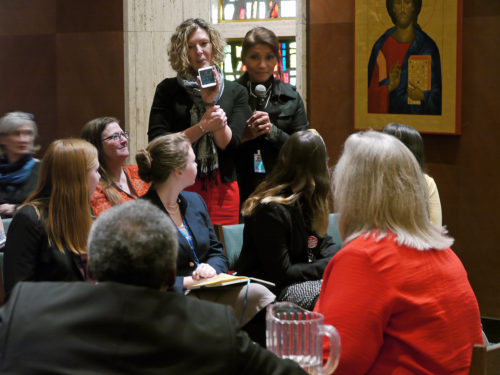 Lupe Ayllon Ruiz, Diocese of Central Florida, holding microphone, talks about her experience at the 61st session of the United Nations Commission on the Status of Women as Presiding Bishop Michael Curry and House of Deputies President Gay Clark Jennings listen. Angela Smith, Diocese of Western Kansas, left is translating. Both women are part of the Episcopal Church’s delegation at the session. Photo: Mary Frances Schjonberg/ Episcopal News Service

Curry and Jennings, who presided at the Eucharist, held an hour-long session with the delegates later the same day.

The issue of refugees and immigrants came up more than once during the afternoon session with Curry and Jennings. One question specifically dealt with the Episcopal Church’s response to people, especially children, fleeing violence in the Northern Triangle formed by El Salvador, Honduras and Guatemala in Central America. Some of them have wound up in U.S. detention facilities.

“These are our neighbors. Their human rights are being violated at home, in migration and then in our communities,” Jennings replied.

Warning that her answer might sound political, she said, “Building a wall will not make us great again.” Welcoming “everyone who comes to us fleeing violence and degradation; that’s what makes us great, not only as Christians but as citizens,” Jennings said.

Many Episcopal congregations and dioceses are trying to “protect members of the congregations and of their communities to ensure that inappropriate deportation doesn’t take place.” The issues are “heavy on everyone’s hearts and minds, and people are looking for creative ways” to respond, she said, urging the women to bring home to their leadership colleagues their insights and ideas from conversations at the UNCSW meetings.

One woman said she had just learned about gender-sensitive or gender-responsive budgeting, a tool for evaluating how budgeting choices contribute to the achievement of gender equality goals. She asked Curry and Jennings whether the Episcopal Church was looking at its financial commitments through that lens.

“The first thing I am going to do is go to Program, Budget and Finance and ask ‘Have you heard phrase gender-sensitive budgeting?’” Jennings said to applause. “And if not, would you please put a few people on to finding out what this is and how it impacts our budget development?”

She noted that Barbara Miles, a laywoman, chairs Program, Budget and Finance, the committee responsible for proposing a triennial budget to each meeting of General Convention.

Each session issues an “agreed conclusions” document. Delegates lobby for changes to the draft version for this session issued last month. The negotiators have been urging delegates to come up with practical suggestions of ideas that will work on the ground. The final agreement goes to the United Nations. If approved, the General Assembly expects member states to implement it.

Curry submitted an official statement to the session on behalf of the Episcopal Church. It highlights three priority areas to improve women’s economic empowerment in the changing world of work: promote women’s and girls’ access to education and gender equality education for all; expand socio-economic benefits that support women’s contributions at work; and, prioritize resources and programs for marginalized groups of women and girls.

The statement and its priorities are the foundation by which delegates advocate, and share their own stories, reflections and concerns. 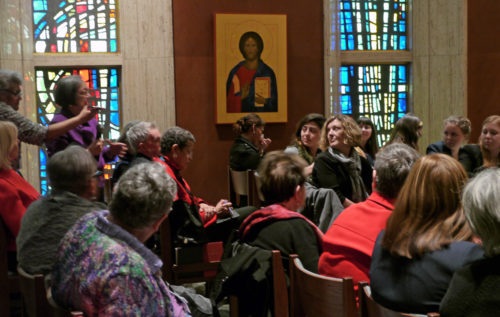 Erin Morey of the Diocese of Pittsburgh is the Episcopal Church’s provincial representative on the Anglican Communion delegation. There are 23 women from 17 countries in the latter group.

The Episcopal Church Center, located just a block from the United Nations building, is serving as a home base for Episcopal and Anglican women. Among the events was an opening Eucharist March 13 and a March 15 speech by Fereshteh Forough, founder and chief executive officer of Code to Inspire. There will be a closing Eucharist on March 24. In addition to these events at the Episcopal Church Center, Episcopalians have organized many UNCSW parallel events and worship opportunities throughout New York City, at the Church Center for the United Nations, and at churches in the Episcopal Diocese of New York.

The United Nations Press Centre’s coverage of the 61st session is here.