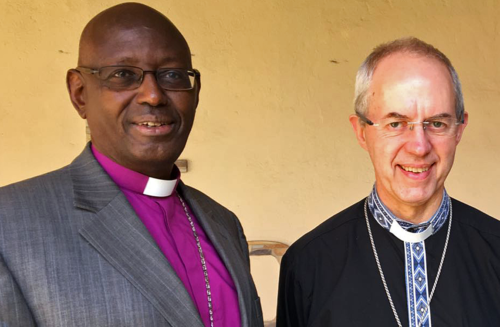 He succeeds Archbishop David Moxon who retires in June.

Born in 1948, Ntahoturi grew up in a small village in Matana, Southern Burundi, the son of a poor farming family.  After training at Bishop Tucker Theological College in Mukono, Uganda, he was ordained in 1973. He came to England to further his theological training at Ridley Hall and St John’s in Cambridge, where he is now an honorary fellow, and then at Lincoln College, Oxford. After his studies, he returned to  Burundi where he joined the civil service,  becoming chief of staff to President Jean-Baptiste Bagaza.  After the overthrowing of Bagaza in 1987 in a military coup, he was jailed from 1987 to 1990. In 1992, he became provincial secretary of the Anglican Church of Burundi until 1997.
when he was consecrated bishop of Matana Diocese. He became archbishop primate of the Province of the Anglican Church of Burundi in 2005.

Ntahoturi has served as chair of the Council of Anglican provinces in Africa from 2011-2016, and as a member of the Anglican Consultative Council Standing Committee from ACC  9-ACC 11 (1993-2012).

He has extensive ecumenical experience, having served as a member of the Central Committee of the World Council of Churches since 1998, and co-moderator of the Permanent Committee on Collaboration and Consensus which brings together representatives of the Orthodox, Anglicans and Reformed Churches. He has also served on the Executive Committee of ACT (Action of Churches Together) International and participated in the creation of the new ACT Alliance which is the ecumenical branch of the WCC for Relief and Development.

Ntahoturi has been active in seeking peace in war-torn Burundi and the great Lakes region of Africa, and has represented the protestant churches of Burundi during the peace and reconciliation negotiations in Tanzania, which were instrumental in bringing peace to Burundi.  He is vice chair of the Burundi Truth and Reconciliation Commission, and Chair of the Inter-Anglican Standing Committee on Unity, Faith and Order (IASCUFO) as well as being a serving bishop in Burundi.Archbishop Ntahouri already speaks French, English, Kirundi and Swahili and is looking forward to learning Italian!   He will take over from Archbishop Moxon in September 2017.

He speaks French, English, Kirundi and Swahili. He will take over from Moxon in September.

“I am personally delighted that Archbishop Bernard Ntahoturi has agreed to take up the joint post of Archbishop’s Representative to the Holy See and Director of the Anglican Centre in Rome,” Welby said. “The appointment of a former Primate to this post for the second time running demonstrates the importance I attach to developing the increasingly close relationship between the Anglican Communion and the Roman Catholic Church. Archbishop Bernard has played an immensely valuable role in the life of the Anglican Communion for many years both as a bishop and more recently as a Primate.  He also brings extensive ecumenical experience in Burundi, in the Anglican Communion and in the life of the World Council of Churches.  I wish him every blessing in his new role.”

Ntahoturi said he is “honored delighted to be chosen for this role, and am looking forward to continuing the work of the dedicated men who have held this post before me.”

“I would like to strengthen those areas, especially in peace building, where the Anglican Church and the Roman Catholic Church can work together for a common witness so that the world may believe and God glorified.”

Bishop Stephen Platten, chair of the Anglican Centre, said Ntahoturi “brings wide ecumenical and international experience and as an Anglican Primate in a predominantly Roman Catholic country. He follows directors from Eurasia, the Americas and Australasia and so broadens the base of the Centre in completing our continental spread. It is excellent that, like his predecessor, he is a former primate and serving archbishop.”