[Episcopal News Service] He felt attacked, and says so, specifically choosing the word to convey his strength of emotion. Yes, he felt personally attacked. But A.W. “Buster” Lewis also felt that R.E. Lee Memorial Episcopal Church in Lexington, Virginia–his parish–“as I knew it, was being attacked and that we needed to do something about it.”

Lewis’s feelings first welled up in the summer of 2015, when the vestry of R.E. Lee Memorial decided to explore the idea of changing its name of 114 years. The decision came in the wake of the June 2015 shooting at Emmanuel African Methodist Episcopal Church in Charleston, South Carolina, that left three wounded and nine dead. Quick on the heels of the shooting, the Episcopal Church passed a resolution at its 78th General Convention urging “…all persons, along with public, governmental, and religious institutions, to discontinue the display of the Confederate Battle Flag.” 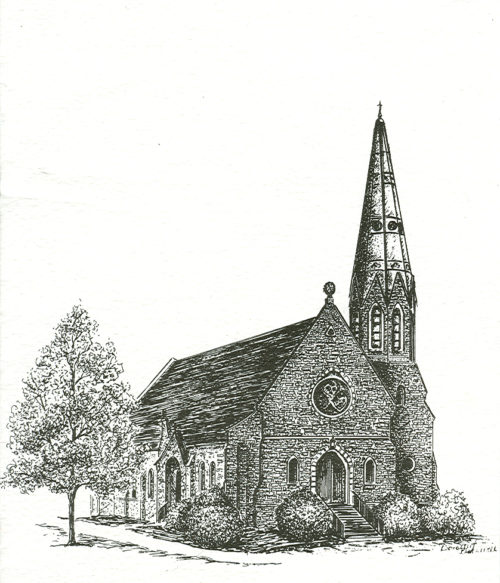 Confederate flags were not the issue in question at R. E. Lee, a reasonably large parish of 465 members in a small town of some 7,200 residents. Lexington is home to Virginia Military Institute and Washington and Lee University. Confederate generals Robert E. Lee and Thomas “Stonewall” Jackson are buried there, and the Appalachian Trail wends its way north just a few miles away. This university town’s rural surroundings and deep historical roots blend into its own ecosystem—one that feeds R.E. Lee.

“[Our parish is] a rather diverse community on the conservative-liberal spectrum,” says the Rev. Tom Crittenden, rector of R.E. Lee Memorial.

In that diverse setting, with the Charleston massacre looming large in the country’s conscience, a parishioner had written a letter to the vestry about the church’s name. The parishioner “just wanted to go on record that the name was not helpful to the mission of the church, and asked the vestry to consider changing the name,” says Crittenden. Given “the context of those killings and the Confederate memorabilia,” Crittenden says, “when [the vestry] received the letter, there was a general awareness that the name was on some level problematic.’’ With that awareness and with the letter as a catalyst, a discussion of its name opened up among R.E. Lee Memorial’s 465 members.

When Adams-Riley preached 11 days after the Charleston shooting, he spoke about the church’s visible, tactile links to the Confederacy. St. Paul’s vestry member Linda Armstrong remembers hearing that “it’s time for us to look at what message that sends to others.” The rector also spoke on “hate, white supremacy and white privilege,” she says. “It did make people think—people go to church and don’t really look around.”

With that, Adams-Riley had set St. Paul’s on its own path to discerning how the parish’s past and its adornments square up with its current identity and values. 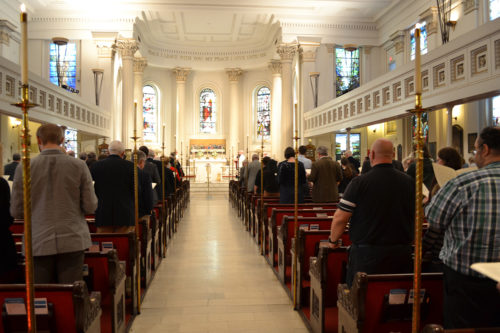 From Washington National Cathedral to the Diocese of Maryland, discussions linking history with the national conversation about race have sprung up across the Episcopal Church. Still, those conversations often feel stilted, defensive, too shallow or well-meaning—and consequently, miss the point.

“Part of why we cannot have open and vulnerable conversations about racism is because there has been so much shame and blame around racism,” Kim says. People of color are shamed for who they are, while white people are blamed for racism. “We have to do better [than that],” she says.

Lewis didn’t feel good about the conversation at R.E. Lee Memorial from the get-go. “The vestry, in my point of view, mishandled the whole issue,” he says. The governing body decided to consider the name change when many parishioners were out of town for summer vacation, and Lewis felt a lack of transparency starting with those first meetings.

Moreover, “I felt that the members for generations really, literally, had lived with this name almost as a source of pride,” he says. Since joining the church in 1972, Lewis says he had only heard one person question the name until the issue surfaced in 2015.

Crittenden describes a different experience. “I came here nine years ago and the name of the church was a topic of random conversation,” he says. The rector points out that his church was founded in 1840, more than a generation before the Civil War. Originally founded as Latimer Parish, it became Grace Episcopal Church in 1842. Robert E. Lee worshipped there after the war, while president of Washington College (today’s Washington and Lee University). The church became R.E. Lee Memorial in 1903, 33 years after the Confederate general’s death. “The church was not founded in honor of Lee,” Crittenden says.

The parish considered its name for four months with various activities, including town hall-style forums, small group discussions and a congregational survey. A deep divide quickly emerged between members who saw the name as “anachronistic” and out of sync with the parish’s mission, and those for whom the name expresses a “deeper history of the church within the community and Lee’s role at the church,” Crittenden explains.

When the issue came to a vote in November 2015, the vestry decided that the name change needed a supermajority to pass. It failed by one vote. The congregation has yet to recover.

This kind of outcome wouldn’t surprise Kim. “There’s no magic bullet” for success with racial reconciliation, she says—the process hinges on how people approach the work, and each other. Talking about race, even in a veiled way, requires a willingness to value everyone as the expert on their own life experience, rather than elevating a select few as experts, she says. From start to finish, “being in right relationship has to be more important than being right,” Kim adds.

A similar sentiment guides Don Edwards, founder of Justice and Sustainability Associates, a for-profit management consulting firm that facilitates “just and sustainable agreements around land use.” With years of land-use experience under its belt, JSA accepted its first racial reconciliation project about 10 years ago. As well as navigating the intersection of land and race, they have also worked with a handful of churches, including St. Paul’s. “Contextually, this is an area that is expanding,” Edwards says. “The Episcopal Church in the South is a particular portal” for such discussions about race.

Relics of the past, whether a name, plaques or needlepoint kneelers, ignited the conversations at both parishes. And through them, long-dead congregants live on, as they do through their descendants, some of whom attend the same churches that their families did generations ago.

“There is an element that we want to introduce that makes it as safe as possible for people to talk about their [ancestors] without having to take ownership of the choices their relations made,” Edwards says. In practice, this means understanding the range of views in a congregation, organizing small group discussions, fostering mutual respect, training facilitators and keeping a watchful eye on participants during emotional discussions

Adams-Riley credits Edwards with cultivating “a sense of welcoming one another and a sense of people being invited to share from the heart; a sense of honoring one another” at St. Paul’s. About 100 people attended the parish’s two prayerful conversations in August 2015.

Armstrong remembers well the conversations she attended as a member of St. Paul’s. When congregants had settled into groups of eight to 10 people, someone said that African-Americans find the Confederate battle flag offensive. “I don’t know that that had ever been spoken in a group, and I think people heard it,” she says.

With Edwards’s task completed, St. Paul’s moved forward. Confederate flag images inside the church were removed. Other items connected to the Confederacy remained—and their meaning is currently being reframed. And the History and Reconciliation Initiative formed. Armstrong chairs the group, which includes a history working group, another on liturgy and music and a third known as the memorial working group.

Working with a four-year plan, the history working group has dug into church archives and found other ways to understand St. Paul’s history. Once that process has wrapped up, the music and liturgy working group will figure out how those elements lend themselves to racial reconciliation.

Ultimately, the group aims to memorialize its past, keeping in mind “that part of our history is oppressive and it’s brutal,” Armstrong says. In the meantime, the congregation’s “prayerful conversations” continue, in the form of potluck discussions.  At the next potluck, in April, congregants will watch and discuss the documentary “Traces of the Trade.” The film’s director and producer, Katrina Brown, will be on hand for the event.

“We want to tell a whole and honest history [of St. Paul’s],” says the Rev. Melanie Mullen, Episcopal Church director of reconciliation, justice and creation care. Until March 1, Mullen worked as downtown missioner at St. Paul’s.

That desire holds the congregation together, Armstrong says. The process hasn’t been seamless, or easy. “It’s complicated…just the chatter was emotional for people,” she adds. While not everyone has gotten involved, most of the parish’s 450 active members have. “People have a sense, really, of being energized by this,” says Adams-Riley.

Armstrong expounds upon this sentiment. Although the word reconciliation implies an external reckoning or an apology, she expects an internal shift. The parish’s truth-seeking process “should transform not just who we’re seen as, but who we really are,” she says. As parishioners transform, they hope that St. Paul’s reputation as the “Cathedral of the Confederacy,” too, will metamorphose into the “Cathedral of Reconciliation.”

About 10 people who favored the name change at R.E. Lee Memorial, including two families with children, left in the wake of the vote according to parishioner Lacey Lynch. Lynch also rooted for the name change but wasn’t surprised when it didn’t pass. For now, Lynch and her family have stayed. With the vote behind them, though, fewer parishioners participate in church life. While the post-vote exodus was small, the tone of parish life feels dramatically different.  Lynch points to an “underlying tension; it’s hard to describe it.”

Like Lynch, Lewis has stuck with his parish, despite feeling attacked.  He thinks—and hopes—that the name change question has been put firmly behind them. For her part, Lynch articulates a different wish.  “I hope that there can be further discussion on [the name change],” she says, “because I don’t see it as politically correct, I see it as addressing what the history of the Confederacy means.”

R.E. Lee Memorial did not hire a consultant when considering its name, but the parish has done so to help in healing its resulting rifts.“I think the discussion and then the vote was a wake-up call,” Crittenden says.  “It revealed differences in the congregation that “mirror[ed] the divisions that were in our country in the last election.”

Guided by the consulting firm, the parish is “discerning how we more fully move to unity as a congregation, as a church family, and focus on our call to serve,” Crittenden explains.  The process, Lewis says, is going well. Nothing is more important to the R.E. Lee community right now than seeing it through, Crittenden says.

Advocates articulate solid reasons for choosing the path of racial reconciliation, from repentance to creating a more just world. Edwards, the consultant, an Episcopalian who grew up attending a black Episcopal church, adds another: With dwindling attendance at Episcopal churches, “you should think about the fact that where demand decreases, supply contracts.” A racially reconciled church opens its doors to a broader spectrum of humanity and is less likely to die out.

When you see any white Episcopal church, you have to ask, “What black church spun off from this church?” Edwards says. Reuniting predominantly white churches with black churches founded by white Episcopalians just makes sense, he says—and can only happen when congregants actually talk about race and their past. That reunion, “the closing of the loop,” as Edwards calls it; “there’s a kind of elegance to that and that motivates me because these people all share a religion, they all share a belief in God—one God.”