[Episcopal News Service – Hendersonville, North Carolina] In March 2015 in the aftermath of the August 2014 killing of Michael Brown in Ferguson, Missouri, the Episcopal Church’s House of Bishops decided it was time to write a new letter to Episcopalians about racism. Then, some of the bishops had a realization.

“The first thing that we said was: ‘We don’t need to write a letter. We need to deal with these issues ourselves: power, privilege and race,’” said Diocese of Newark Bishop Mark Beckwith, describing a late-night meeting of bishops who had volunteered to write such a letter that took place in Salt Lake City during General Convention in 2015.

The letter would have followed on one adopted by the house in April 1994 and another one issued March 22, 2006. However, Connecticut Bishop Ian Douglas said, it was clear that many of the things talked about in those letters “were still in front us.”

In the 1994 letter, the bishops concluded that all Christians were called to work for reconciliation and unity. “Central to this mission is the intentional transformation of all structures, systems and practices in the church and elsewhere that perpetuate the evil of racism,” the bishops wrote.

Douglas said “it was also clear that there were lots feelings amongst us that we were going to need to work on. So, if we didn’t do our work first, we didn’t feel like we were in a position to tell the wider church what to do.”

Beckwith and Douglas spoke to Episcopal News Service at Kangua Camp and Conference Center after they and their colleagues completed three days of intensive work on diversity and inclusion conducted by Valerie Batts and Bill Kondrath of Visions Inc. Those three days constituted the beginning of the bishops’ March 10-14 meeting.

A small group of bishops who were part of the Salt Lake City meeting worked in December 2015 with Visions, a non-profit group that says it helps people and groups thrive in a diverse world.

Beckwith said that work deepened the bishops’ desire to bring the process to the entire house. The bishops did some preliminary work during their March 2016 retreat meeting, making it the second meeting in a row during which bishops discussed racism 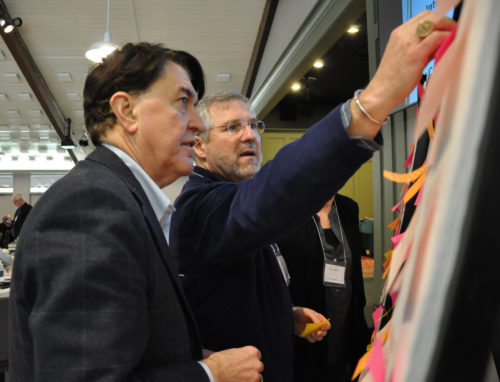 Heading into this meeting there was, Douglas said, “an appropriate reticence to come and do another ‘anti-racism training.’” Nevertheless, the large-group presentations and the time bishops spent discussing the material at their tables gave the bishops “some tools to recognize, understand, appreciate and utilize differences” to help the world move closer to the reign of God, he said.

The goals set out for the three days were to build a case for the church to engage in racial justice and reconciliation; establish common language for discussing that work, especially as part of spiritual formation; deepen the investment the house and the church have already made in such work; grow as a house in trust, vulnerability and community; and develop the capacity and skill for leading dioceses in such work.

Among the tools that Visions introduced to the bishops were guidelines for effective cross-cultural dialogue, learning about how societies can move from monoculturalism to pluralism and how many stories make up a community’s story, how oppression and change happen at various levels of a culture, exploring how various types of feedback are given and received, experiencing how feelings impact behaviors, discussing how to recognize “modern isms” as opposed to classic “isms” and how historically excluded and included groups approach those “isms.”

Batts and Kondrath anchored the three days in creating spaces of “sacred listening” in which the bishops could tell stories of their experiences that related to the learnings. The two consultants asked the bishops to consider their engagement in the world on four levels: personally, in their relationships in their dioceses,  in their role as bishops of the church and in the culture at large.

Douglas and North Carolina Bishop Suffragan Anne Hodges-Copple discussed those levels and all three of the days here.

Bishops participate in an exercise about the power of feelings on March 11 during the House of Bishops meeting at Kanuga Camp and Conference Center outside Hendersonville, North Carolina. Photo: Mary Frances Schjonberg/Episcopal News Service

Presiding Bishop Michael Curry presented the three days as a way for bishops to begin to exercise their role as reconcilers and to invite others into that role as well.

“This is a time of great chaos and upheaval in the country and the presiding bishop is calling us to the Church’s stance of a beloved and gracious community,” East Michigan Bishop Todd Ousley, chair of the house’s planning committee, said.

Curry also “reminded us that in many ways we have been bystanders and that in this particular moment … we are called to get off the sideline and to engage with something more than words … to not just give lip service to issues of inclusion and diversity, to check off that anti-racism box,” Ousley said.

Bishop Eugene Sutton of the Diocese of Maryland said that the work was leadership training “on how do we tell our stories and deeply listen to others, and how do we invite others into that conversation.”

“I can’t wait to go back and see how we get the whole church involved in this process that we’re doing now,” he said on March 10.

The three-day focus on such work, said Rochester Bishop Prince Singh, “is part of the larger umbrella of themes that we have gotten out of [the 78th] General Convention where evangelism, racial reconciliation and care for creation is a part of what we are doing this whole triennium.”

The bishops met for Eucharist late each afternoon. On March 11, the service focused on healing, including a litany of forgiveness written by Diocese of Albany Bishop Bill Love. The bishop, who also presided, said the service was the first of its kind for the house in at least the past 10 years.

Western New York Bishop William Franklin said on the second day that the work was “transforming our own house. Divisions are being healed, as witnessed by this powerful service that brought our day to an end.” 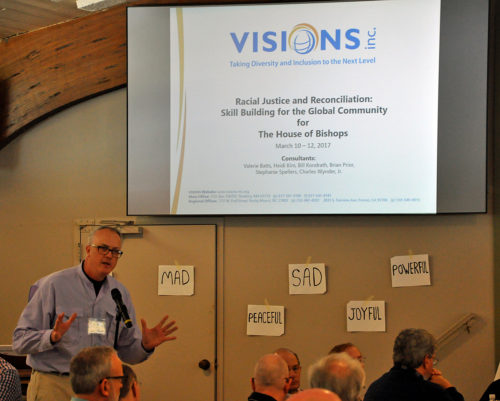 Springfield Bishop Dan Martins, who blogged about the meeting, said that the time allotted to conversations at each table allowed those with whom he was seated “to go deeper in some very profound ways than we’ve been able to do in the past.”

Martins, who calls himself “part of a theological minority” in the House of Bishops, told ENS the day after the three-day workshop he thought “a group of Christian bishops ought to be engaged in the subject of racism and racial reconciliation from a much deeper biblical and theological angle than from the behavioral and transactional perspective that we were given.”

Martins doesn’t foresee using any of the tools “in a formal, programmatic way” in his southern Illinois diocese. The most “immediately important” shift his diocese needs, he said, is a move away from an “attractional model” that predicts people will come to a church if they feel welcomed and Sunday worship is a “showpiece.” That is not a strategy for a post-Christian society, he said.

“So, I am trying to help all of us to embrace a strategy that is apostolic where we go to them,” Martins said.

“In the context of doing all that, if we uncovered opportunities for racial reconciliation, then, yes, we will certainly embrace those opportunities but that’s not a starting point; it would be more of a byproduct,” he said.

The Rev. Canon Stephanie Spellers, canon to the presiding bishop for evangelism, reconciliation, and creation, helped the house’s planning committee construct the three days. After they were over, she said, she felt the bishops accomplished the goals. However, she added, the work is not over.

“For Episcopalians, the work will always be inner work and outer work,” she said. “It’s figuring out what are my biases, what are my fears, what line of difference am I most terrified of crossing and how is God growing my heart. I have to be doing that even as I look around at systems and ask the questions about structure or racism, structural discrimination.”

While the House of Bishops has talked about racism for the last three spring meetings, Spellers said, “The conversations this time were not the same as the conversations last time.”

She hopes that the bishops always “go deeper” in the laboratory that is the community of the House of Bishops and that they “will model for the whole church the realization that this is a part of our lifelong spiritual formation.”